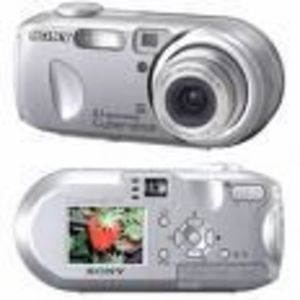 I purchased the Sony DSC P 93 cybershot digital camera several years ago, and I have not regretted it. It takes nice pictures (or perhaps it is the photographer?) and is very easy to use. I like the fact that there is a viewfinder and not have to only rely on the screen. I have a hard time just looking at the screen to see how the "picture" would look. Luckily with the digital camera, one has an opportunity to see how the picture looks like and either keep or discard it. With a regular camera you would need to wait to develop the pictures, sometimes to find that the shots did not come out or were blurred or off target. A digital camera is a wonderful device to have, especially now days with all the advanced features available. Although I love this camera, I may be looking for one that has interchangeable lenses. Other than that, this is a great camera.

This has been a good camera for us. It takes great quality pictures and didn't break the bank. It. It is easy to delete those pictures that don't turn out well in two easy steps.  It's great to have those memories saved for generations to come.

This camera is an all out good camera. I bought it used on eBay over three years ago and it has worked great all along. I like using the manual option to adjust the shutter speed so I can take shots of fast moving action. The shutter speed ranges from 30 seconds to 1/1000 of a second. It has red eye reduction and also has three different brightness flash modes. Great overall camera and not too expensive.    The video feature makes this camera a great alternative to getting a camcorder if you are not planning on doing a lot of video recording.  I set the camera at the best setting for video and can get about 12 minutes on a 1 Gigabyte Memory Stick.  Keep in mind that the video is fine quality 640x480 @ 30 frames per second. There is an audio/video output jack so you can use this to record to a video capture card on a computer.  It also has a USB jack so pictures can be uploaded directly to a printer (using PictBridge) or to a computer without removing the memory stick.  I recommend getting a 1 GB memory stick for this camera because I like to take photos using the full five megapixels so I can later crop the pictures without losing out on any quality. I use Powerex (made by Maha Energy Corp) 2700mAh rechargeable AA batteries and they last a long time.  I also have one of the Maha Battery chargers which maximize battery life by precisely charging the batteries to the level they should be.

This camera is perfect for recording family memories. It is not a camera you would want to purchase if you are looking to take pictures professionally. The video feature is excellent. The videos can uploaded to your computer and burned to a DVD or video CD. They can also be played on your television directly from the camera itself. You can get roughly 17 minutes of video recording time on the 256MB memory card. This memory card must be purchased separately as the camera comes only with a 32MB card which will not allow for very much video time but holds about 50 pictures, which can vary based on pixel size chosen. The carrying case is sold separately, but comes in very handy. There are several features that allow for different shooting scenarios. Learning all the scenarios and features would take a 3 to 4 credit hour college course, but if you're impatient like I am, or not tech savvy, the camera can be used easily via quick setup. It runs on two AA batteries. The best thing you can do is purchase two sets of rechargeable batteries and use one while you carry the other set in the carrying case. The battery life is only average, but that's to be expected with all of the features. The video feature will drain the batteries at a much faster rate than normal camera mode. The camera has an "additional zoom" feature that allows you to zoom to 3X in normal mode and then to 6X in "precise" mode. The precise-mode zoom can get sort of grainy but if you're patient enough to use the auto-focus feature, it comes out acceptable. The auto-focus feature is probably the most annoying feature as you have to depress the picture button halfway and wait for the camera to adjust (the wait time is only a second or two) and then press the button the rest of the way to take the picture. Then, after a series of flashes that could cause a seizure, the picture is taken. I have used several digital cameras and this seems to be close to the norm for Sony. This is not a camera for taking moving photos. If you need to record something that is in motion, I suggest using the video feature. The still-motion photography will come out blurry for something in motion. Again, this is fairly normal for still-motion cameras. All in all, a handy camera with great features for the tech geeks and photo enthusiasts, yet easy enough for someone who just wants record a few quick memories.