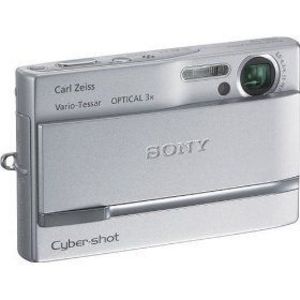 I've had this camera for years and have never had a problem with it. It is so easy to throw in my purse and take with me everywhere. I never have to carry around an extra camera bag, which is really nice when you are traveling. It takes great pictures and are super easy to upload to your computer.

The image quality is great, as in all sony that I have. I like it that it is small and easy to carry around and can take video as well. That way, I dont have to tote two applicances with me when we are sight seeing. The only thing I dont like about this camera is the special battery it uses. I used to have another sony which uses AA batteries and I'd loved the convenience of easily finding a battery replacement when we are in a rush. But now, we have to find the charger and charge it in advance. Well, I guess that the price to pay for having a compact camera.

camera is small and compat. it fits in you back pants pocket.  the camera takes long video if you have a large enough memory card.  it's like haveing 2 cameras in one small compact unit.  there are so many accessories you can purchase for this camera.  i love it! so may settings so you can get a really good picture an the push of a button.

This camera was purchased for my whirlwind 3 month tour of Europe.  After 13 countries and numerous dunks, drops and general mistreatment of this poor thing, it developed a crack in the LCD (still took pictures), and the focus was blurry after a few feet.Sent it back to Sony once I returned to the states (bought it in August of '06, sent it to Sony in May '07), expecting to get a hefty bill for the repair - after al, it was my fault!  I got it back within a week of sending it, and I originally thought they didn't even look at it.  Turns out, they had fixed everything within a day, and sent it back to me in perfect shape, at NO charge to me!Even though Sony's proprietary cards are a bit of an annoyance, their products and service really shine amongst a sea of mediocrity.

I'm here to review the Sony Cybershot T9 Digital Camera and some goods and bads about it. For the most part, I would say there are more goods than bads. But let's get the bads out of the way first. I used to own older Sony cameras before and with this new one, the same "issues" are still present. It may not be a problem to most but its utterly annoying to me. Its not easy to get used to. Firstly, after each snapshot, the camera takes a while to save or capture the image to the memory card. This means, if I move the camera after it "snapped" a photo, it may blur. I'm used to cameras snapping and be done with it. Its a quality feeling camera just the slowness o ftaking a picture takes getting used to. Another thing which was more of an irk was the sliding cover for the lens. I really didn't think a big cover for it was necessary. I'm more used to the auto open auto close lens on most other digital cameras. All in all, i love that it takes videos, pretty decent body for good protection and easy to use.

I am not too big a fan of Sony cameras, however, this one I bought for a family member and have helped them learn to use it. It has changed my opinion of Sony in the camera world a little bit, but I still am not the biggest fan that they have. The benefits of this camera are that it is small and light. It can easily fit into your pocket, purse, handbag or whatever and you can take it with you wherever you go. The cons of this camera are that the picture quality seems to be compromised by the size of the camera. It does not compare to pictures by my Canon camera and there seems to be more pixelation in parts. You also need a good case to keep this camera safe and prevent it from breaking - it feels very fragile. Overall, I think this is a good camera for someone who just needs one to play around with, but not a great camera for someone looking to take life long memories and keep them forever in good quality and all.

I was on a vacation to Japan several months ago, and right before I left for my trip, my Canon point and shoot died on me......so in a rush to have a quick point and shoot camera for my trip, I purchased the Sony Cybershot T9.  I have to say it's a good camera, but it could be great with a few extra features.  One of the things I particularly liked was the HD video capability, while it's only 720p, it's still great quality coming from a small point and shoot camera like this.  I also liked the touch screen, which was quite large compared to most screens you will see on small point and shoot-ers.  The touch screen allows for less buttons and more screen, which is always nice.  It has the normal program settings that you would expect from these cameras nowadays, as well as some in-camera editing functions (including some that are odd).  One that stands out is the ability to give a "smile" to someone who isn't smiling.  You basically take a picture of someone's face who isn't smiling, and it tries to manipulate the photo to make it look like you are smiling.  It really doesn't work properly, but it makes for hilarious pictures when done.  I would say it gives you a crooked smirk, rather than a smile.  Things I didn't like -- it could've had a manual function with more settings, that would've been nice.  Also of course, the Sony Memory stick, which is not compatible with other non-sony cameras.  I'm not so concerned with lack of optical zoom, as most point and shoot cameras have really weak zooms anyways.  Another thing that could've been improved was the battery life.  I could only take about 200-230 shots or so before the battery died.  Being in Japan and walking around all day, I had to ration my battery life so that it would last.  It would definitely help to get a spare battery.  Lastly, it doesn't take low-light pictures very well.  They are manageable, but not great.  I suppose that's why I ventured to buy a DSLR not long after my trip.  For it's purposes, it's a great camera to carry around for everyday use.  If you're looking to take higher quality photos, I would invest in a DSLR--but for the random person who just wants something to take pictures/videos with, this does the job.

This is a very competent compact point and shoot camera.  The camera is very light and small which makes it very easy to carry around with you, espically when you want to travel light.  The pictures are not spectacular but it does the job and is pretty clean.  This camera has lot of features and it would be wise for you to read the manual to familiarize yourself with the functions.  There is one thing tho, this camera, along with every other sony cybershot T series camera I have used, is horriable at taking pictures in very low lighting areas.  I understand it wont come out bring and perfect, but the pictures seem to be always blurry.  The only other cons I can see in this camera is that you have to use Sony propritary memory card.  That translates to EXPENSIVE compared to a microSD card.  If you know how to shop though you will be able to find some good deals on memory cards.  Battery life seems to be on the good side.  I have yet to take hundreds of pictures at a time yet, so I cannot really give a real good review on battery life.  Overall, this is a good compact point and shoot camera.

I normally shoot with a Nikon D300 & D200, and I own numerous compact cameras from Nikon, Canon and Kodak for travel. I bought this camera specifically for the HD video function and it's small size. It's one of the few cameras that will let you use the zoom function while recording HD video (Canon Powershots lack this ability). I miss the landscape stitch function in the Kodaks which is great for panoramic shots while travelling. Battery life could be better. 50 pics and 10 minutes of video and it's done. Get the second battery. I'm using the Aqua Pack for protection from the fine alkali dust of the Black Rock desert. Works well. The dive housing is expensive compared to Canon but at least it is available. I've used the Canon's on numerous dives and with it's small size you can actually enjoy the dive instead of fighting your camera's bouyancy. I expect the same with the Sony housing. Picture quality is OK. Colors are good but the small sensor shows lots of noise in low-light situations. The steady shot function works well. Smile function works as advertised. Not having a lens poke out when zooming is good for getting candid shots since people don't know you've zoomed in. It's common for users to put their finger in front of the lens when they use it since it's tiny and on the edge of the camera body. Make sure you review shots before you move on if somebody else uses it.

My husband was the one who chose the Sony Cybershot and boy am I glad that he did.  This camera does so much.  You can fix things that are bad or just make you look better. You can download them to your computer and then print them.  It has different options where you can put captions to your photos, you can categorize your photos by children, adults or pets.  This camera it can even fix smiles.  All pictures are very clear and even tho you may be moving it will take a still shot of whatever you trying to take a picture of.  We bought a red color because it is our favorite color but it comes also in several different colors.  It also has video so that you can make short video's.  It has been a great asset for us.  My husband and I don't leave home with out it.  Where you see my husband he has his Sony Cybershot with him ready to point and shoot.  So, we all have to be careful not to be doing anything bad because my husband WILL have a shot of it on our Sony Cybershot!