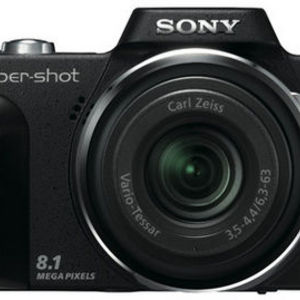 I researched for a while before making the purchase of the Sony DSC-H3 camera. My experience had mostly been with 35mm and I was fairly new to the digital world and what was out there. This camera allows you to use the memory stick and store pictures independent of the actual camera. You can then go to your favorite photo lab (or home computer) and view, select or discard any pictures before printing them. I was concerned about the picture quality since the camera is fairly automatic and simple to use, however, the pictures are very nice quality and people are always commenting on my pictures. The size of the camera I thought was a plus. It feels substantial in your hand and similar to the size of my NIKON's. I don't feel as though you get as much wobble from your hand being unsteady. The viewer is of good size and makes it easier to see what your photo will look like. I have recommended this camera to many young families as I think every family should be able to provide fun, fast, candid photos. An excellent investment for anyone wanting to preserve the past.

Sony Cybershot 7.1MP My only complaint is that I often use it to take a photo of a young child -- and it takes FOREVER for the photo to "take".  Therefore, I end up missing a lot of "in the moment" shots.  But the rest of the camera is great, easy to use, for trips it's perfect and for posed shots, I have no complaints.

I am writing about the Sony H3 digital camera. It has 8.1 mega pixels and 10x optical zoom lens. I am not a "techi" at all and I found this camera very easy to use. It has a mode dial that spins all the way around, so you don't have to back track, which makes it easier to use. The mode dial includes Auto Adjustment, which I use the most, Program Auto; which allows you to shoot with the exposure adjusted automatically (both the shutter speed and aperture value)., Manual Exposure shooting; allows you to shoot after adjusting the exposure manually, Movie Mode; which allows you to record movies with sound, ISO High Sensitivity; shoots images without a flash even in low lighting, Soft Snap; this shoots images with a softer atmosphere for shooting pictures of peole, flowers, etc., Advanced Sport Shooting; this feature shoots images by predicting the movement of the subject and setting focus, I also love this feature because it allows me to take pictures of birds in flight or anything that moves, which is really cool, Twilight Portrait, also another favorite of mine, allows you to shoot sharpimages of people in dark places without losing the nighttime atmosphere, Landscape shoots with the focus on distant objects, this feature is great because I can take such close up pictures of the mountains that I can see the detail in the rock face! Scene Selection lets you select different scenes; such as: Twilight (also listed above), Beach, which shoots ocean or lake pictures with the blueness of the water captured more vividly, Snow shoots scenes with the white more clearly, and Fireworks, which shoots fireworks in all their splendor.        This camera also has multiple flash settings. Flash Auto flashes when there is insufficient light or backlight, Flash forced on shoots with the flash on all the time, Slow synchro (flash forced on), the shutter speed is slow in a dark place to clearly shoot the background that is out of flash light, and Flash forced off is no flash.        The battery life is pretty good on this camera. When shooting still images the battery life lasts approximately 165 minutes, shooting roughly 330 images. When viewing still images the battery life lasts approximately 370 minutes, viewing around 7400 images.        I love this camera, I use it all the time. The picture quality is great, I rarely ever have a picture turn out grainy, I think I've only had one or two EVER turn out grainy and that was probably just an operator malfunction! This is a great camera to own.

This is my second digital camera and I bought it to replace the other one as my needs have changed over the years. This camera is 8.1 megapixels an 10x optical zoom. I played with it the first day I got it and was amazed that I was quickly able to find and use most of the functions. I already know how to set the timer to take a photo and still get me in the picture...I was never able to figure that one out on my other camera. Also I was just playing around and I took a picture at night  in the bedroom with the lights out  the room was  completely dark  and the picture came out like I had lights on! I ran out and printed the pictures right away to make sure they came out as good as they looked on the camera and they truly did. I would grade this camera A+. I have now had this camera 8 months and have tosay I still absolutely love it. This camera works in no light, low light, too much light, etc. it is one of the easiest cameras I have ever used.

I set out shopping for a digital camera with high expectations.  I had done all of my homework.  The Sony Cyber-Shot DSH-H3 was the camera I had decided to purchase.  It seemed to have all the options I wanted , at a reasonable price.  I am by no means a professional photographer.  I always seem to use a flash when I don't need to, or not use it when I should.  I have a tremor that causes even the most proclaimed "steady shot" cameras to produce blurred images.  I could go on, but I am sure you get the idea.   This camera has been worth it's weight in gold.  I cannot say enough about it's quality.  It truly has a "steady shot".  It has an auto flash that will go off when it needs to and not when it doesn't.  It takes videos.  It has 8.1 mega pixels.  It has 10x zoom.  It will take panoramic, portrait, or landscape pictures.  There is red-eye reduction, optional black and white, sepia toned, action/sports mode, automatic face detection, lowlight manual settings, etc.  The list really goes on and on.   The thing is, I saw that I would never learn how to use this camera.  It was REALLY EASY to use.  It produces BEAUTIFUL, pictures.  My families memories are in good hands.  It is  almost as a professional photographer follows us around taking pictures.  I really don't know how I ever lived without it.  I have now had any problems with it, but if I did there is a fool proof warranty from the wonderful people at Sony.  I would reccomend this camera to anybody.

my sony cybershot takes amazing pics. i would recommend it to anyone! great actions pics! I wanted something that wasn't so bulky but my sister convinced me to get this one and I am so glad she did! It was a great choice for me and my family! The con of this camera it isn't as easy to throw it in my purse and take it just anywhere!