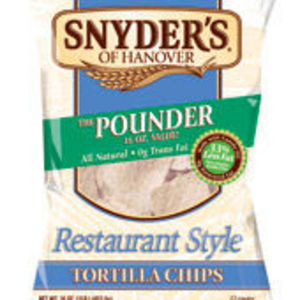 Snyder's of Hanover Restaurant Style Tortilla Chips are really good. They are very thin chips like you find in a Mexican restaurant. They are crispy and salty with a pleasant corn flavor. Snyder's of Hanover is as good as Tostito's brand tortilla chips in my opinion, and are often much cheaper.

We always keep tortilla chips in the house, but I was never quite happy with the flavor of the brands we could find in the store.  However, I noticed these chips (the yellow corn variety) this weekend and decided that for the lower fat content, it was worth a shot.  These chips are delicious and beat other store bought tortilla chips hands-down.....in both taste and nutrition.  I will be buying this brand of tortilla from now on.  As the previous reviewer stated, they are very airy and crisp and have a great flavor.  Try them.  You won't be disappointed.

I'm really becoming a big fan of the Snyder's of Hanover (SH) line of chips.  Being diabetic means you have train yourself to eat smaller and more frequent meals a day - which is great because that means more snacking! We wanted to have nachos for supper tonight and so we picked up the usual ingredients, except this time around I was searching for a better brand of restaurant-style tortilla chips.  I really like the new SH multigrain line of chips (which is actually lighter and airer, with a nicer crunch, than it's closest competitor, the SunChip) - and so, I went for the SH restaurant-style tortilla chips, expecting the same good quality I've grown to like.  And, I wasn't let down.The SH restaurant-style tortilla chips is probably the only chip product in the market I've had that is the closest in texture, crunch, and taste to anything a really good Mexican restaurant could offer - as a complimentary appetizer, or as an entree.  What I like most about those complimentary chips and salsa dishes at my favorite Mex restaurants is the fresh tasting quality - the sort of homemade tortilla that just came out of the fryalator, or oven, taste.  It's that when you get it served, it's warm and crunchy, rather than stale, or tasting like the bag it came out of.  The SH restaurant-style tortilla chips boasts 0 grams in saturated/trans fat, 33% less fat than regular tortilla chips (according to the bag) and no added preservatives.  Simple ingredients of a blend of white and yellow corn masa, canola oil, and salt.  So the real test was its durability as a nacho dish.  I was concerned that its light and airy texture would crumble under a bed of ground chicken, sauteed onions, flash-fried corn, salsa, and shredded cheese (that's what we had on ours tonight).  Or, that it would shrivel up and get soaked.  And, well, it passed that test too! Putting it in the oven seemed to bring out even more of that "restaurant-style" freshness to the chip, even with the mounds of pounds I laid on top of it.  The only thing I wish I hadn't forgotten at the grocery store was the avocado to make guacamole with! Oh well, there will be a next time ... and for sure, that next time will include the SH restaurant-style tortilla chips as the bedrock for my future nachos!