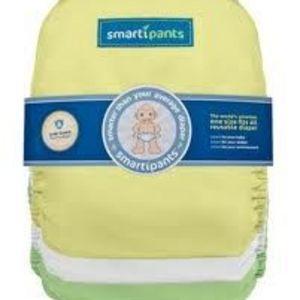 We received this diaper for free with our Bum Genius order and were pleasantly surprised by the fact that it is just as good as a Bum Genius! The snaps make it harder for the baby to take off of themselves and also are great because the velcro diapers make a chain in the washing machine.  The diaper has never leaked for us and we use the insert it came with as well as the Bum Genius diapers inside of it.  It is a little different because the pocket has an opening on both sides. I don't think that is necessarily a bad thing though and haven't noticed any benefits or problems because of the two sided openings. The colors that are offered are very cute whether you have a boy or a girl.  We have been using the Smartipants diaper for around 7 months now and it is still in great shape and seems to be holding up despite everyday washings.  No leaks yet so we are very pleased with the quality of it!

I tried the old fashioned cloth diapers when my first child was born. They were messy smelly, and added to the laundry I had to wash. Also my sons bottom was always wet and often urine dripped from the plastic pants he wore. I used disposable diapers wit my other two children as did my daughter with her first child. When she became pregnant with her second child she decided to use a modern version of cloth diapers. These come already to put on the baby and there is no need of folding or pins. They snap together with velcro. And there is a cloth liner inside. When I baysit my grandson I notice that often he is wet right down to his undershirt. His bottom is often red and he has diaper rash more often than did his brother or my children did. The diapers also have a strong amonia smell in the urine. My daughter leaves me plastic bags that hold the odor inside. Smari pants reusable diapers are a good idea. I keep disposable diapers on hand however.The smarti pants reusable diapers are a really good idea for a stay at home mom who has the time to do the laundry, but for women on the go you might want to reconsider. My daughter works from home on her computer so she has the ability and availability to deal with the what I consider the down side to this product. And she does keep disposable diapers on hand. This is what I would recommend. I do not see how a mother working outside the home can handle this but anything is possible.

Can't say enough good things about these diapers! I had three children in smartipants at one time--newborn (24/7), 2 year old (day and night training) and 4 year old (night training.) The opening in the front and back for the inserts rocks--if it's a poopy breast feeding diaper, I don't have to get my hands dirty--the inserts will come out in the wash! I choose to remove the inserts for any other type of wet or dirty diaper though because I think they get cleaner. I realy like the microfiber inserts- not quite as long as bum genius inserts, so there is no need for snap adjustments. Speaking of snaps--they are so great for holding diapers in place. The babies seem to figure out how to rip off the velcro cloth diapers unless covered by a onsie, but the snaps are strong enough to deter the babies from ripping them off. Fabulous product, I recommend to everyone new and experienced in cloth diapering!

When I had my first child, finances were tight so I decided to try to save some money on disposable diapers by buying cloth diapers. These Smartipants diapers work well for the most part, but if you are out for too long and didn't have another diaper to change your baby, they will eventually leak. Cloth diapers are more comfortable for your child, and saves you money, but I actually don't think you save that much in the long run. If you don't wash the cloth diapers by hand, and throw them in the washer, you will probably end up spending a lot more money on water and electricity, because you wouldn't wash your other clothes or laundry together with something that reaks of pee and poo. I switched back to regular disposable diapers and would only use the cloth ones if my kid was allergic or got a lot of diaper rashes. Otherwise, disposable diapers would save you a lot of time and effort.

These are my favorite diapers out of the three brands of one size diapers I have. They are really trim and not as bulky as the others. I love that they have an opening at each end of the diaper. It helps to stuff them quicker and the inserts come out by themselves in the wash. I have had leaks with these so that is why I only gave them 4 stars. My son is a heavy wetter though so maybe if I put an extra insert it them I wouldn't have problems with leaking. They fit very snug, so I think the extra insert would help. I love that they have, snaps as I have heard that the velcro on some diapers wears out quicker. I have heard concerns about the elastic wearing out so I don't out the shells in the dryer, only the inserts. I highly reccomend these!

I received a Smartipants pocket cloth diaper free for a Black Friday giveaway from my favorite cloth diaper website. At that point I had a FuzziBunz one-size and a Rump-a-rooz one-size, and had used BumGenius one-size (3.0). So, when I opened up the Smartipants, I was a little disappointed. It looked very chintzy to me, kind of cheaply put together and thin. But, I washed it and put it on my then 8-month-old. First thing I noticed was that it fit more closely than the other diapers, especially better than the Rump-a-rooz which was very bulky on my skinny little peanut. That was nice, but of course I still had to see how effective it was. Well, I was pleasantly surprised! It held up very well, absorbed for a good 2+ hours, which is what I expect out of most of the other pocket diapers (and more than FuzziBunz, if you are wondering). What seemed so chintzy and thin was actually effectiveness with less bulk, an ideal combo. I quickly increased my stash of Smartipants, and continued to be pleased with them. While they are not the MOST absorbent out there, they perform very well. A few other benefits:--The soaker has a green thread along the edge, which is so simple but I LOVE when it comes to stuffing because I use various diapers, and having the green thread makes them easy to pick out.--There are openings for the soaker in front and back so ideally you can just throw it in the wash and it will come out itself. I have had it not come out once or twice, so I just pull it out myself, but most of the time it works fine.--The snaps are strong, yet not so tight you have to fight to undo them. There are extra snaps on the back of one side to overlap for littlier babies.I have been using them steadily for 8 months now, and they are still in great shape. I anticipate being able to use them until this baby is on the potty, and with any future child I may have.  And being one of the cheaper pocket diapers on the market, they are a great buy, too!

We've been using SmartiPants diapers FULL TIME for going on two years and they have surpassed my expectations. They still look brand new, the fit is amazing, and they hold wonderfully over night. These are my "go-to" diapers, the first used and even DH loves the ease of use. No messing with dirty inserts, just toss them into the pail and on wash day just put them all into the wash. Never touching the "ickies" :)

I am not a pocket lover, but I did try the Smartipants because I knew I wouldn't have to pull the insert out of the pocket before washing and that appealed to me. I like the Smartipants very well and like the fit on my daughter. They work well for daytime use!

We are cloth diapering our second child, and have used probably 30+ different makes and types. We tried a Smartipants a few months ago, and completely and utterly fell in love! I am half tempted to have a complete stast shake up and stock up with many many more of these. The fit is amazing, price is good, suede cloth inner is perfect - stays really dry and repels poo, and the snaps are lovely and strong. The insert is a pretty standard microfibre, although it does seem to absorb a little more than the bumgenius one does. I know that bumgenius seem to be the most popular dipe out there right now but for me the Smartipants wins hands down between the two. I find them to be much trimmer fitting, they wash up better, and the quality is just as high but for a better price. Oh and need I say more about the insert that comes out on its own- A WINNER! If I had to name one downside- it would be that there arent any other insert options. Would love to see a bamboo insert or something for night time use. But you can always use other brand inserts in the Smartipants if you need to I guess and they will all fit. Smartipants, you rock!

I have tried out many cloth diapers since starting my cloth diapering journey 2 years ago when my daughter could not wear spoises due to her sensitive skin and her body would react to the chemicals. These smartipants are awesome diapers and are much less expensive then many other cloth diapers. What I love about them are they are eco friendly, great natural fibers on my daughters skin, no harsh chemicals, very easy to wash (they inserts don't even have to be removed like most pocket diapers you just throw the whole thing in the wash and the insert comes out), they are very easy to use with great snap closures (I really dislike the velcro diapers), they are very cheap compared to many other cloth diapers and seem to be made with the same quality, they wick moisture away from the babies bum and keep her drym they are made in the USA, and are super cute. I really have nothing bad to say about these diapers they are cheaper upfront cost and will save you 1000s