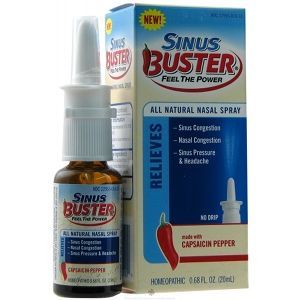 Ever wanted to get back at your sinuses for being a pain? well this product sure delivered a comeback to tame my sinuses and show them who is the boss. I think with the pain i experienced on first use, my sinuses will be scared to flair up again. I recommend this product 100%. It hurts like hell for a few seconds but then I get to enjoy hours of relief from my sinuses. I went from not being able to get out of bed to going into work. This is how much this product works.

If you have severe sinus problems this really works wonder for congestion. For the last few years I have developed bad sinus congestion, allergies, and headaches during the spring and summer. Effectiveness This really works quickly on sinus congestion and in turn it's great for relieving sinus headaches, well, if you suffer from headaches from a stuffy nose. Those are the main symptoms I suffer from during allergy seasons and this works really well for me. It's also great if you have congestion from a cold or the flu because keeping your sinuses clear will clear up your cold or flu more quickly. Ease of Use There is only one drawback to using Sinus Buster Nasal Spray and it's that you have to spray it up your nose. It can actually gag me sometimes, but it's really worth the sweet relief of sinus pain and congestion. Immediacy It works immediately on sinus congestion, which in turns has really helps sinus headaches. If you are tired of popping pills, then I highly recommend purchasing this product. There are literally no side affect, and you will get quick relief of sinus symptoms in minutes.

As a person with several chronic health conditions and poor response to Western medications, I've been slowly and routinely making the switch to more herbal-based medications and treatments to see if there is any difference in effectiveness. I've been on 4-5 different types of prescribed nasal spray, and none have provided me the consistent and strong congestion relief that this nasal spray has. I bought it on a complete whim from a Rite Aid and am glad I did. The instructions warn you that the sprays will be momentarily intense, and they definitely are (brace yourself), but they are certainly worth it. After using this product, I feel like I can breathe again. I heavily trust this product and would recommend it to others.

Purchased Sinus Buster Nasal Spray when of course my sinus' were acting up. When first using it, it hurts... BAD. It felt like the inside of my nose up into my sinus cavities were on fire. On a plus, it did help, it's just getting past when you first use it. It's quite painful.

I got some of this for my husband because he heard about it on the radio and wanted some. I finally found it at a store and got some for him. The first time he used it he literally dropped to his knees because it burned his nose so bad. It did a really good job at clearing up his sinuses, but it looked like it hurt. But regardless he has still used it since and it really helps him when he is stopped up. He seems to like it. He says he just didn't expect it the first time he took it so it hurt worse like blindsided him lol. I am afraid to try it, but his nose is always really clear afterwards and he is stuffy before it. So works good and if you don't mind a little pain then I recommend this to you lol.

I did not want to give this product a bad rating based on the fact that I might just be a big baby lol. I have always had sinus problems since I was a child. And so I am constantly trying new products. I tend to stay away from sprays becaise I hate the runny feeling after and having stuff drip out. But I decided to give this a try. The product does work. It was pretty fast acting too. Which is geat but wow its not fun to use. At all. It does burn and sting bad. I tried it and my eyes watered a bit lol. I have always been super sensitive when it comes to my nose so maybe it was just me. But it was bad enough that I will not be using this product again. I think the price is afforable considering it does work. So for anyone who is trying to find something to help with sinus problems. And haven't found anything try this. Just be ready for the burning or stinging. Be careful and go slow. Good product just not for everyone.

i heard a commercial for this product on the radio and meant to try it, but for for several months i forgot, mostly because my siunses haven't been treating me as badly this winter as they usually do. in November 2009, we had to cancel a trip to Disney World because i had come down with a bad sinus infection that kept me out of work for two weeks and without a voice for one week in the middle of that time. it took another week or 2 after that for me to really "bounce back" completely, and while this particular sinus infection was worse than usual, i tend to get them frequently, multiple times in a given winter. i've tried a number of different decongestants in different forms...different anti-allergy pills and nasal sprays...preseription and non-prescription...Neti pots and nasal irrigation bottles. then over the course of the past week, i've started gradually becoming more and more congested. it had gotten to where it was bad enough first thing in the morning to cause me some concern, that i might be on the verge of actually getting sick. strangely, right about then, i got a survey in an email regarding **Sinus Buster Nasal Spray**. it served as a kind of reminder and got me to actually go out and buy a bottle. the product sounds great. relief in a matter of seconds. it can be used for longer periods of time than other decongestant nasal sprays, which shouldn't be used for more than 3 days at a time. all natural, non-habit-forming. it certainly seemed worth a shot! the active ingredients in this stuff are eucalyptol and capsaicin. we're all familiar with the pleasant, sinus-opening scent of eucalyptus, but for those who may not recognize "capsaicin" right away, it's the chemical in chili peppers that makes them hot. even if you haven't read other reviews of the product, you can see where this is going. when using nasal sprays, i'm in the habit of spraying as i'm inhaling deeply so that i get as much as possible of the nasal spray where it's needed. based on some other reviews i've seen since plus my own personal experience, this may not be the best method. the radio commercial features a woman who has been congested for 10 days using the nasal spray and tells us that 45 seconds later, she experiences complete relief of her sinus congestion and pain. they don't actually let 45 seconds elapse, but time constraints aren't the only reason. if they actually played those 45 seconds on the radio, they'd go something like this: "Ok, here goes. *spritz* OH DEAD GOD, MY BRAIN!! IT'S MELTING MY BRAIN!! I CAN BREATHE *FIRE!!*" i'm only slightly exaggerating here. in lieu of screaming profanities, i opted to jump and flail about the room. seriously, it **b-u-r-n-s**!!! i turned rather red and had tears streaming down my face...but within a minute, i wasn't congested anymore! but again, it might be less painful if you're not inhaling deeply as you're shooting this stuff up your nose, but rather spraying and *then *inhaling. i haven't tried that method yet. but i can say that while it is painful, it's also effective. in fact, i haven't needed anymore since i first used it yesterday evening, probably because my sinuses now realize how naughty they've been and that if they do it again they will once again be punished by fire. whether or not the ~60 seconds of burning pain inside your head is preferable to day after day of sinus congestion is entirely up to you. i would highly recommend this product both to people experiencing severe, chronic sinus congestion who are desperate for relief that they can use for more than 3 days at a time...as well as people whose heads i'd like to set on fire.

I am forever getting terrible sinus headaches. I've tried tons of over the counter medications and just as many prescription medications. A few work a little but don't offer much relief for my sinus problems. And so many of the medications made to treat sinus conditions also cause drowsiness. I hate that drowsy drugged feeling. I need to be alert during the day. I heard about **Sicap Industries Sinus Buster Nasal Spray** and was willing to try anything that might offer me some relief. I really hoped it would work since it's all natural but I wasn't too hopeful. When I first tried it I was a little surprised by the stinging sensation in my nose. It was a little like the sensation that you get from biting into a hot pepper except in your nose. It wasn't bad. Just something to get used to. Within minutes of using the product my nasal passages were clear! I couldn't believe it! This product is great. It's a life saver for me!

After I first received this it just sat around for awhile.  I'm not always good with trying new products if they are going into my body.  I have allergies and get a bit reluctant.  Then lo and behold, I came down with a cold, which I hadn't had in probably six years.  Well, at first I just blew my nose here and there.  Well, that was feeble, so I switched to the neti pot.  That works great for me usually, but then, this was a full blown head cold.  I was getting desperate so started reading the ingredients.  Well, I thought they were unusual, capsicum annuum and eucalyptus.  Thought I'd give it a try, but forgot to shake it.  Well, I about flipped and read the instructions again.  I shook it thinking maybe that would disperse the pepper, but it didn't.  If anything it seemed even stronger.  One spray was all I could do.  I don't think I even got it very far in my nose.  It started my nose to running though which is a good thing if you are stopped up.  Despite the "hot" spray and the shock, I did a repeat later on and also the next couple of days.  Hey, I was desperate.  The ingredients were fine as far as I could see.  I don't use nasal sprays ever, only the neti pot and this one has such natural ingredients.  It could only go one better if it was organic.  I do recommend this product, but do have to warn anyone that the hot pepper is a bit of a shock.  We do use red pepper in our soups and teas for sore throats, so I suppose it should work for your nose too.