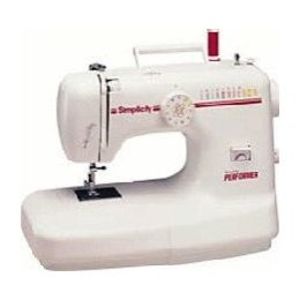 I have been a satisfied customer of Simplicity sewing and craft patterns for years, so thought I could count on the same quality in their sewing machines.  I have had this one for a while, but didn't start using it until recently because I was pretty happy with my old Riccar.  One of the reasons I purchased the Simplicity (other than getting a really good deal on it when I was a Joann's employee) was the free-motion quilting option.  As a quilter, I had planned on using this option quite a bit.  Sad to say, I am not going to be able to do that!  I followed all the instructions in the manual regarding settings and stitch selection.  Fortunately I decided to do some practice stitching before using it on the actual quilt.  After about two inches of stitching, either the thread breaks or the threads simply stop connecting, leaving me with a trail of thread on both sides of the fabric  but no stitches.  I contacted customer service at Simplicity, and was told that they don't actually manufacture the machines.  They directed me to the Tacony company which also manufactures the babyloc long-arm quilting machines.  I sent an email to their customer service, and did receive a reply in about 4 days.  She said it sounds like I am doing everything right, and suggested that I adjust the thread tension.  This was not mentioned in the manual that came with the machine, but I figured it was worth a shot.  She didn't say whether I should increase or decrease the tension (the thread's, not mine!) so I tried both.  I got the same results both ways.  I have tried changing the needle, changing the thread, speeding up, slowing down, and nothing seems to work.  Today, just for variety, I got to spend a rather frustrating 20 minutes reattaching the lever that controls the presser foot after it fell off in my hand.  The machine has not had more than about 25 hours of sewing, and I really didn't expect it to start falling apart.  The lever is (or rather was) attached in an almost inaccessible location, and it took me four tries of putting it on and taking it off and putting it on again before I finally got it back on in a location that would actually raise and lower the presser foot.  The machine does just fine with straight sewing, but I already had one that would do that!  The button hole foot is nice.  It allows you to lock in a size by using the button as a measuring tool, which eliminates the need to measure or mark the buttonholes on the fabric.  It also has 8 decorative or utility stitches which I haven't had the nerve to try yet after finding the free-motion quilting option to be such a failure.  The machine has a storage bin that is part of the machine.  You remove it when you want to use the machine for something small such as cuffs or hemming pant legs.  It does not come with any kind of cover, which would be nice to have, especially if you don't use the machine often and want to avoid having it get dusty.  The machine also has a tendency to walk away from you when you are sewing.  When doing any kind of sewing that requires putting any kind of pressure on the fabric, such as straight line quilting or stitching in the ditch, I have to continually pull the machine back into place to keep the sewing lines straight. I suppose I could put something on the bottom to prevent this from happening, but it seems as though it should stay where I put it.  It is very light weight, which is nice for those who want a machine they can carry easily or take to quilt group meetings, but this may also be part of the problem with it relocating itself.