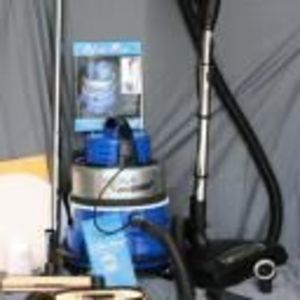 Absolutely LOVE IT! Best investment I've ever made! I was skeptical before the guy got here, and I had lots of questions for him. He answered every one of them, and he was very professional. I was as much impressed by him as I was the machine. It really was a no-brainer. Once he showed how well it worked and how not so well our Kirby was working I couldn't imagine letting him leave with it. I've had it for a few months now and couldn't be happier on how well it works. I read a couple of the other reviews that were negative and couldn't believe what they were talking about. I've had NOTHING but positive things to say about this machine and the company, Silver King who makes it. If ANYONE is doubting investing in one, I say go for it. I'm sure happy I did. :-)

My husband and I bought this vaccum in the fall of 2006. We paid a premium price even after it had been dropped twice. The vacuum is incredible for cleaning but has major design flaws in the power head which is needed to vacuum any of your carpets. We have had the pwer head replaced twice and it is now gone again. We simply cannot afford to buy a power head now that the warranty is up. Best we can do is donate to a vaccum repair shop so it does not wind up in a landfill. This was one of the most disappointing purchases we have ever made. Works great until it breaks! The connection on the power head gets loose and gives out after about 18-24 months. Maneuverability Easy to maneuver but kind of heavy to tug around Ease of Maintenance Cleaning after every use gets a bit old if you vacuum a lot. Suction Performance It really does a good job of cleaning when functional Design the connection between the wand and the power head has major design flaws

I was very skeptical when I had an in home preview of the Blue Max 2000 and their methods of getting in to show off the vaccum were a little dishonorable. However, I have had my Blue Max 2000 for several months now and I wouldn't trade it for the world. It picks up the messes of 3 kids and 2 dogs with no problem, the air purifier keeps my house smelling nice despite the fact that I am a smoker. Using the diffuser can make the house smell even better in any fragrance I want. All the attachments are easy to use and change out. It works great for dry or wet cleanups. I've used this vaccum to clean up dog hair from my floors beds and couches and it works wonderful. Problems with allergies in my house have gone down, problems with dust accumulation have gone down. The Blue Max 2000 is just so easy and fun to use that I, my husband and my kids all enjoy cleaning with it. When working on a project a few months ago we even used it to clean up sawdust and screws, it is so versatile we can't imagine our home without it!