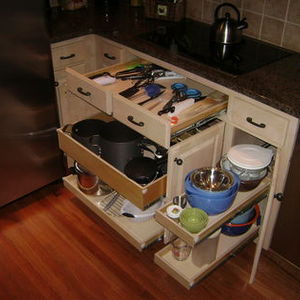 OK, I am the type of person who always looks for a deal. I almost can't help myself... when we had a deck put in, I must have had 10 contractors give me a bid, and I went with the lowest price. I did the same thing when I had pull out shelves put in. I only found 2 companies locally that specialized in custom pull out shelves, and had both come out to give me some options. Both companies on the surface seemed similar, I liked the sales people from both companies, and the product was a pull out shelf from both companies that from my untrained eye looked the similar, both had excellent references, and both were locally owned (ironically, both owners live in McKinney... which seems a bit odd). The big differentiation I could tell was one company was a small one man show having boxes built for them at a local wood working shop (I think in Denton), while ShelfGenie was has these manufacturered at their own plants. Not that it helped me make my decision, but I learned their largest manufacturing plant happens to be here in DFW, that provides pull out shelves to much of the country right from here. Both companies provided quotes, and ShelfGenie was more expensive... about 25% more. Why was ShelfGenie more expensive, which was the question I asked both companies. The company I didn't purchase from said because ShelfGenie is a franchise and franchises are always expensive. What ShelfGenie said was that the hardware, the more expensive grade of Baltic birch, the more expensive UV epoxy finish, the actual construction, and factory trained installers were the primary reasons for price difference. What ShelfGenie said was that because they are a franchise, they are able to purchase raw materials in massive volumes, keeping the prices down for consumers. Basically said that the difference is only 25% because of the collective volumes of pull out shelves being built is so high. If the volumes weren't that high, the price difference would have been more like 40%. I now had both quotes, one being 25% less, but a bit riskier because the company relies on one individual... if something happens to him, the company is no longer there. ShelfGenie was 25% more, but a less risky purchase. I would still receive the local attention, but everything would be guaranteed by a much larger national organization (the franchise organization). I made the decision that for peace of mind alone made it worth additional money and went with ShelfGenie for my pull out shelves. I happened to get a nice discount as well that I found in a local publication, a buy 5 get 1 free (again, I can't help myself but to try to find a deal). I have had my pull outs now for about 4 months, and absolutely love them. It seems the longer I have them, the smoother everything glides in and out. I use them every day, and can't say enough good things about the entire experience. I have even referred them to several of my friends and family, who have purchased for their homes, and have heard only good things. Good luck with your decision!

My designer spent 2 hours looking at all the items I had, and made a roll-out solution that stored everything perfectly! I have tall drawers for my cooking trays, short ones for my spices, a triple to hold pot lids, it's amazing. It's like getting a brand new kitchen. When I want something, I know where it is and just glide-out my drawer and grab it. I use 30% more of the kithen items I've collected over the years. They used to just all sit in the back of the cabinet unused. One of them had  a problem, it got stuck on the way out and the installer came out that day, sheduled a time and was within 3 minutes of his scheduled time. Easy, quality, thoughtfull. I can't say enough. Thank you Shelf Genie for my wonderful pull-out shelves.

I am not one to write often, but I just had one of the best experiences I have ever had with a contractor.  I have a kitchen with several challenges including two blind corners, a pantry that is unusually deep, and not enough space to store all of the appliances that my wife has purchased. Needless to say, we needed suggestions as to what we could do, which is how we connected with ShelfGenie.We saw an ad for pull out shelves in the Dallas home mag. Ironically, the picture of the pantry that was shown in theh ad was almost identical to our pantry.  We called Shelf Genie to have one of their designers come to our home. In the end, ShelfGenie listened to our issues and came up with several options.  We were very impressed with our designer, not only very friendly, but very knowledgable.It took a few weeks from the time we ordered until the installation day, which is what they said it would be.  It would dhave been nicer if it were a shorter time, but I understand that it is custom built.  The wait was completely worth it, as on the day of installation, Shelf Genie installed the pull out shelves within a few hours... I was expecting it to take an entire day.  The pull out shelves look great, work great, and we couldn't be happier.Highly recommend. http://www.pulloutshelvesdallas.com