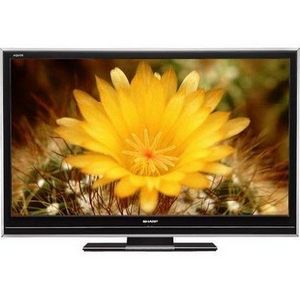 This was my first HDTV and i waited a long time before purchasing it. I had a 32 in old tube tv that weighed 100 lbs it seemed like and i bought a new house and decided i wanted a flat screen on my bedroom wall. I got my brother in law to put it up and boy was i happy. I hate to leave the comfort of my bed to watch tv. It has alot of the things i had no clue what a tv did these days and i love everyone of them. Picture Quality Love being able to set to my own settings, movie, ambient lighting, bright sun or dark room.....lots of ways to watch depending on the time of day.

Sharp AQUOS 42" LCD Television:Definitely a smart purchase, if you can find it for the right price. There are better television sets out there, certainly, but they do come at greater cost than the Aquos. Sharp is a reputable brand when it comes to producing quality televisions and products, at least from the experience I've had, and from what I've heard. This version of the Aquos has a nice bezel finish, but lacks the iconic chrome curve at the bottom of the television that earlier models of the Aquos series had. Regardless, it compliments any room either mounted on a wall, or on a television stand. Moving on however, the LC-42D85U provides very good picture quality, with 120hz refresh, and a 10,000:1 contrast ratio. It is important to note that most of those features are quite useless or unnoticeable without a HDMI source. With a HDMI source however, picture is crisp and clear, with a minimal amount of blur during high action sequences in television programming and movies. The features that you can alter on the television set are a welcome addition, but don't overall play a large role in one's viewing experience. The "Green/Energy Saving" mode is something those concerned about their power consumption and the environment would appreciate. It also has a wide viewing range, so the screen can be clearly viewed from just about any angle. Sound-wise, the built in speakers are decent, but nothing too great. They produce clear tones in the treble and higher end pitches, but they really lack on bass. It's not particularly noticeable during everyday television viewing, but during movies and the like, it is quite apparent. I would personally suggest investing in a quality home-theater speaker system to accompany the purchase of this television. Beautiful sound and life-like picture would be a lovely pair. The "Surround" sound mode does a passable job of recreating the effect of it's namesake, but to someone used to true surround sound, it's not even close. The high number of connections at the back is convenient when switching between several audio/video players that you may have connected to the television. The 4 HDMI ports are great for connection between a Blu-Ray player, or your computer, all at once without the tedious task of switching wires. The side connection area is also a convenient addition, which not all new televisions are equipped with. In a market saturated with complex, feature rich televisions, sometimes a simple and covenient touch is just what a consumer needs. Overall, it's a good buy. Not the absolute best, but for a money-minded individual looking for a good, feature rich television set with ease in mind, the LC-42D85U is definetely worth a look. You almost forget that it's a 42" and not 46" sometimes, that's how great the picture quality is. If you're looking to transition from an old tube television to a newer widescreen television, this could be just what you're looking for.

What is the first thing that comes to your mind when you hear Sharp Aquos? To me, when I first heard Sharp Aquos I expected quality picture, quality sound and to have one the best LCD TVs available. When I purchased this item, however, I got decent picture, sound, and overall an average LCD TV. I will not say the TV is not worth the price, but I did purchase this item on Black Friday for cheaper than it usually was sold for. I have not had any problems with this TV since purchasing it in December of 2009. I would highly recommend a speaker system for this TV. I know most consumers do purchase surround sound or home theater systems and I feel for this TV it is a must in order to get a full experience of a movie or TV show. Overall, I would recommend this TV if it were sold at a cheaper price, if all one wanted was an average LCD TV.

I have heard that Samsung and Sony make the best HDTVs, so I was hesitant to try other brands. I was trying to decide whether it would be better to get a smaller screen with a better established brand or a larger screen with a lesser known brand.  There is a wide spectrum in manufacters and sizes and I believe that this set is a good compromise between size and brand.  Sharp is known brand and 42 inches is a respectable size for my living room (we're a small family that has a modest living room).  After owning the TV for about 18 months, I can say that I have no regrets about purchasing this TV set.  It was easy to setup right out of the box and has been reliable ever since.  My only complaint was the on stuck pixel in the lower right hand corner of my set.  As I understand it, these occurances are purely by chance and can happen to any TV. I do not fault the manufacturer and am simply glad that it is not in a part of the screen that is often examined closely.

My dad bought us this TV last year for Christmas and what a difference from our old bulky regular TV. I had heard all about HD and 1080P but didn't know much about it. Wow what a difference in picture quality. I also love how much thinner and lighter it is compared to our old TVs. We bought a wall mount for the TV and were so happy to be able to remove our big bulky TV cabinet from our living room. The sound quality is great though I notice you have to set the volume level much higher when you play a DVD then when you are watching regular TV programs. One downfall is we have only had it 1 year and there is a thin line showing on either side about 6" in that runs from top to bottom of the screen. Isn't real noticeable but will be contacting them about this so we will see how their customer service is. Also love how you can see it well from all angles as we have 7 kids and love watching movies together. Thanks for the great gift dad.

The Sharp Acquos 42in LCD TV is the best TV I've owned to date. I consider the picture on a television to be the most important thing and I looked at many tvs when I decided to upgrade to a flat screen and the Sharp Aquos stood out because of it's great clarity and a crispness that I had never seen on another TV. Even now 2 years later, the picture is still superior to any other TV I've seen. This size is also a perfect size for a living room TV that is frequently watched. It's not too big and not too small. The television is incredibly easy to set up and has sufficient inputs for all of your accompanying devices. It has multiple component inputs and multiple HDMI inputs. The sound quality on the TV could be a bit better and is lacking some in bass and I feel that I have to watch my TV louder than I normally would on other tvs to compensate for the sound and be able to hear dialogue clearly.

I have had this TV for 4 years now and it is just wonderful. I have had no problems at all, no service calls or anything. This TV has very good sound and picture. HD quality is very good on movies. I thought when I first got this TV it would be too big for the room 42", but after having it awhile you dont even notice it, it seems like it just belongs. You really notice a difference when you go away for a while and then come back, it then seems much bigger. Its hard to watch TV on smaller sets after having this size screen, I am always glad to come back home again.  I would recommend Sharp TV, at least the Aquos, to everyone. I have never had a problem with Sharp electronics, they have always been dependable over the years. The picture is so distinctive with the 1080p and you can adjust the screen size to make it smaller or bigger, like a movie screen at the theatre. I would definitely buy another Sharp TV product.

I recently decided it was time to get a new flat panel LCD TV and the only one I would choose is Sharp.   I've had a Sharp TV - a little 13" since 1981 - and that TV is still working with a great picture.  Why would I buy any other TV!   My flat panel is great, the picture is perfect, color is good and clarity is excellent.  I highly recommend all Sharp TVs.

I found this TV easy to change settings and tweak the picture. The picture is clear from even the most extreme angles. There are enough connections for everything I need to connect.  I don't like how long it takes to turn the tv on, but this is a limitation of the ccfl back-light and is common among lcd tv's. The sound is good with the built in speakers, but I have found there is some distortion when using the virtual surround sound. I found that when watching an HD channel and an SD commercial came on the sound would be very scrambled. I finally had to disable the virtual surround sound. The picture quality is very good, the colors are crisp. The depth of color is more then I could ask for. The contrast ratio is very good, blacks are dark and whites are bright. This TV has a very good contrast ratio, other TVs advertise a high dynamic contrast ratio but this TV has a very high normal contrast ratio (normal contrast ratio is when the black and white are side by side and dynamic ratio is when the black and white are displayed one at a time).