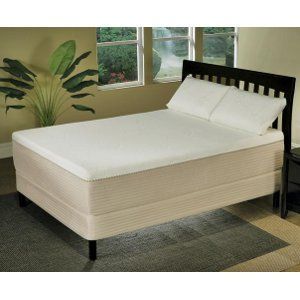 My experience with Select Foam, start to finish, has been awful. Many customers shopping for a Tempurpedic have considered them as a less expensive alternative. Don't. I was impressed with the Rhapsody Breeze bed offered by Tempurpedic and loved everything about it except for one thing - its price. After shopping around I found Select Foam who claimed to offer a very similar bed for a much better price. After reading site reviews and mattress-related websites, I felt confident enough to give them a try. When I was placing my order I saw that I was unable to choose the size foundation I wanted to go with the bed. I assumed they would naturally match the correct foundation size with the bed size, but I called them just to confirm. I was told that they would definitely match the sizes and that the bed would be shipped in three days. What I was not told was that the bed would come in pieces, with the foundation being sent in three days, the metal frame sent a few days later, and the mattress itself sent almost two weeks after the order had been placed. The foundation was sent in wooden pieces that you had to construct yourself. The included instruction page had been hastily copied and the image on the paper was at a large slant that looked very sloppy. Despite confirming the size over the phone, they still sent me the incorrect size. I ordered a queen size bed and was sent a king size foundation that juts out over the side by a about a foot and a half. As for the bed itself, it is far below the quality of Tempurpedic or Serta models which Select Foam has compared itself to. The memory foam barely contours to your body, and as a result the bed is far more similar to a normal midgrade spring mattress. At the price I paid the quality was simply not there, and the difference compared to the Rhapsody Breeze and even my wife's off-name memory foam bed showed this bed to be vastly inferior. With those brands, from the second you lie down there is no question you are sleeping on a memory foam bed. I would not have known the select foam bed was even memory foam if it hadn't been for the name. At this point I called the lackadaisical customer service. They picked up on the second try and refused to schedule a return until the customary 30 days had passed. I pointed out that they had sent me the wrong product and that I was absolutely certain I would not keep the bed, at which point Dwight said he would put in a request for me to see if they could resolve the issue. I asked him to CC me on this request so that I had a record of it, which he agreed to do but never actually did. When I called the next day, I was told that they would not take back the foundation or do anything to resolve it until the 30 days had passed. When I asked to speak to his manager he refused and claimed that "there is no one else to speak to." Conveniently enough, he happened to have no power to fix anything and blamed it on "the policy" but was also the only person you could contact to resolve any problems. I pointed out again that they had sent me the wrong item, a problem that should be resolved immediately, but was told no exceptions could be made. They did not even offer to send me the correct size or apologize for their mistake. If I had to describe their customer service in one word it would be "evasive." I'm not sure what I'll do with such a large foundation for a bed size I don't even own, but apparently that is my problem and not theirs. I would strongly, strongly advise any consumers to stay as far away from this company as possible. The quality is not there and the customer service is awful and entirely unhelpful. Make sure you work with a brick and mortar store who can be held accountable instead of this shoddy company. If you are concerned about the price of Tempurpedic then look into the Serta iComfort brand instead. It is a comparable price to Select Foam, has proven quality, and is from a reputable company.

This is the first thing I've ever bought online. I was so nervous! I had to call and speak with someone. I can't just give my credit information to a darn computer! Juan at Selectfoam was very nice and listened to me describe how awful my back feels early in the morning. I don't want anything too stiff! I told him. he listened. He told me to get the Aurora because it's soft on top and firm in the middle and feels perfect. He was right! I love my new bed and I feel so much better in the morning time! Thank you so much Juan!

I've never bought a memory foam mattress before and I really wasn't sure what I was getting into! Select Foam was very helpful in answering all of my questions about density and height and everything. Be prepared to wait a little for shipping. I received my mattress in about 7 days.

Okay lame review title but it's true. This memory foam mattress is crazy comfortable and totally inexpensive compared to other companys. If you're going the memory foam route you need to check out this bed and the company Select Foam. They claim to have almost exactly the same memory foam as tempurpedic. I was definitely unsure, but they have a free trial offer too so I went for it. Legit.

Foam Mattresses you would think are better than plush mattress because it offers extra soft support that comforms to your body. However, there lies in the problem. It is so soft that it contours to your whole body, providing no support in the middle back area. You end up sleeping in a U shape that makes your back ache after a few days of use. I'm a back sleeper / side sleeper and it doesn't work for me. We moved the foam mattress to our guest room and our guest seem to be fine with it, but the consensus is that they wouldn't want to sleep on it for longer than a week. So if you are needing a soft mattress, I would go with something other than this foam mattress. Plus, it got hot and didn't remove heat very quickly or evenly.

I was really skeptical about the claims made by the makers of memory foam mattresses. But then we moved into our last house, which was an old house, and the master bedroom was up a long, twisting, narrow staircase. After doing some research, we discovered that we could either sleep on twin beds or buy a memory foam mattress. Because memory foam mattresses are delivered rolled up, they can fit into much smaller spaces. Although we had no personal experience with memory foam mattresses, we chose this option because it was the only real option available. We decided on the Select foam mattress because of the good reviews and also because of the good prices. And we were not disappointed. This is the best mattress that I have ever slept on. I knew it was comfortable, but I had no idea how comfortable it was until I travelled and spent the night on another bed, while I was pregnant. The whole pregnancy I had been boasting that I was one of those women who just didn't have trouble sleeping while pregnant. But after tossing and turning all night ans waking up stiff and sore after one night on a 'regular' bed, I realized that it was just the mattress that had been keeping me comfortable. Our mattress is still holding up well after 4 years, and 2 moves. Although I will say that it is heavy and awkward to move around. Fortunately, though, it can be re-rolled and is carried much more easily this way.

the select foam mattress is the bed of my wives dream and she will forever be grateful for that resaon!I had originally bought this mattress for one of my tenants in my apartment building and she loved it.Not only did she love it my wife urgd mr to buy her one and that she would never want another mattress!what can i say! after countless years of searching for a wonderful mattress my quest has come to an end!I also want to thank the company for making such a great mattress.You cat even imagine how wonderful this mattress is until you have slept on this mattress.It is a dream!you will always by one of these once you take the oppurtunity to take a little cozy nap on one of thes bed!I could go on and on about this mattress but im pretty sure i wont have enough room.I will also say no cons but lots of pros about this devinere mattress.Buy this and sleep with assurance and glory.zzzzzz.!!!!!!

i dont like sleeping on a rock but apparently my boyfriend does because he insisted on buying this mattress and now my back is insisting on aching all day. im not usually picky, i love sleeping and could sleep anywhere EXCEPT ON THIS MATTRESS. its crazy..way too firm i new i shouldnt have let him pick it out but he got his way and i have aches and pains. great, there are no springs, but id gladly take my spriny mattress back in a heartbeat and be rid of this one! i've been sleeping on the couch and i dont know what to do because at this point we cant return the thing and im stuck with it and im NOT buying another one. so i guess im stuck on the couch and hes in the rock hard bed and thats that. also, it weighs a TON. forget changing sheets easily if your bed is against a wall because you will need to be practically a heavy wieght championto move the thing. i neve thought id get so rworked up abougt a mattress. sheesh.

I really like that these mattresses are American made.  I'm sure Swedish mattresses are good but they're a lot more expensive.  And Asian mattresses aren't made of the same chemicals apparently (does anyone else know about this?)

I love it, my girlfriend loves it.  The dog lovesss it (but he'l sleep on newspaper, he doesnt count)  You can't do better.  This company offers a free trial too if you are skeptical.  We were at first, but sleeping on memory foam is soo comfortable!  There's really no going back once youve tried it.