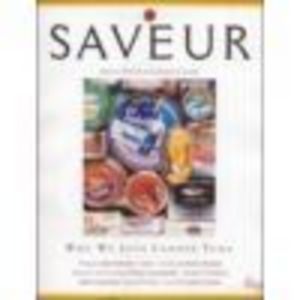 My husband and I like to cook. We cook all of our meals, maybe eating out or having frozen pizza once a week. We are not chefs and we haven't cooked a ton of things, but we like to venture into different foods and cook different things. Saveur shows the way we would like to cook all the time. It tells stories with food and it's a beautiful magazine if you truly like to cook. It is not buy a mix from the store and add stuff to it, it is real cooking with real ingredients and all of its complexity. This is not a magazine with meals to quickly make at home. It doesn't feature a ton of recipes either. It provides a story about the food and at the end provides recipes to make it. They feature worldwide cuisine. If you're looking for a magazine that shows authentic food or a magazine for a chef, this is the one that you want to get. It's my favorite magazine for all the complex meals we like to make.

Do you enjoy great eating, great drinking, and gourmet cooking? If so, then **Saveur** would make a good choice of magazine subscriptions for you. This publication is one of many magazines printed by World Publications and it brings the world of food, beverages, and travel to your home nine times per year. **Magazine Commentary:** "Saveur" is one of the best magazines of its kind on the market today. This publication is perfect for anyone who enjoys good food, good drink, and adventurous travel. There are recipes found throughout each issue, and there is often as much emphasis on travel as there is on the food or drink. I have been a subscriber to this magazine for a couple of years. Given that food, drink, and travel are among my favorite guilty pleasures, a magazine like "Saveur" makes the perfect addition to my home. Until I received a complimentary subscription in the mail, I didn't know much about this magazine. Because of its name, I always assumed it was geared toward upscale, more expensive food. While it's true that Saveur is focused on wine and fine gourmet eating, there is a substantial amount of writing on other topics, including travel and more casual dining options. With a combination like this, Saveur is an obvious choice of magazines for a person like me who is often traveling, seeking out new foods and beverages, and sampling new products. I was surprised when I discovered the emphasis on traveling that is such an important part of this publication. This isn't travel in the usual sense- it is travel with an emphasis on people and cultures. The magazine will describe, say, a specific style of wine and will then follow the story with a list of places to visit where the wine is produced and festivals to attend that include the wine in question. Or, Saveur will highlight a specific location of the world, talk about its food specialties, and then let you know when and where to visit. Recipes are found all throughout this magazine and many of them are foods that readers will find very intriguing. Some examples include recipes for Pesci, Capretto Brasato, Lamingtons, etc. Many of these require ingredients that will take effort to find. But there are also some recipes for more ordinary cuisine, like sausage rolls, Italian bread, and other common foods. What I like is that the recipes are more than just simple lists of ingredients and basic instructions- they often include detailed instructions and advice that go far beyond what most people need to understand a recipe. They go all- out, thoroughly explaining what to do without insulting the intelligence of the reader. The magazine also serves as an educational guide for readers who want to learn more about food and/or fancy beverages.   **Bottom Line Viewpoint:** Overall, Saveur is one of the best among the world's many food- oriented publications. Saveur doesn't just describe common foods with a shallowness that is common with other magazines. It combines information about the people who make the food so great and travel facts so you can quickly plan your next trip. The combination of food, beverage, and travel (along with so many mouth- watering recipes) makes Savuer a must for those who love to indulge in the finer things in life. It's a first- rate magazine from World Publications.

Honestly, I don't always, or even often, use the recipes in Saveur, but I love reading it. The articles are engaging and well written. If you want to step outside of your food comfort zones, or simply learn more about food, this is a good magazine to do that with,

Sophisticated but unpretentious, Saveur magazine travels the world gathering the best ethnic and artisinal recipes.  Saveur is a magazine that is not too snobby to dedicate an artice to homey southern cooking while also painstakingly instructing the on reader how to prepare an authentic bouillabase.  Saveur is the best of all worlds!