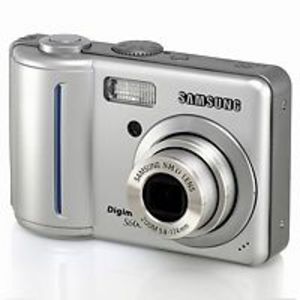 This camera was a gift and the first one I ever had. Samsung - S600 offers a crystal-clear 2.4-inch LCD and a 3 times optical zoom in both still and movie modes. In addition to its optical zoom, the S600 provides a 5 times digital zoom, achieving a total zoom of 15 times when used together. It is pretty awesome camera in itself and I had to let it go only because it fell pretty hard and broke pretty bad. It also features seven scene modes including: Landscape, Close-Up, Sunset, Dawn, Backlight, Fireworks, and Beach & Snow. The best part I liked about this camera was in- camera setting where you have option to edit the picture. The resizing function can be used when short on memory and want to save some space. It also comes with rotating function which enables to rotate the pic before saving. So basically you can edit your pics on the go without the PC. The only thing I did not quite like about this was the color. Had I bought it myself I wouldn't have got this one, else it a superb camera.