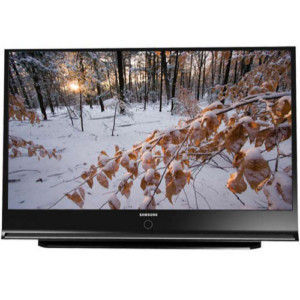 dear samsung the Samsung 61 in. LED TV HL-T6187S is very good locking tv but you must devoleped the programmes or juste maket smarth. thank you

Hi my name is Kelly and I hope to clear any bad thought away in your head about the HDTV Sansung TV. Well really what I'm going to do is be truthful. The truth is this things is awlsome. If you have'nt seen one of these TV'S go see one. Look at how clear the picture is. If you want, you could see the bumps on sum of favorite stars faces and laugh cuz you know wat they going threw. The sports feel like your almost feel like your almost in the game. I got hooked after the first day I brought mine home. Also it make your house look like it has a little more class for sum strange reason. Another thing is it's great for video games. You try playing halo 3 on this TV better yet play fightnight round 3  or anyversion just to see how realistic it looks. Then play on a regular Televison, you will see very quickly how much different and better things is looking. It's almost embrassing how pitful an old television fails to compare.

Excellent picture, great performance, and nice, efficient LED engine.It may not have the best picture available Even the new Mitsubishi bulb based DLP's have a slightly better picture, since they use the newer TI Darkchip4 DLP.The 750 comes in bigger sizes, 61" and 67". The 750 has an LED light source that should last the life of the set. No bulbs to replace.

We had this tv for almost a year now.I Love it , Work great!!  The newest version have picture-in picture and i'm jealous. Anyway , hubby was the one who made a purchase so he probably tell u more than i do. Here is the review from my hubby : OK, I'm picky, but read on :) I'll try not to state the obvious about bulb-less (LED) TV's but there was a small misconception when purchasing this TV. PROS: Excellent picture (duh!) With true RGB Light (ala LED's), the result is very deep colors Makes a *GREAT* PC monitor, 1080p at it's finest Lightweight, 75lbs Skinny dimensions, fits nice and close to wall Neutrals: With lightweight comes flimsiness, cabinet flexes easy. Cooling fan, why promote a device as "solid-state" (e.g. no moving parts) when it's not? CONS: The onboard speakers are !!AWFUL!! Only 3 HDMI ports? NOTE: When first purchasing this TV I was under the impression it was "solid-state", I was wrong, there is a cooling fan that remains in operation while the TV is turned on. This may not be a big deal to most however it is a moving part and moving parts tend to fail. I would also expect the fan to get dirty over time and tend to wear out, which may be an issue in a couple years. I will need to be sure to vacuum the vents out every so often. (WHEW!) The ACTUAL Review: The first thought that came to mind when hooking up the new TV is that it tended to flex if pushed on the top. Not a biggie since it won't move much, just don't bump it :) I expected it to be heavy as well, but given it's size it definitely is light to move around. I won't go into the Pros much as they've been well promoted in previous reviews. Yes the picture is awesome as the ads say, and being 3 different light sources (LED RGB) , you will get the fullest color of any consumer priced TV out there. This TV mainly gets used as my PC monitor as well as some regular TV time. Hooking up via HDMI is a breeze however there was a slight confusion when doing so. YOU WILL NEED TO LABEL (see the manual :P) the HDMI port as "PC" or else you will get overscanning! Overscanning happens when the picture received from the device comes in too big to fit on the screen. Oddly enough, my NVIDIA graphics software couldn't correct the overscanning itself (with the overscan option) PC Gaming with this TV is off the wall, matched with a nice PC and graphics card you'll swear certain games look real to the touch. One thing I would expect though is more HDMI ports, 1x DVR box, 1x PC, 1x soon to be bluray. That will leave out the possibility of future devices such as gaming consoles. Unless of course I use component video, but who wants that! :) Finally, the audio woes. Yes folks, the audio is below average in quality. No amount of adjustments physical or via the menu could satisfy my ears. The sound output is loud but poor in the fact that voices sound almost muffled or a tinny sound to it, when watching sports for example the cheering crowd almost sounds like they're cheering under water. I will definitely expect to buy a surround sound speaker system shortly as a result. I thought my previous Sony 57" had poor speakers but I was wrong. Well I tried to keep this short, but believe it or not I am VERY happy with this TV overall. The given quality is superb and the price is very right considering the flat panel market has dropped so much. I will expect bulb-style DLP's to disappear once LED tech becomes a little cheaper to produce

I recently got rid of a RCA DLP tv, after two years they gave me all my money back, so I was in the market for a new HDTV. I knew DLP was the way I was going to go, when I heard that Samsung made one without color wheels I was hooked. And I got hooked on a wonderful tv.Like others, I had to adjust the color to my liking, but other than that. it is all good.It took a little while to figure out how to change sources, but once that happened it is a pleasure to use this TV.The HD signals from my outside antenea come in clear and strong.The tv warms up quickly and is very quiet.Well worth the price and only 88lbs to carry around