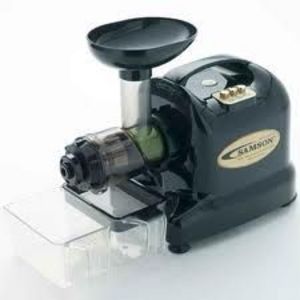 Overall a good juicer, just not great. Issues abound: 1. Customer service is pretty lousy once you own the juicer. Don't call them with questions!! You're better off, calling juicing people to ask them for advice. When I called them about maintenance, it was made pretty clear, YOU ARE ON YOUR OWN. My auger has issues with the turn style locking device that over time, stops locking in the auger. Their suggestion? tighten the screws yourself! If you don't like the way it juices, buy a new auger! No advanced information given. Pulp Setting Effectiveness There isn't a way to change the pulp setting because the screens are it. I find that the screens work "okay" but not fantastic. When the auger has problems, the screen does NOTHING to keep the juice from leaking all over the counter, and backing up into the motor if you're not careful. Stability While in Use Again, the problem is in the design: the auger is only held into the machine by a twisting lock that doesn't lock, really. It holds the auger, sort of, but mostly the plastic housing that directs the material from the auger through the screen, then out through the nut that clogs endlessly. It can, and does have issues with the auger coming off and clogging mess when it doesn't work right. It IS quieter than a LaLane Juicer, and other spinning juicers, at least you won't have to worry about vibration problems. It also will juice SOME herbs well, which is better again that spinning juicers, that will NOT juice any herbs/grasses/etc. Ease of Cleaning Best feature of the juicer. It cleans easily with the 'toothbrush' that comes with the machine, that cleans all of it. No basket to empty or shooting catcher shoot to empty, only your own bowl that will catch rope size fiber leftovers. Durability I have had it for 4 years, it should be trouble free at this point, and it's not. The auger is impossible to figure out if it needs to be replaced, nor is there any trouble shooting that comes with the juicer. It gets hot easily and fast. Versatility/Number of Features It CLAIMS 5 possible uses, but frankly, I tried using the meat adapter to grind meat: uneven and too much stress on the engine, in my opinion. Perhaps, if I had frozen the meat it might have been better, it ended up tearing the meat, which wasn't what I had in mind for making sausage. The price of a pork shoulder to see it ruined was criminal. It supposedly can make pasta, again, I worry about these product endorsements from Samson. If you are looking for a pasta maker/hamburger grinder/sausage maker, et al, I would suggest either a champion OR a Kitchen Aid mixer that has the horsepower and better made parts for doing this work. At one time they had an oil expeller, that was supposed to be excellent for pressing your own oil: it was recalled for burning up the machines!! They have a vegetable grinder (sort of), that frankly makes spiral cut thin, thin, and uneven cuts. It doesn't work well for potatoes, that I can say. I wouldn't do this myself, it falls off the machine (again the holding twisting "non locking" lock fails to hold the blades in) as you are using it. I am only giving this a '5' because of the so called number of skills it claims to do. i would be happier with less features, that WORK. Design The shoot for veggies/fruit is awfully narrow, requiring much prep work. No matter what you do, it's a time involved process, and the best feature of this machine is clean up. It has a reversal feature for whatever you intend to grind in the machine, that's nice, but really WHAT IT NEEDS is a LOCK device to lock down the blades (for heaven's sake!) and better customer service, rather than a spacey "Oh wow, man, I don't know..." or "do it yourself...". I didn't buy an expensive juicer "to do my own maintenance." AND no help from them!

I definitely vote a ten out of ten for the Samson 6-in-1 because of all the various features that it has. You can actually just press a button and change the amount of pulp you want in the juice. Great for families with different tastes. Also, you can make more than just juice with it (think pasta). It is super quiet in comparison to other models. It is super easy to assemble and takes less than five minutes to pull it apart and reassemble. If you have a hard time with instruction booklets, look no further for there is a magical dvd included with a video on installation and usage instructions! Genius! This is a very sturdy model and it never runs across the countertop when in use. I highly recommend this juicer to anyone who wants to love using the machine! Ease of Cleaning If you want you can just throw the whole thing in the dishwasher! Best feature of them all! It also does not build up as much of the pulp or leftovers as other machines do. It seems to just use up the whole fruit/vegetable!

I purchased this handy six-in-one juicer two years ago at Target. I would definitely recommend this juicer for anyone who is in need of a reliable one. Pulp Setting Effectiveness The pulp setting effectiveness is exactly how it should it be. Depending on which setting I choose, it provides a little, a lot, or no pulp at all. Stability While in Use This machine is very sturdy while in use. It does not shake or vibrate very much at all while I am using it. Ease of Cleaning Most juicers are very difficult to clean, but this one is not so bad. I just wipe it down with a wet, soapy sponge or rag. Durability I have owned this juicer for over two years, and I have never had any issues with it. It works just as well as it did the first day I purchased it. Versatility/Number of Features Considering the fact that this is a six in one juicer, I can definitely say that the versatility and number of features of this juicer is its strongest and best aspect. Design The Samson six-in-one juicer has a modern and sleek design that I truly adore.

I bought this juicer couple of weeks ago; I use it every other day and so far so good. This juicer does an astonishing job. It is, by, far, a superior and high quality juicer with nice features. What stunned me at first was how quiet this juicer was unlike other juicers that are currently on the market. This feature comes in handy especially in the morning when you crave for a freshly made juice while other family members are still asleep. As far as its performance goes, it has never disappointed. It presses approximately 90 percent more juice than any other ordinary juicers. I use it mostly for fruit (grapefruit, oranges, raspberries, blueberries, blackberries, and grapes) and veggies (mostly cucumbers, spinach, and carrots). It is quite impressive how this juicer totally eliminates the waste I was encountering prior to this acquiring purchase. All in all, this 6-in-1 juicer delivers an outstanding quality and performance. I strongly recommend it to all juice lovers.

Years ago I had one of those stainless steel centrifigal juicers. More often than not, I had to stop the blasted thing before I was done, either because the basket was unbalanced or too full. In either case, I had to stop and empty it. Then cleaning it -- OH, don't even ask! One day, I neglected to clean it. I kept putting it off, again and again. Then, I just took it down to the basement, where the dried carrot pulp turned to concrete. So, when I found the Samson Juicer on BetterWayHealth.com -- and it was on sale, with FREE delivery -- I bought it. How excellent is that?  Putting it together was a dream, because it comes with a DVD, so you don't even hafta read an instruction book! The gear speed is slow, which means that flavor, and more importantly, nutrients aren't destroyed by the higher heat of the higher gear speed juicers on the market. When it comes to cleaning, the DVD is right -- the machine can be taken apart, cleaned and reassembled in less than 5 minutes. This is a juicer I can live with and use everyday -- sometimes even more than once a day. Or if you really want to, you can just put it in the dishwasher I haven't tried making pasta, nutbutters or any of the other things it does yet. Maybe someday I will. But even if I don't, I've already received MY money's worth on this purchase!