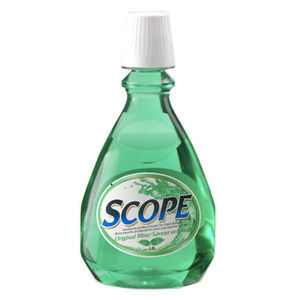 I love this mouthwash. It leaves your mouth refeshingly clean and fresh. It's not to strong. If your looking for all day protection, this is the one. It last longer than any others I've tried. I give this a 9 out of 10 only because there is always room for improment. I have used this product for three years. This mouthwash is not harsh, and does not burn like others. It comes in several different flavors, mint is my favoritve. It helps with all types of bad breath, even garlic. Just try it and you'll be hooked like I was. You can find coupons for it all the time. Which you can also match with a sale. Which will make it really cheap to try. I let the teenagers use it also, but they add a little water to it. They say it's a tad to strong for them. You won't be dissappointed in it try and see it might end up being your favorite too. If still dobuting it they have trail size you can try for cheap.

I use scope as an after brushing rinse and gargle. I have use other brands but refer Scope because of the taste, and the lower "harsh factor" of its feel. I like the way it leave my mouth and breath, and it does last until the next meal. The cost of the product was more economical than other products. Also, coupons are readily available which increases the savings on Scope as well.

The original scope, I feel is still the best mouthwash. I have used it for years and always feel it leaves a fresh feeling in your mouth and takes care of any worries of bad breath. I have always kept a small bottle in my desk drawer at work as well, for those days that we have lunches in the office. Less worries of not having fresh breath at work as well. I have tried others but the minty taste and fresh feeling I get from Scope have made me decide that it is the only mouthwash for me. It may have alot of competition but I am happy with staying with a product that gives me such a secure feeling. I work with the public so I love that I do not have to worry abouth my breath. If I have any negative input, the only complaint I would have is that I find the new caps which you must squeeze and turn very difficult for we "older" folks to manage. I can get it but not as fast as the screw caps.

Scope Mouthwash is a great, refreshing mouthwash that gets the job done. It has just a nice and subtle minty flavor that is not too overpowering or strong and it doesn't sting your mouth the way others can. Scope mouthwash is a great way to clean your mouth when you want to clean beyond just brushing and flossing. Sometimes brushing and flossing just doesn't feel like enough, and this mouth wash is a nice addition to the standard daily dental routine. I have used this mouthwash a great number of times, and compared to Listerine, I would say the minty flavor is nice, but doesn't last as long after using. It isn't quite as strong, which could either be a positive or a negative, I suppose, depends on how you want to look at it. When you put this mouthwash in your mouth, it just has a pleasant flavor, not one that makes your eyes water and want to spit it out immediately. It freshens the breath nicely, but it doesn't leave me with that feeling that the germs and bacteria have been killed. But, I do think this is a great mouthwash and a great thing to use when you need an added boost of cleanliness to the dental routine, or, if you are low on time and don't have quite enough time to brush. Overall, it's great, if you like a nice, mild, minty flavor that is easy to use without leaving a burning feeling in your mouth. Would use again!

I am an avid mouthwash user, and have tried every mouthwash on the market, mainly because I buy whatever is on sale. I am a fan of Scope's mouthwashes. They taste very nice and minty and I find that they don't give me the burn that other mouthwashes such as Listerine do. I'm able to swish this in my mouth the full amount of time without bouncing around trying to count as fast as I can so I can spit it out sooner. I have not noticed that this mouthwash lasts any longer than other brands, but I also haven't noticed it not lasting as long as others. The price is right on pare with many other brands also, so there really is not much that's going to set this mouthwash apart from the rest other than it doesn't have a strong burn, it's a more mild and gentle mouthwash. If you prefer that kind of mouthwash and/or you like the taste of Scope better than it would be a good buy, otherwise just get whatever's on sale. Most of them are the same to me.

I've tried many different brands and varieties of mouth washes over the year and I'd have to say that I really like is this Scope mouthwash the most over other mouth washes. I like how I getting this clean refreshing feeling without the slight burning sensation that would not allow me to take more time to gargle and use the mouthwash longer. Using this scope mouthwash is a breeze to use and although I use other mouthwashes, I always come back to this one sooner or later, Also, this was my "go to" mouth wash when I had lip piercings because I knew my mouth would feel clean without my piercing stinging from the mouth wash so that was a huge plus back then. The price is good and you get a good amount of it too. Also, I like the mint flavor as well so that's another reason why I chose to purchase this mouth wash. And I like to buy the little mini scope that you can use on the go.

I have only nice things to say about the classic Scope Mouthwash. I have been using it for years and it is still my go-to mouthwash. I usually have a regular sized bottle in my bathroom and a travel size one in my purse. Its wonderful minty flavor is perhaps the best part. It leaves your mouth feeling clean and refreshed. Unlike other mouthwashes, this classic mouthwash and its flavor do not have a terrible or odd aftertaste that may leave you feeling sick afterwards. This usually happens with me when I use other brands, especially those that do not have alcohol in them. In fact, I like the slight tingling or burning sensation that you get with Scope mouthwash (depending upon how long its in your mouth). It is just enough to know that your mouth is clean, yet not so overwhelming like other brands, such as Listerine, where that is all you can feel and perhaps even taste. As for the packaging, the bottle is easy to hold and the cap is nicely shaped so that you can pour a mouthful of the mouthwash into it and sip from it. Overall, I would highly recommend this mouthwash to others!

I like Scope mouthwash does a pretty good job as a mouthwash. Not to strong and leaves that soft smooth after feel after each use. Not to strong smelling and one cap full is just enough. Does not cost as much as some other top name brands does and comes in a nice size bottle. Does not sting as bad as some other brands do. Like to buy this brand when on sale often times you get a good deal.

I am not a fan of the quality of this mouthwash! I do not think it is very strong and I have only tried it once. I will not be using it again for that reason. To me, it just tastes like mint water and my mouth does not feel clean at all after I use it. I want to know that the mouthwash I use is really cleaning my mouth and I want my teeth and gums to feel fresh after I swish. I do not get that feeling from using Scope. My usual mouthwash really wakes me up in the morning and I noticed that Scope does not do that. I know that Scope is reputable company and a lot of people use their product; that is the reason I tried their mouthwash in the first place. I was very disappointed. I do not feel the cleaning power of Scope is very strong and also it tastes terrible. Another problem I have with Scope, is the cost of the their product. Scope is more expensive than it should be. It is not a quality mouthwash, therefore I should have not to pay more for it! I will definitely not be recommending this mouthwash to anyone, nor will I be purchasing this mouthwash in the future.

I have used Scope in the past and found it to work very well. It made my mouth feel very clean and it actually feels like germs could die from the clean feeling Scope mouthwash provides. AND, it actually does kill germs and helps to keep away bad breath which is an added bonus since I tend to get dry mouth overnight from sleeping. Brushing alone does not make my mouth feel as clean as when I combine it with Scope twice a day. I like that it is extra insurance in keeping my mouth from getting cavities! My favorite flavor is the peppermint because it does not have that burning of my tongue sensation that certain other mouthwashes have for me. The cost is about 3.00 per bottle and is available at my grocery stores, local drug stores and on line retailers like amazon.com or walmart.com. I would definitely recommend this product to anyone looking for a good mouthwash that helps keep your mouth clean, germ free and assists in preventing cavities.