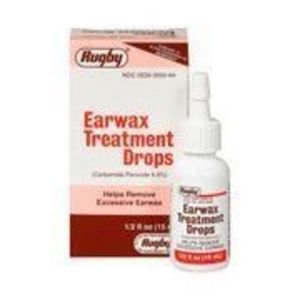 I have no idea why my 12 & 1/2 year old son accumulates an extraordinary amount of earwax, but he does. He's a beach bum and a waterbug, and it seems to me that as much as he swims around in the ocean, pools, and the river, he would have more ear infections or water stopping up his ears than excessive earwax, but that isn't the case. When my son was younger, his pediatrician would remove the excessive earwax. His pediatrician has repeatedly said that there is nothing wrong with my son's ears, he just has more earwax buildup than many people, and he would easily remove it. About a year ago, the pediatrician told me that I could begin removing the earwax at home with the help of Debrox Earwax Drops and a rubber bulb syringe. When I went to the drug store to purchasea bottle of the Debrox drops, I saw a box of **Rugby Earwax Treatment Drops** on the shelf beside the Debrox Drops. I compared the two and saw that both drops contained the exact same ingredients, and the Rugby Brand had "Compare to Debrox" on the box, but the Rugby Drops were less expensive, so I bought and used them. They worked very well then and they have been working very well since then. The process of removing excessive  earwax is simple, and you will get the best results if you have a rubber bulb syringe on hand and follow the directions included in the box. **Directions:** "*FOR USE IN THE EAR ONLY." **Adults and children over 12 years:* - *tilt head sideways and place 5 to 10 drops into ear* - *tip of applicator should not enter ear canal* - *keep drops in ear for several minutes by tilting head or placing cotton in ear* - *use twice daily for up to 4 days* - *remove any wax remaining after treatment by gently flushing ear with warm water using a soft rubber bulb ear syringe* **Active ingredient: **"*Carbamide Peroxide 6.5%"* **Inactive Ingredients: ***"Citric Acid (anhydrous), Glycerin, Propylene Glycol, Purified Water, Sodium Acid Pyrophosphate, Sodium Citrate (anhydrous), and Trolamine."* **As with all OTC medications, please read all of the information provided in the packaging before use. ** These earwax removal drops are effective and easy to use. I recommend them and certainly wouldn't use them in my son's ears if they didn't work, were painful, or if my son had ever had any adverse reactions during or after I use them to remove his excessive earwax. 5 stars for a product that works very well and costs much less than a visit to the doctor.