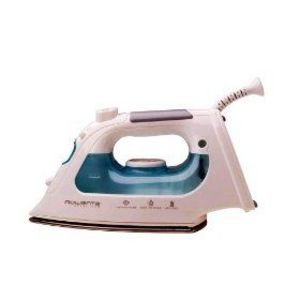 2 months after Warranty expired, this iron started spewing out water with each use. Cleaning cycle as explained in manual did no good. Then the auto shutoff started activating with each use after 20 seconds. Shaking the iron helped somewhat, then didn't help at all. Shouldn't a Rowenta last and perform better than this? Will never buy another,

The iron worked well for the first few months. I sew clothes and a good steam iron is very important. But as time went on, the dial that you use to turn on the iron and to set the temperature, got harder and harder to turn. After about a year, I could no longer turn it on. I called the company, and they wouldn't do anything to make it right. This wasn't a super-cheap iron. Performance The stainless steel bottom would get brown from time-to-time and would have to be cleaned with a special iron-cleaning paste. It is messy, but if you don't do it, you can get brown stains on your clothing. You also have to be careful after you clean it, because some of the residue can stay in the steam vents and end up on your clothes. If you are ironing something large, like a tablecloth, it keeps turning off every 30 second or so, and blinks red. So you have to hold it up until it stops blinking. Safety It is safe, as it turns off if it has been more than 30 seconds horizontal. Also, if you leave it sitting upright, without moving it, it shuts off. And, of course, once the dial has aged sufficiently, you can't turn it on at all, so it is very safe... No worries! Ease of Cleaning Using the cleaning paste is messy and it is difficult to ensure all the paste is out of the steam vents. Ease of Use As I said, once you have used it for less than a year, you won't be able to turn it on at all. It is frustrating. It requires cleaning too often, which is a very messy operation. Durability It is useless in less than a year. If you can't turn it on, it is useless. Design The dial to regulate the temperature, and to turn it on/off gets stuck in time and you cannot use the iron anymore.

I just received my new Rowenta Effective DX1700 iron as a Christmas present from a friend.  It has the features that I was looking for and does a good job.  The vertical steam feature works well, better than my old iron, delivering a lot of steam.  I like using the vertical steam for quick touch-ups when I don't have time or the desire to lug out and set-up the ironing board.  I have been very pleased with the fact that it takes out the wrinkles just about as well as traditional ironing without having to buy a seperate steamer.  Of course, it has an auto shut off feature which is an absolute necessity in any iron. The iron states that it is anti-drip and so far I haven't had any problems with dripping.  My old iron dripped occasionally, so this is a welcome improvement.  I noticed that I am spilling less water when I fill the iron because they designed the reservoir opening well. I have not noticed any negatives so far with this iron.  This is one present I didn't want to exchange! Durability It had to replace my Rowenta iron about 6 months ago. It would turn itself off after being on for a few seconds. I felt like it should have lasted longer than it did even though it was nice while it lasted. It had superior vertical steam compared to the Shark iron that I replaced it with.

I iron a lot and for years had used a cheaper Sunbeam or Black n Decker, typically needing to replace them every 2 years or so. Until, I received a Rowenta as a gift. What a difference! No more replacing an iron every 2 years and it does a much better job, allowing me to complete my ironing time quicker and move on to other things. If ever I need to replace my Rowenta it will most certainly be wiith another Rowenta. Safety It has an automatic shut off in 10 minutes of none use. Ease of Cleaning I'm always sure to adjust the dial according to the type of material being ironed. There have been a few times I had it too hot for the type of material and could tell immediately it was not going to go well if I didn't turn the dial back a bit. Ease of Use Just like using any other iron with the exception of the type of water allowed for the steam function. Not a big deal though, just read the instructions and do what it says. Durability It's been working well for 14 years.

We have owned this Rowenta Steam Iron for several years. I really love this iron, I don't iron a great amount but I do use it quite a bit. We have had great experience with the Rowenta brand when it comes to irons and this iron is no exception. This iron has 36 steam holes on the bottom for effective steaming. It heats up quickly and has a dial for temperature control. The water hole to pour water in is big enough that water doesn't spill all over and the iron comes with a small water container with a spout to help with that as well. This iron also has an anti calc feature which helps prevent build up from water. It has a vertical spray button which is very helpful and effective. The heated surface is big enough to make quick work of eliminating those wrinkles and the tip narrows well to get into tough areas like around the armpit of a shirt! When set upright it is stable and won't easily tip which is great for safety reasons. This steam iron is not light, but it's got some heft to it without being too heavy. From my experience an iron that is too light isn't as effective. Overall I love this iron and for the price you can't beat it.

I had one of these for two years before the auto shut off malfunctioned, replaced it with the same model and it quit in two months. Called Rowenta and was told this model has a lot of problems. It is made in China whereas the more expensive models are made in Germany. I now have a Rowenta Focus and love it. It does not have an auto shut off.

I first used this product in my Grandmother's home, I usually trust her products because she is very picky on quality and perfomance. I was getting ready for a big interview that day and asked if she had an iron. I was directed to use this one in her wash room. It took a minute to figure out how to operate it and get the steam going but in less than a minute it seemed ready to use. It really heated up quickly. I am not sure if you can use a starch spray in combination with these types of irons so I just hoped it worked. I did a great job of making the creese in each pant leg and it gave a sharp look when I was finished. I have been using it every since. Unfortunately most of my clothes are cotton so I don't often need an iron but this one is great to have and I assume not very expensive because my grandmother is a frugal shopper. I am not sure how to fill the iron since it was full but I am not sure where I would even fill it. I also don't know if you need distilled water or if tap water is okay...

i am not really thrilled about this product. it is definately not the worst product but i dont think it is anything to rave about either. the iron works okay. it does what it was meant to do but does not really make the chore of ironing anything easier. i am not a big fan of the steamer part of it. i think any other iron out there can do the job for an even much more affordable price. the weight is good. it is not too tiring on the hand but overall, i dont think it irons as great as i would want it. there are some areas that required me having to go over it several times to get a crisp result. the water tank is of a good size and last a good amount of time to be able to do most of my clothes. it is also very easy to clean.

This is more of a high end iron, but we picked one of the medium models, and are extremely pleased.The iron has many functions for all sorts of material, and thus far it has not ruined any of our clothes. We have also been able to use it on delicate Indian clothes, which are usually very hard to iron properly. The steam on here gets rid of creases and wrinkles with ease, and glides very smoothly. It comes with a small cup to add water, which has a spout for easy pouring. The iron also has a good weight so you can really press clothes stiff. The warrenty on the iron is also decent, ours covered two years, but we never had to use it. Overall this is a great product, which we have been using for well over five years, without any problems. For the price this is a great buy !