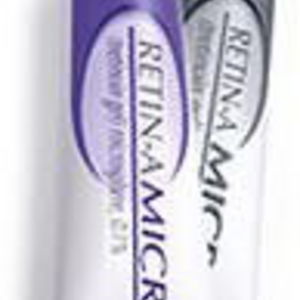 These are the most powerful agents that are used to get rid of the comedolytic. But this will take several months to be effective. This one is the less expensive out of the class of medications, but it is the most photosensitizing. This can also work for inflammatory lesions. This is something that you apply at bed time to eliminate the sensitivity to sunlight. Now the problem with this is that your skin gets a lot worse before it gets better. You would have to bare with the side effects until it slowly gets better. Side Effects Hard to tolerate the side effects because it makes your skin much more sensitive to sunlight. You apply this at bedtime to reduce this, but the problem is that your skin will start flaking out. You will flake tremendously after using it. You must pair this with a good exfoliator to get rid of the excess skin and you have to use a moisturizer, or else your skin will appear flakey to everyone.

I've been using Retin- A (Tretinoin) Micro Cream for about 2 months now and I have been very pleased with the results. It's a little drying but it helps improve my complexion. This has quickly become part of my night time routine. Effectiveness I had dark spots on my face and was tired of using other products and not getting results. Although it has taken some time (about 8 weeks), I have really noticed an improvement in my complexion. I feel a lot more confident in public and don't have to pile on makeup to cover up spots. Ease of Application A pea sized amount works miracles, believe me!!! Any more than that and you could run into problems. Make sure that the product gets rubbed in all the way. The texture is a little gritty, I guess because it is polishing, so don't be surprised. I've noticed that certain areas of my face end up being drier than others when I get up in the morning but I just put a little moisturizer on and keep going. Convenience This comes in a very portable tube. Just don't confuse it for toothpaste. Side Effects The biggest side effect is that it is drying. You also have to be careful not to use any products containing witch hazel. Witch Hazel + Retin A = Tingling + Burning!!! Immediacy You will not get overnight results with this. You have to be patient. It's worth it though.

My dermatologist prescribed me Retin A for my oily skin, Initially i used it morning and night and it caused extreme irritation to my face. My face peeled and burnt and I broke out even more than usual during the first couple of weeks. Eventually the side effects wore off and my acne cleared up. Even though it gets worse before it gets better, Retin A is definitely worth it.

I recently went to the dermatologist about some keratosis on my face from the sun. I asked while I was there about how to control adult acne and blocked pores . I have had trouble with my skin all through adulthood bit the " zit zappers" did little to prevent  breakouts or black heads. Further I have sensitive skin and found scrubs , buff puffs ,etc were only aggravation. She gave me samples of Retin-A gel and I have been using it for several weeks now.        I have found it a nice slow microdermabation. I have a lot of acne right now as it all comes to the surface but I can literally see the outer layer of my skin melting away. The pores are clearing out and the pimples are smaller and smaller. I didn't realize how much was there  really in some areas of my face. I am impressed with it's effectiveness and speed.        I will remain on the Retin-A . It is exactly what you need if you have problems with your skin not " refreshing" and shedding the outer layers. Side effects are a bit of soreness, some redness and a few weeks of looking a bit broken out.   Well worth the results. Doc says about 3 months to see a real reversal but it looks like sooner for me. Love it.

I absolutely L O V E this stuff! It has changed my skin texture, my skin elasticity. It makes my skin just glow, look healthy, suppl and young. I love it. It can be drying, but with a quality moisturizer it's awesome. Hands-down, it's better than any other anti-aging cream, or treatment.

I first started suffering from severe acne in middle school. It extremely bad, to the point where I would actually get headaches from the painful pimples all over my forehead and around my mouth. I tried pretty much every over-the-counter product the stores offered, but nothing worked. (I'm guessing that's because those products are for minor acne, and mine was DEFINITELY not minor). I used ProActive, which worked really well, but only for a while. Then it just quit. I have no idea why. I took all sorts of prescription pills trying to fight it, but nothing was producing any results! Finally, I went off to college, and one of my roommates told me about Retin-A Micro. She said that it pretty much makes your face explode (i.e. break out) at first, but that' the way it has to work. Also, it can dry the skin out a bit. However, if you can make it through that first month of even worse sking than you had before, the results are amazing. I was pretty much willing to try anything suggested to me at that point, because as far as I knew I had run out of options. So, over Christmas break I asked my doctor about it, and she perscribed it to me to give it a try. What my friend told me was true. After a few days of applying the gel after washing my face at night, I noticed my face breaking out worse than it ever had before. The doctor even told me this would happen, though. She said that's the way the medicine works. First it has to bring everything under the surface to the top so that it can start fresh in preventing more acne. So, yes, my skin took some pretty hard treatment for about a month, but then everything started clearing up. Amazingly. That was three years ago that I started using Retin-A. Ever since the end of that first month, or so, I have had incredibly clear skin. I mean, it's not perfect. I still get zits every now and then, but it is NOTHING like what I had to deal with before. I've never been so gung-ho about a product as I am with this one. It's just because it did such wonders for me, and I feel bad for anyone who is having to suffer from what I did, and I can help them, I so want to. So, I recommend giving this product a try. Well, only if you have severe acne because it can be a bit harsh on your skin. For me, though, the pros SO outweigh the cons. I hope this helps! (Photo from http://images.google.com/imgres?imgurl=http://www.canadadrugsuperstore.com/products/42015.jpg&imgrefurl=http://www.canadadrugsuperstore.com/more.asp%3FProductID%3D42015&usg=__xdYoQFTyC0Re5IOuY28ukofeVwc=&h=129&w=163&sz=5&hl=en&start=3&um=1&itbs=1&tbnid=tza5r9c9oNx4eM:&tbnh=78&tbnw=98&prev=/images%3Fq%3Dretin%2Ba%2Bmicro%26hl%3Den%26client%3Dfirefox-a%26rls%3Dorg.mozilla:en-US:official%26sa%3DN%26um%3D1)

When I first tried retin a it began to clear my acne within four weeks.  I used it for roughly one year.  After about six months of usage, the results began to decline, and the acne returned.  I tried over the counter acne brands for a while, such as perricone, ddf, acne-free, etc.  After a couple of years, I went to another dermatologist.  She prescribed retin-a.  I decoded to give it another try.  This time,  it only moderately cleared my acne after four to six weeks.  Then, not only did the acne begin to return, but it irritated my skin and caused hyperpigmentation.  I discontinued using retin a forever.  I am 41 years old, and have been battling moderate acne since I was twent-fouryears old.  I gave retin-a a three star review because it works for some people.  I had a collage roomate who suffered severe acne.  Once she started using retin a, her skin began to clear up after about four to five weeks.  She continued to use it for about one year and her results were great.  Her acne did not come back.  Retin A and other retinoid type products are supposed to work by gently exfoliating the top layers of the skin, so that the pores won't clog.  I found that the gels help to contol sebum as well.

I have had acne all my life, because it runs in my family. I have tried all the over the counter meds, which just dry the skin, but not controll the acne. My Dr. had me try Retin A, and I was amzed!! Not only does it get rid of acne, it smothes out wrinkles, and gives me glowing skin.. When you first use it, you break out very badly, but that is because it draws all the acne out of you. Your skin turns red, and pells, killing all the dead skin, and letting the impurities excape. It takes about a month to show inprovement, but it is worth it !!!

I suffered with acne for a very very long time, and I have tried so many different products, some good and some bad, to try to clear up this problem, and this product was not one of the good ones at all.  It made my skin super sensitive and I would get blisters all over if i would go in the wind, or cold, or sun, or anything!  I couldn't wait to have clear skin so i suffered through all of this because my doctor said it would not be for long.  Well, a year laster and my skin is still red and still broken out.  I looked worse than I did before and was even more embarrassed of my uneven skin tone.  As soon as I stopped using it, my skin cleared up and I was no longer red.  I would not use this product again and I would not reccomend it to anyone.  I have had over the counter meds that worked better and they were farrrrrr cheaper!  I don't think this was worth the money and I don't think it was worth the pain.

i have been troubled by acne since i was 12 and its been very hard to deal with. sometimes i don't want to meet new people because of the acne. i'm 42 years old i shouldn't be dealing with this problem. i'm very happy my children was spared the acne. i've tried all the over the counter products, but nothing really helped. so i started going to the dermatologist to get treatment and its really been helping. i was prescribed retin a to be used once a day at night. the only problem is, not to be in the sun too much, and wear sunscreen when you do go out. it takes about 6 weeks to start the healing process good. try not to use any other products while using retin a it could cause irritation. but if you do make sure you get the doctors okay. also do not use too much cream a little goes a long way, but after you had experience with it you'll know how much you will need. also clean your face twice a day don't scrub and wait 30 minutes before you apply retin a and don't be discouraged because it will take at least 6 weeks to see any results