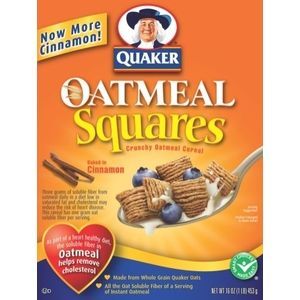 Anytime you see the Quaker on the box, you can be sure that the cereal will be wholesome, nutritious, filling and delicious. Quaker Cinnamon Oatmeal Squares is another delicious product in a long line of delicious products. As the name, indicates this crunchy cereal is in a square shape. The shape seems to keep them crunchy even after pouring milk on the cereal. The cinnamon adds a nice touch and really rounds out the oatmeal flavor and fiber. This is a very satisfying and filling cereal that my whole family enjoys.

**Intro**I shouldn't, but I do. I put a lot of stock in a name, especially with breakfast cereals. Some just don't sound appealing. The name Quaker Oatmeal Squares has no pizzazz, and doesn't make me want to pour myself a big bowl and add milk. This week, though, on sale, I was finally willing to give it a try. With this, I have to issue an apology to Mueslix. I don't care how much it's on sale, that will never, ever sound appealing enough to make me place it in my grocery cart.**The Taste**Each Quaker Oatmeal Square has a lot of taste packed into it. Additionally, it's very fulfilling, reminding me of shredded wheat. The texture of this is better, though, as is the taste. It has better taste than a plain shredded wheat, and a taste that isn't quite as sweet as a frosted mini-wheat. I tried it in the cinnamon flavor, and I do have to ask about the comment on the box that said it now had "more cinnamon." I found the cinnamon taste pleasant and adequate, but I have to question "more." It must have had barely any cinnamon before.**The Nutrition**Reading the nutrition label on the Quaker Oatmeal Square box, it's easy to see why this cereal seems to have such good flavor. There are 230 calories in each serving, nearly 100 more than other healthy cereals. There are also 13 grams of sugar, half as much more than other healthy cereals. Truth be told, it's more sugar than you'll find in a frosted mini wheat, and more than you'll find in Cap'n Crunch, but way less than Mueslix. Hmm, maybe I'll have to try that after all.**Conclusion**Like the old saying you can't judge a book by its cover, I guess you can't judge a cereal by its name either. However, just because the name is boring and includes the word "oatmeal," don't expect it to be the best nutritional thing out there. If you're thinking of buying Quaker Oatmeal Squares, you'll need to decide whether you want to sacrifice some calories and sugar to the good taste.

Quaker Cinnamon Oat Squares with non-fat plain yogurt and bluberries - this is one of my favorite breakfast cereal combinations.  The Oat Squares' sweetness is just right with the tart yogurt!  This cereal is also great as a ligh snack.  My problem is that I can't seem to find the Cinnamon variety anymore in my local grocery stores.

Quaker Oat Squares is one of the best cereals I have run across in a long time.  They are slightly sweet, stay crunchy in milk, can be eaten as a snack without milk, and best of all, they are also good for you.  Way to go Quaker folks. ! !