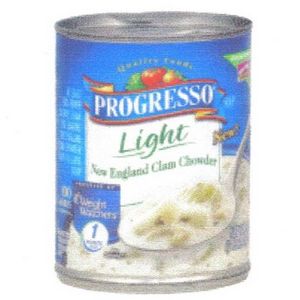 Along with the invention of the wheel and baiting hooks to catch fish, undoubtedly one of the best inventions human beings ever came up with was the concept of **soup** -- certain foods brought to a boil and simmered for hours, with the *impromptu* additions of whatever other ingredients came to hand.  At the end of the day, the soup was ready to be ladled out and served up as warm, comforting one-bowl meals.  It  was left to the hardy New England fishermen to come up with clam chowder.  No canned chowder can beat the freshly-made-from-scratch stuff but Progresso Rich & Hearty New England Clam Chowder came close -- a thick flavorful blend of bits of clam, chunks of potatoes which were tender but not mushy and no unnerving crunchy bits of shell.  Individual tastes may differ but personally I considered a bowl of this chowder to be a special treat.  Alas, it was also high in virtually everything that was bad for a person because chowder was originally designed to be the mainstay of  hardworking people who burned up calories like they were going out of style.  In short, I was delighted to find that ***Progresso Light New England Chowder ***is nearly as good. **WHAT THIS IS:** ***Progresso Light New England Chowder ***is basically just that -- a thinner, lighter version of the Rich & Hearty which contains clam broth, milk, water, and perhaps a little less of the other ingredients including clams potatoes, celery, and smaller amounts of lobster, shrimp, crab, tuna, cod, blue whiting, haddock, halibut, pollock, redfish, parsley and other spices and preservatives. **STATS:** Each one-cup single serving contains 100 calories with 20 calories from fat.  There are 2.5 grams Total Fat, half a gram Saturated Fat, zero Trans Fat, 1 gram Polyunsaturated Fat, half a gram Monounsaturated Fat, less than 5 mg. Cholesterol, 690 mg. Sodium, 20 grams Total Carbs, 4 grams Dietary Fiber, 2 grams Sugars, 3 grams Protein, and 4% Iron. **TASTE TIP:** The flavor of Progresso Light New England Chowder is enhanced by adding a dash of lemon juice and black pepper. **MY VIEWPOINT:** Just for the record, ***Progresso Light New England Clam Chowder ***shouldn't be confused with Manhattan Clam Chowder (which has the same ingredients but in a tomato broth).  Individual tastes may differ but I love ***Progresso Light New England Clam Chowder ***which is available in stores everywhere and also in 12-can packs from Amazon.com.