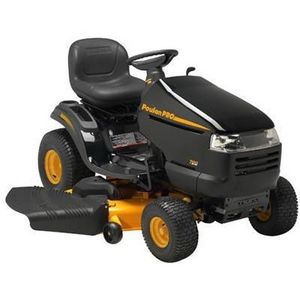 I am so sorry I bought this riding mower. I was duped to think the 2 year warranty was a good thing. Now, it does not work, and each repair place says it is a 6 week wait! Now it is summer and I am supposed to wait 6 wks? And, that does not count time to order parts! What a ripoff!

We purchased a Poulan Pro series 42" lawn tractor over eight years ago to keep a large two-acre lawn clear at the front of our weekend property in the country. Not knowing anything about lawn tractors (riding lawnmowers) at the time, we went with the Poulan brand because it was the most affordable machine we found with good name-brand recognition.   After getting the tractor out to the country it went straight to work and was used and abused as we cut down high grasses and weeds and ran over hidden obstacles such as old barbed wire, which snarled in its blades. The tractor somehow survived that initial clearing chore and continued to serve us very well under any and all conditions and our initial impressions of it were guarded yet very positive.  What we first liked about the mower were its electric start, its reliable cold-start capability, it's clutchless six-speed transmission, and its ability to cut over broken, uneven surfaces without digging in and scalping the ground. The deck is adjustable and can be manually raised as needed while still in operation.  In addition, the tractor was comfortable, easy to get onto and off of, and could be taken to a very low 1st gear for steep climbs or left in 3rd or even 4th to get the job done quickly. Its tires also handled the soft sugar-sand underneath the grass and provided good traction over less heavily-covered inclines and declines.  That same sugar-sand, which becomes easily airborne in the summer months, was quickly proving to be the cause of our pushmowers' early demises, the fine sand getting into the carburetors and engines and wreaking havoc. The Poulan's covered, filtered 17.5 horsepower engine seemed far better equipped to handle the sand and never developed operational or driveability issues.  We've used the Poulan Pro for several long cutting seasons now and it has yet to require anything other than normal maintenance. The conditions it works in are frequently harsh and the terrain it covers is still somewhat rugged and "full of surprises." So far, no broken or bent blade shafts even though it has hit some serious debris over the years. It still starts right up even after months of sitting and gets going without any stumbling or surging.  It does have a few minor quirks worth mentioning. When replacing the battery, which is under the seat, take care not to touch the wrench to both the cable post and the nearby seat coil or it will short and possibly burn or shock you. Also, on really old fuel (we're all guilty), if you start it and stop it a few times in quick succession, such as when pulling it into the shed, it will occasionally backfire. A backfire inside a small shed will get your attention. It doesn't seem to get exceptional fuel economy for a small motor but then these machines work hard and I've heard none of them really do.  There's one other, possibly more significant limitation, which mars the overall ownership experience somewhat: You can't drive it down the road and get your groceries. Unless you're George Jones, it won't see you in to town and back, which is a shame, because it rides and handles so well you'll find yourself wanting it to.

**I have owned this mower for 6 years it is still running ,after i had to have it rebuilt. had trouble out of it ever since i bought it.** **i invested 2200.00 in this mower in the initial buy and was told by dealer it was a bargain after spending another 1200.00 to maintain this mower overthe time i have owned it i will admit after i had it rebuilt it has worked better than when it was new.** **farmer**

Poulan lawnmowers are very good value and  have reliable products. We own both a riding lawnmower and a self propelled Poulan  mowers.  Their machines are mechanically sound and I will continue to buy their products

I am real satisfied with my Poulan 42" Riding lawn mower. I have mowed with it for about 3 years. It provides a nice even cut and with the 42" cut, it takes no time to mow my lawn. It starts with the greatest of ease and doesn't use as much gas I would have thought. I keep my oil changed regularly, which I know extends the life of the engine. I would recommend this brand of mower to everyone. am very satisfied. Ernest R. Casey

Bought a poulan XT 12.5 hp. 38" deck and if I get on a slight slope (sideways) it doesn't have the power to move at all, even in low gear with deck up and disengaged. The rear wheels appear to have too much side to side play on the axles.Maybe this is causing a mechanical bind and holding the mower back. There's no adjustment here as the wheel is held on by a C-clip instead of a nut. Pretty cheesy set up in my opinion. I'm not sure this is the cause, but this mower will not work for me as my yard is not perfectly level.I'm taking it back on Monday and would not recomend this mower to anybody!

i own the poulanpro 42 inch riding mower and i've had it now for about 6 years. remarkably it has lasted that long and at the time when i bought it it was the only one within my budget.it was very reasonably priced when the others were in the thousands it was just over a thousand. it has an 18.5 horsepower motor very well built. it has a great drivetrain so it pulls up hills pretty good and the tires are allterrian type so that helps the pulling process.it has electric start and a pull for backup and the headlights are halogen so if you need that extra few minutes at dark you'll have it. i wouldn't recommend running them to long because it will kill your battery. the generators on lawnmowers aren't as strong as the ones on our cars. one thing that i did with mine that you might want to try is i made a plate to go over the exit section of the mowdeck and when i cut my grass it was like i had a giant mulcher mower it drove the grass back into the ground and my grass came back thicker.