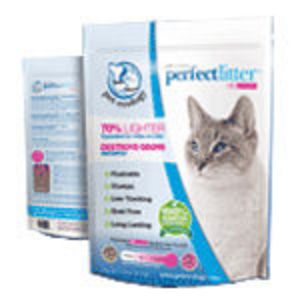 I was so fortunate to find Perfect Litter Alert product for my cat. You know the name says everything...PERFECT! I've tried other litters that are natural but, never have I found a product that is eco-friendly, clumping, great odor control and best of all it lets me know if my cat has a Urinary Tract Infection. I love my pet so I'm willing to provide only the best product for her. I highly recommend this product to anyone that has feline furry pets. You know the litter box can be a night mare if you don't have the Perfect Litter. I'll never change litter again.

I tried Perfect Litter by Pet Ecology because it says that it controls odor, has low tracking and is made for multiple cats.  I have a cat that is prone to urinary track infections and I liked that the litter would help me detect a UTI.  I have not seen any of these things come true and I have been extremely disappointed with this litter.  I have four cats and two cat boxes.  First of all, the litter has been tracked all over the house and the room stinks so bad we can't stand it.  I am hurrying to finish my trial offer of litter so I can go back to TidyCat litter that doesn't allow the house to stink!  I even called the customer service phone number to ask why this litter doesn't control odor like it says it will.  The lady simply said that the odor control is what most people like....did I get a defective bag of litter then?  Because this litter does NOT control odor, for sure, and I'm tired of this expensive litter being spread all over the house!!

It did not control odor, clumped poorly, and they continue to charge my credit card and mail me bimonthly bags despite emails cancelling the service months ago. The phone number is disconnected and I never get replies to the emails. Don't get this stuff.

This litter is by far better than any other I have tried. It is Eco-friendly, inexpensive,detects UTI's by changing litter color, lightweight, clumps the best, less tracking, dust-free & controls odor even with 6 cats in the house. You have to try Pet Ecology Perfect Litter.

I bought for the first time ever, cats from a breeder. I got 2 "Tonkinese", and they are the sweetest, most lovalble, people friendly cats I have ever owned. However, one came with a free prize, which we are trying to control now, a case of GIARDIA; which causes a most foul odor, and watery stools. I was desperate to find something to control, or lessen the odor. I happend upon Pet ecology's website, and found their litter. It has been a GODSEND; the statements it makes on it's website is absolutely true, and although, with my vets help, my MIYU's condition is in remission, hopefully cured, I will buy this cat litter till the end of time. Unless Pet ecology comes out with a new, improved version, which I dont see them needing to! Its home delivered, weighs lite as a feather (70% lighter than convential litter) and has the added feature of warning of a urinary  disease, FLUTD. If you haven't tried it before, believe me, once you do, you will never get anything else!!