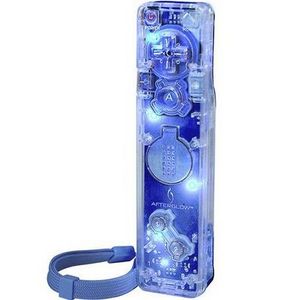 This is a great controller for the Wii I love how it glows and so do the kids. I have caught them trying to play the Wii in the dark just to see the colour of the remote made me laugh until I tried it and it does make the games more fun! It did come in handy when it got lost, we couldnt find it anywhere then I was walking downstairs int he dark and stepped on it, it glowed and I found it in a place I would never have thought to look for it! Had it not had that feature I would NEVER have found the darn thing! It performs as well as any of the other Wii remotes but it looks a lot better I was never all that thrilled with the traditional white or black remote controller and this one suited us perfectly I plan to buy another one very soon to replace our other black controller! A great buy you can not go wrong with this product! Would recommend it to anyone who wants something other then standard controllers or anyone with kids they will love the afterglow controller a lot more then the standardized one!

I'll admit, I was one of those people that wanted this because of the light up, cool look that made this remote so different from the other ones. It would have been probably fine but the remote had a habit of getting rather hot in comparison to my other wii remotes. It was to the point that on game night someone would sit out a few games while it cooled down enough to handle. Once the heating became a problem we ended up buying another wii remote to replace it during those periods. A few months into owning this and it would also randomly start vibrating during gameplay and wouldn't stop until we rebooted the wii, which we took as the last straw. I actually don't like vibrating controllers that have been part of the programmed game, and I like hysterically shaking controllers even less, particuarily when I'm trying to shoot zombies. We eventually returned to Gamestop for a different one.

The lights are awesome, you can turn them on and off if you want. Like the normal wii controllers it has vibration sensors. Great quality but the battery drains with 15-20 hour use. Worth getting especially if you have a light up sword or accessory!! I've seen purple, blue, green, and pink.

Okay I am going to go directly to the con's in this review first. I will cover the pro's later, but first there are a few con's that need to be discussed. The rumble motor has a tendency to get stuck ON for no reason and the only way to get it to stop rumbling seems to be to exit whatever game you're playing and return to the Wii menu. This is just a minor setback because it doesn't happen all the time, but it will happen. The next thing to be warned about is the sync issues this controller has. It doesn't like to stay synced to the console as well as the original Nintendo branded remote does. It has a tendency to drop connection from the console for a fraction of a second and reconnect. It reconnects fast and the connection is only lost for a matter of less than a second, but when every second counts it's definitely an inconvenience. Okay now onto the pro's, and there's a lot of them. This controller is built just as solid as the original Nintendo controller other than one thing, the B button. The B button has a loose feel and will rattle when the rumble motor is on if you don't have your finger on it to absorb the vibrations. Not a big deal to me so I didn't list it as a con, more of a pro for build quality I think over all. Another good aspect of this controller is the button layout. The movement of the + and - buttons is amazing, and makes some games that were hard to play before, very playable now. These 2 buttons having been moved is the best thing to happen to the Wii remote EVER. They aren't the only buttons that have been moved though. The 1 and 2 buttons as well as the Home button have been moved as well, and all for the better. When you hold the controller on it's side like a NES controller, the 1 and 2 buttons feel more natural being at a slight angle, it's a minor difference and you should adapt very quickly. Lastly, the Home button was moved from above the speaker to the right of the Power button. Now you shouldn't have to worry about your thumb resting near it and possibly bumping it now and then. Now onto the technical stuff, I have tested this remote quite a bit and it's good. The motion sensor is accurate, and the IR receiver works well too. I did notice one thing though, but it only seems to be noticeable on the Wii menu. It seems the Wii cursor only updates at about half the speed of the normal Wii remote. It's still smooth but my guess is some sort of battery conservation while on the Wii menu or something. Not a con really, just something I noticed. Finally the battery life, and it's good. Not quite as long as the original Wii remote, but it's not bad either. Take the battery life of your Original Wii remote, and subtract about an hour or so and that will be the battery life of the Afterglow remote. The LED's are bright, especially so in a dark room. The remote also has 3 modes, so if you don't want them on at all you can turn them entirely off. You can also set them to only light up while the motion controls are active. So there's an option for everyone, I personally leave them on all the time because I like to play in the dark. If you are looking for a well designed Wii remote, this is it. Normally I would suggest people stay away from the 3rd party console controllers and such, but this is good. If you feel the buttons should have been moved like this in the first place, pick one of these up. If you need a second remote for a friend or family member, pick one of these up. You may have a few issues with sync here and there, or the rumble motor may stick on now and then, but besides those issues these are solid remotes and a worthy competitor to the original.