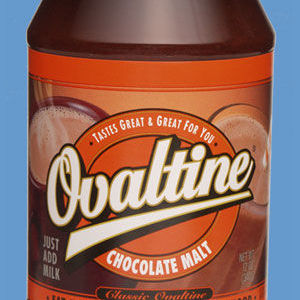 Ovaltine has such a rich and creamy chocolaty flavor, this malt extract drink powder is full of nutrition you won't find in some other chocolate drink mixes. You can drink this chocolate drink mix either hot or cold, I prefer to drink it hot it makes a great cup of hot cocoa.

If you love malted milkshakes, you'll ADORE the Ovaltine chocolate malt powder with whole milk and chocolate ice cream to make your very own! This powder helps bring the rich chocolate flavor to the thick, creamy ice cream and milk when they're all blended together, and it'll be just about the best-tasting shake you'll ever have. Ovaltine, the tried and true classic!

I know that this is meant to go in milk, but it is GREAT in coffee and that is the only way I use it! I put two teaspoons of it and one teaspoon of creamer with some sugar in my coffee. Hot chocolate coffee? Yes please! I bet it would be great on ice cream as well. I would recommend this product to others, whether they use it in milk or otherwise!

I love how Ovaltine isn't super sweet like other chocolate milk mixes on the market. There are multiple versions depending on where you purchase it from, but the one that is made for the American market is sweeter than the European or Asian markets. All Ovaltine products taste great to me though. If you're making it for your children though, if they're used to Nestle or Hershey's, you might need to add some sugar. My child loves the malty flavor though, and prefers this over other brands. Highly recommended.

I actually am one of the few people that never tried this product growing up, but my husband had it all the time.  My kids like milk already, but they LOVE chocolate milk so I thought I would try this product out.  First I like that it has the added vitamins and minerals, and the fact that the kids are getting the benefits of the milk itself.  The ovaltine smelled very chocolatey and yummy right when I opened it.  When I mixed it with the milk, it actually mixed very well.  We tried a different brand that didn't and ended up being a little gritty-yuck!  The taste of the Ovaltine was excellent!  Creamy and rich.  Everyone in the family gave it and approving thumbs up, especially my toddler.  They actually consider it a treat.  I like it because they are getting the additional nutrition put into their diet in a fun way.  Overall I would definitely recommend the product to others, especially to parents.

When I was a kid I lived in Villa Park, IL, which was at that time a company town.  At least half of the village residents worked for the Wander Company whose factory was located on Villa Avenue a few blocks south of St. Charles Road.  This was a booming industry which survived the Depression and World War II shortages in great style.  Every evening at 5:00 p.m., the factory whistle would blow, signaling to the people of Villa Park that the factory was closing for the day and the employees were on their way home for dinner.  Most people who worked there didn't get rich but managed to earn decent livings for themselves and their families and the product of their labors was ***Ovaltine Chocolate Malted Mix***. The original version of this beverage mix was dark rust brown, aromatic, granular and had no sugar in it.  Preparation involved mixing a few tablespoons of ***Ovaltine*** with the desired amount of sugar and perhaps a teensy pinch of salt, then dissolving all that in milk.  ***Ovaltine*** made with cold milk was a great kid-pleaser but the addition of hot milk to ***Ovaltine*** enhanced its delicious malt flavor and also imbued an almost magical soothing effect.  No matter what kind of day you had had, a nice hot cup of ***Ovaltine*** before bedtime just seemed to make you feel that everything would be alright.  It was too good to last.  **What Were They Thinking?** The Wander Company packed up their gear and moved to another state a few years ago.  That we could live with but we were unprepared for what came next.  We didn't hear about ***Ovaltine*** for a while and then the drums began to beat with an almost unthinkable message.  Somebody had tinkered with the ***Ovaltine*** formula and "improved" it.  The ***Ovaltine Chocolate Malt Mix*** of today is easier to prepare and enjoyable for people who have nothing else to compare it too but it tastes as different as night from day compared with the original version.  To me, the modern ***Ovaltine Chocolate Malt Mix*** tastes more like a strange sort of instant hot cocoa.  Instead of imparting a robust unmistakable richness, whatever malt is in this new stuff makes one wonder "What** IS** that?"  Of course, for a lot of people this is the only ***Ovaltine*** they have ever known and this beverage packs a lot of fans along with nutritional values that still deliver. **STATS:** Four tablespoons of ***Ovaltine Chocolate Malt Mix*** mixed with an 8-oz. cup of fat-free milk is a single serving which contains 170 calories with zero calories from fat, zero Cholesterol, 115 mg. Sodium, 18 grams Total Carbs, less than one gram Dietary Fiber, 15 grams Sugars and one gram Protein.  One thing that hasn't changed is the treasure house of vitamins and minerals:  80% (D.V.) Vitamin D, 70% Riboflavin (B2), 60% Thiamin (B1), 50% each Vitamins A, C, and B6, 45% Niacin, 40% Calcium, 30% Phosphorus and 15% Iron. **MY VIEWPOINT:** If you don't remember the original version of ***Ovaltine Chocolate Malt Mix*** and can embrace the newer version of this famous product without equivocation, then you are lucky because in its own way it is delicious and really delivers in the nutrition department.  I am taking off a star only because I remember what it used to taste like.  The memory of all that is still there and they can't take that away from me!

I LOVE Ovaltine!  I used it in a "Slim Fast" sort of way and it helped me to loose 10 pounds in a month after my first baby.  Now that I'm pregnant again, I drink it all the time when I get those chocolate cravings.  I also give it to my 1 1/2 year old son who can't get enough of it.  It's also great if he's feeling sick and I decide to give him a warm bottle.  He gets vitamins while having a soothing drink at the same time.  My husband would be drinking it too but it will really cause an argument if I catch him dipping into my jar.  lol  I panick if I'm running low on it and rush out to the store to make sure I have some for breakfast in the morning.

Oh when I was a kid we didn't get to have many sweets. Once a week we would get a half a bottle of soda (by Nana's we would get a whole bottle wooowhoo).  Well it took Mom a bit to calm us down teehee.  Growing up we always had **Ovaltine Classic chocolate malt flavor**  on hand to mix with our milk (Sneaky mom). We would have it hot and cold and even sometimes we could put it on our ice cream for that extra humph flavor.  Four table spoons in a 8 oz glass of milk, mix well and enjoy.  Saturday mornings was my Ovaletine and peanut butter toast day and enjoyed it all. I can see why my mom liked this product. It has Vitamin D, B vitamins, 4 carbs, protein, 80 calories (170 when milk is added), sugar 15 grams and what it doesn't have is saturated fat, trans fat, and cholesterol grams. Tastes great if I have it in skim milk or 2%, OK, even whole milk. This is one of my childhood comfort drinks and will always be around in this house for a very long time.  (good chocolate fix)