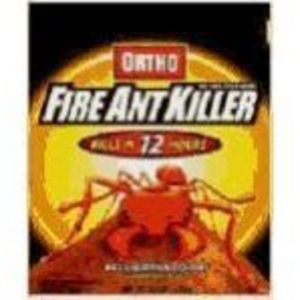 Now that I live in a subtropical climate, I have been forced to deal with new and unique challenges that didn't exist before. The warm weather and extended growing season are great, but there are some negatives to living in a warmer climate and chief among them are the many creatures that seem larger, stronger, and/or more aggressive than the ones I remember when I lived in the north. These pests are relentless and will stop at nothing in their quest to take over your home and alter your lifestyle. No, I'm not talking about Republican Party members. What I am referring to are the six- legged pests known as fire ants and one product that has proven very effective against these annoying little invaders is **Ortho Fire Ant Killer Mound Treatment**, a product that wipes out fire ant mounds, the queen, and all of her servants. **Ant Killer Commentary:** Ortho Fire Ant Killer Mound Treatment is a solid product comprised of small granules and I have been using it since I moved to my new home close to the Texas coast last year. The weather in this part of the country consists of two seasons, with warm weather (70 degrees or greater for the daytime high) about nine to ten months out of the year. With weather this warm, insects live and thrive like never before. They don't go underground for long periods of time, like the do in the northern states. They are right there, in the open; flying about, scavenging for food, building mounds, and doing the various things that insects like to do. Fire ants are small, but they sting and sting repeatedly- even if they are not threatened. They sting for no reason at all and they also have an annoying habit of building large mounds. They also multiply like crazy. A queen fire ant gives new meaning to the phrase "baby factory", for she is capable of laying up to 1,500 eggs daily! And once a mound has formed, the fire ants are ready to expand to all corners of a property. They are like an army surrounding an enemy. They will not relent and they will not surrender. It is you vs. the fire ants, and the small battles need to be won quickly before the situation escalates into all- out war. Fortunately, there are many products to control fire ants and Ortho Fire Ant Killer Mound Treatment is one of them. This is a dry, granular product that is applied by sprinkling over and around the fire ant mound and then watered-in to activate most effectively. Within twelve hours, the entire colony should be wiped out. If any ants remain, a second treatment may be necessary. About the only way any ants will survive a round of Ortho Fire Ant Killer Mound Treatment is if the mound is very large or wasn't treated properly. If used according to the manufacturer's instructions, the mound will be reduced to a lifeless patch of Earth with thousands of dead inhabitants. Ortho Fire Ant Killer Mound Treatment is pretty easy to use, but one must be careful when watering not to dump water too quickly. If you water too quickly or disturb the mound in any way before applying the granules, you can still go ahead with the treatment, but don't be surprised if you wake up the next morning and find a heap of dead ants around the mound. I had this experience the first time I used Ortho Fire Ant Killer Mound Treatment. I disturbed the mound from the force of the water being dumped too quickly and the ants started to scramble around in a mad, chaotic dash for safety. I finished the treatment, but the next day, there was a pile of brown stuff in front of the mound. Close examination revealed that this was a pile of dead ants. The Ortho Fire Ant Killer Mound Treatment killed them while they were in the act of scrambling and once the water completely soaked in, the dead ants were left behind, in an ugly heap. The killing was complete, yes. But the dead remains of ants, in open view, were an ugly site and an additional mess to clean up. **Bottom Line Viewpoint:** Fire Ants are a pain (literally!), but there are many products that can kill these annoying, stinging pests before they take over your property. Ortho Fire Ant Killer Mound Treatment is a very good product for fire ant control and it has proven highly effective at eliminating these annoying pests. The war is never completely won with fire ants because another colony will most certainly appear at another date and time. Thus, it is a good idea to keep Ortho Fire Ant Killer Mound Treatment handy to stop fire ants before they become a serious problem, winning the battle one mound at a time. The entire colony and its queen are wiped out within twelve hours, adding another tally in the victory column for the humans in this never- ending war.