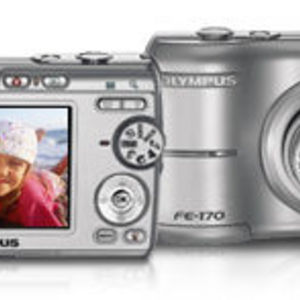 I have owned two Olympus digital cameras over the years.  The FE-170 is small and inexpensive.  It is easy to use and delivers very good pictures.  It is a rugged camera and survived a car wreck with me.  It takes great close-up pictures, and the digital zoom is excellent.

You have to hold the button down for several seconds before it takes a picture and it does use battery power quickly, but this is a pretty good little camera. Simple to use and takes wonderful, clear pictures. Lots of settings for inside, outdoors, sports, even for auctions and behind glass. Uses 2 AA batteries (Olympus recommends rechargeable). Batteries die quickly if you leave them in the camera when you are not using it. I always take my batteries out when I'm done taking pictures.

We purchased our Olympus FE-170 camera for about 3 years - as an additional camera to our Kodak EasyShare CS7330.  The description of the Olympus made us believe it would provide better photos than the Kodak..  We were wrong.. I am not an expert photographer, but have 6 grandkids in lots of events that I try to catch pics of all the time - so I've had lots of practice..  Either this camera does not put out many quality photos or I haven't hit upon the right combination of the many settings it supposedly offers.. Problems usually occur with inside pictures...  Gymnasiums, Church Events, Theatres, Etc...  Even when I'm careful to ensure that there is adequate lighting..  And/or also when you try to zoom in to get a closer shot of your subject.  The shots are too grainy, discolored and/or way out of focus. It is not just the user..  because my boyfriend, son and others have gotten some of the same effects on pics they've taken with this same camera.  They also have tried every configuration of the available settings that they can think of.. There is also a lag in the time that you push the button to take the photo - and the time it actually takes the shot..  Even when you hold it down to get the little green light on the inside screen..  You usually don't get the shot that you wanted.. So...  we have quite frequently gone back to using our old Kodak Easyshare camera.  It also takes much better movies than the Olympus..

The olympus fe 170 is a great camera for outdoors, indoors you can take pictures too but due to the limited iso flash is needed to light the scene and offcourse the range is limited. For those that hate video it is good to know that you do not record sounds with this camera and resolution is limited to 320*240 and with a 256 mb xd card you can shoot 13 minutes of video . This camera gives a good picture , it may not be lightning fast but most compact suffer from shutterlag. i like that is is pretty bulky it helps me to get / hold it steady , you can mount it on a tripod and it has a great digital image stableliser . the camera is powered by penlights and those are availeable on almost every corner of the world. it is advised to use it with NIMH accu's of 2100 nimh or higher on normal penlights it is empty early . thanks to the auto mode it can be used by any body , the scene modes are real nice and good and the macro is awesome shoot at 5cm distance. the images i take are in bright light and they are good for compact camera's when you look closely you can see difference with other brands , the colours are best described as brihgt and vivid , the white balance is not changeable nor has this model manual iso or aperture , but is cheap and most cheap camera's are not having full manual controls.

I have owned the Olympus FE-170 for about 3 years now, and I love this camera. It takes very clear photos with very little effort on the photographer's part. The Olympus FE-170 has multiple settings available for taking pictures in auditoriums, taking up close photos, minimizing red-eye, action shots, etc. You can even shoot very short videos with this camera! The camera offers 6 megapixels, which is more than enough for the everyday person taking pics of family events, etc. It has a compact style, but a very large screen for taking pics and photo viewing. The menus are easy to navigate and understand. My grandmother could use this camera without confusion. My only negative statement about this camera would be that it zaps batteries very quickly. If you purchase this camera, make sure you purchase a battery recharger and a good quality set of rechargeable batteries..you will need them. The cost of this product at the time I bought it was middle of the road compared to similar styles in other brands.

The Olympus FE-179 is a great camera with many picture options, perhaps to many.  There are some downsides:1.  The LCD is worthless in sun light.  Using the view find in combination with the zoom will leave you taking a picture of something different than what you see.2. The battery is a not a standard battery and you will need an Olympus charger to charge it.  Unless you have a spare battery your picture taking will end when the battery dies.3.  Before you use this camera I suggest you go through the menu several times.  There are many many choices and getting the most from this camera require a good understanding of all of the options.

I bought this camera for my husband and he loves it.  He doesn't take many photos and when he did he used a one time use camera and rarely got it developed.  I got tired of having all of these sitting around getting lost or taking a bunch of pictures we didn't really need just to finish the roll.  It is so nice to be able to have something small to carry with him, plus we can download them immediately onto the computer, or take to a kiosk and have them printed without waiting to finish a roll of film.  He was also able to learn how to use it very quickly and it takes nice pictures.  No viewfinded is kind of a bummer, but for him, it really doesn't matter much.  Some people don't like the XD card because it is more expensive, but I bought him 2 smaller cards on sale and it wasn't too bad to start with.  (I also have an Olympus Camera that uses an XD card so we can interchange them if necessary).  I also like the idea of AA batteries.  You are not tied down to having to remember to charge the camera.  He would never remember so ...  You also can buy them anywhere so you are never without power to your camera.  In short, if you are a camera buff, or like to play with the camera, this camera may be to simple and limiting to you, but if you want a simple,easy to use camera this is it.