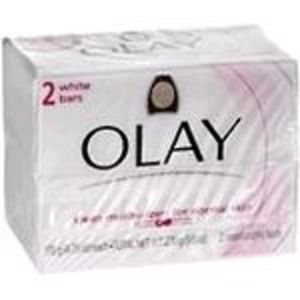 I used to buy Olay bar soap, always. But when the new shape of the soap was put on the market, I stopped completely, as it is too hard to manipulate.

It really is no wonder that Olay rates so highly on consumer review websites. They are the specialists in facial moisturizers, anti-aging products and lotions which defy logic! There are times when I doubt the believability of their claims, however this is one occasion I am 100% sold! I'm not quite sure how to refer to this masterpiece. Is it a moisturizing bar, a cleansing soap or an anti-aging spa treatment? In truth, I think it is a bit of all three, however it is a little piece of luxury we can all afford. It is the creamiest soap I have ever known. It does lather, but it lathers in a creamy rather than airy/bubbly way and quite honestly, when I've lathered it on, I don't want to wash it off at all. It smells heavenly. My son is able to use this facial soap which is comforting because he suffers from dry skin and eczema and I think this product helps sooth his irritation. I know my husband uses it because I notice it has moved from the basin to the shower! I suspect he's a closet fan!

I recently purchased the entire set of Olay products which contained the Olay facial soap as well. The soap of Olay has a unique shape and the fragrance is amazing. The soap is soft on the skin and it forms lather instantly. It works like a moisturizer and a facial cleanser for the skin thus cleaning the pores and giving the skin a regenerated look. If you have acne problems, it is good to use Olay facial soap as it can cure acne problems and a unique glow. The product lasted me for over a month. After washing your face with this Olay facial soap, there is no need to apply makeup as the skin looks fresh and you get a facial look instantly. This product suits all skin types whether dry or oily skin. The ingredients of this product include jojoba butter and crushed orchid extract which moisturize the skin and nourish it as well. The cost of this facial soap is very reasonable and is worth it.

By nature I am almost an exclusive Dove Beauty Bar soap user, however, when my beloved Dove Beauty Bar soap is not on sale I do purchase this Olay Facial Soap. I have combination skin that is also very sensitive. This means that I need a delicate soap that will not irritate my skin but at the same time is strong enough to clean my pores from all of the days dirt and grime that builds up. Olay Facial Soap works well with my skin. Most importantly, it does not irritate my skin and leaves my face feeling refreshed and clean. This soap is very gentle on my skin and because I am able to get a thick, creamy lather, I do not have to scrub too hard to get the desired results. Another plus is that this works well in conjunction with my combination skin. It neither dries out my skin or leaves it too oily, but able to find that happy medium. The scent of this soap is also rather pleasing to me. It is not too strong and bold, which is great for me, as I prefer my soaps to be on the softer and gentle side. For me personally. Olay Facial Soap is a great backup soap that I like to keep on hand and would certainly recommend this for those with delicate, combination skin.

This is the best soap that is out there. I have used others but nothing left my skin feeling like what Olay does. My skin feels so soft and clean. I have had allergies with other soaps on the market but not with Olay. My Mom always used this as I was growing up and so it has stuck with me. I trust the Olay brand and own other products from them, one including their body wash. Everything by them is great. The Olay soap has a nice scent and helps take my make-up off easily. I'm not sure I'd ever change from using this soap to a different brand, I really doubt it. I think I'm always going to stick with this one. I even take it when I travel so I won't have to use hotel soaps, because I know Olay is the best out there to make my skin feel clean and soft. I've read other reviews that said for people with sensitive skin to not use this- but I disagree. I have sensitive and it helps me a lot and doesn't break me out or give me any trouble.

Oil of Olay Facial soap leaves my skin feeling soft. I would not use any other soap after using Oil of Olay Facial Soap.  Oil of Olay Facial soap also has a great scent that makes taking a shower a real pleasant experience. I like to open the box, and leave the box in my drawers to allow the aroma of the soap to act as an air freshener. I can smell the pleasant scent for a long time coming from the opened box of soap every time I open my drawers.  I read somewhere that it helps to keep the box of soap opened, as it makes the bar harder. I don't know about that, but I  enjoy the pleasant scent.  I also put the opened box in my suitcase, and garment bag if I am going to travel.  It makes my clothes smell fresh and clean.      I would recommend Oil of Olay Facial soap to anyone that wants to feel refreshed after showering, and also wants to use the wonderful scent to make their bathroom and their  clothes smell fresh and clean.

Oil of Olay Facial Soap is pretty amazing. I find that it works quite well. I think over the years "Oil of Olay Facial Soap" has gotten better and better. Even though I really like this stuff, it's not perfect yet. Then again, nothing is ever perfect. I like the way that this soap lathers and makes my skin feel "soft and smooth". What's neat about this soap is that you can make it lather a lot or a little, whichever you prefer. I myself like lots of lather. The smell of this soap is absolutely delightful. The smell is "sweet, crisp, fresh and clean" smelling; at least that's the way it smells to me. I can get lost in its lather and the smell of it, which makes this facial soap all the more awesome. I like the size of this soap as well. It's not too large and it isn't too small, so it's easy to hold in the shower or while you are washing your face. The design and the packaging are cute to me too. This soap can be expensive, unless you can find it on sale or if you have a coupon. I also find that after I use this soap several times, my face looks a little younger. A little younger looking face is better than looking older. I'd have to give this product an "8" on a scale of "1-10" if I were rating it on a scale of "1-10". It's a good product and I think you should try it.

I enjoy using Oil of Olay moisturizing facial soap every night before I go to bed. I use it to take my makeup off, and also occasionally use it in the shower as my body soap. It is the nicest- smelling soap I have ever used - sometimes, after a shower, I'll just smell my arms for a little while to enjoy the scent.. weird, I know, but it smells so good! One thing about it, though, is that it makes my face shiny after I use it. That's okay for me, because I go to bed like that. But if you were to go out in public you'd probably want to put on some powder or something to reduce the shine. Other than the shine, though (which could actually be good, because it shows that it cleans very well), everything else about the soap is impressive. It's a good moisturizer, it's relatively inexpensive (although even if you have a more frugal taste, it's still worth it for the quality), and it just smells so darn nice!

I moved to Florida from Birmingham England and was not able to buy my usual facial and bath soap so I had to find myself something new.  After trying numerous brands I gave Oil of Olay a try 5 years ago and have not changed since.  The only thing I have changed is which one I use .....the original, sensitive, anti ageing or extra dry skin.  All of them I recommend you try.  A great body and facial soap.  I like my skin to feel clean and fresh after washing but a lo of soaps left it feeling extremely dry but Oil of Olay gives me the feel I want.  Winter time I have always suffered with dry skin but no longer after finding this soap.  Price is no different to any other everyday soap and there is no need to pay high prices for those luxury soaps....this does the job.  I suggested my husband use it for his dry skin but was reluctant at first thinking it was a female soap!  He finally gave in and been using it for a few years and his skin is definitely much softer and not dry and flakey.  Recommend everyone try it and you will notice the difference after a few uses.

I would love to try new products and write reviews on them.I spend alot of time outside. I love to garden. I grow vegatables and flowers. I also love to swim. I have my own pool. I also have a Tanning bed.