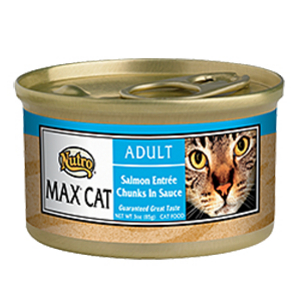 I picked up a case of *Nutro Natural Choice Salmon & Shrimp Chowder* last week at the local PetSmart.  We have 10 cats here at the moment: 3 are mine and 7 are fosters waiting for new homes.  Almost all of them enjoy canned food so I give it to them several times each week.  I had never seen this particular Nutro formula before so I wanted to check it out. This *Salmon & Shrimp Chowder* food contains salmon broth, salmon, chicken, chicken giblets, beef liver, dried egg product, ground rice, shrimp, rice gluten, peas, peppers, sunflower oil, potatoes, guar gum, brewers dried yeast, salt, and a bunch of vitamin/mineral supplements.  I like Nutro products because they don't contain by-products, mystery meats, etc.  When I first opened up a can of this food, I smelled it... because I am nutty like that.  To me, this food smells just like your basic chicken canned cat food.  That makes sense because it contains lots of chicken...  In fact, I think calling this product a *Salmon & Shrimp Chowder* is incredibly misleading. I've been putting this canned cat food out for our feline crew every other day.  Although they all rush up to me when they hear me pulling off the EZ-open cans, they don't get that excited when I put a bowl of *Nutro Natural Choice Salmon & Shrimp Chowder* down on the floor for them.  Some of them will eat it for a few minutes, but most of them just walk away and ignore the bowl until the foster dog eats it all. Although I am a big fan of the Nutro Natural Choice line for cats in general, I am not impressed by their *Salmon & Shrimp Chowder Canned Cat Food*.  The name is deceptive and the cats weren't all that impressed with this product.  I probably won't buy this canned food again.