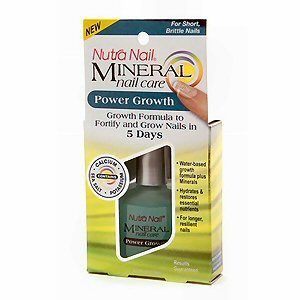 Generally speaking, I've had long fingernails as long as I can remember.  However, from time to time, my nails do suffer from brittleness and/or weakness.  During periods when I'm feeling ill, I can see the difference in the quality of my nails.  At that point, I cut off all of the tips quite short so that I can begin at point "A" with all ten nails.  To help matters along, I usually turn to Nutra Nail to help restore resilience to my fingertips. Nutra Nail makes several nail treatment products that all promise "longer, stronger nails" in "5 to 7 days."  This time, I selected **Nutra Nail Mineral Collection, Power Growth** formula.  Besides being on sale, this product promised to "fortify and grow nails in 5 days."  It's fortified with a blend of calcium, aloe, sea salt, potassium, collagen, and green tea in a non-oily base. The bottle of Power Growth looks like any other bottle of nail treatment.  The liquid is transluscent, thin, and easy to apply.  Because this is designed to be absorbed* into* your nails rather than coated on top of your nails, it doesn't leave a sticky residue behind. I use the Power Growth twice a day as directed--brushing it on and then massaging it into my nails and cuticles.  It dries quickly and leaves no color behind.  And yes, after 5 days of the treatment my nails and cuticles aren't ragged and brittle anymore.  They're growing (which they would have done anyway), but the main thing is that they feel stronger and healthier. Having tried Nutra Nail's other formulas, I was expecting that the **Mineral Collection Power Growth** would offer something radically different.  It doesn't.  I can't really see any distinguishing difference between this product and others that Nutra Nail sells.  Still, this nail treatment stands on its own merits, and I'll continue to use it as needed.