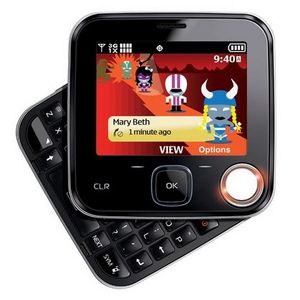 Nokia, the N93 is a true revolution. Indeed, it attacks a function hitherto neglected by all mobile phone manufacturers : the video. Where the best terminals have a video resolution of 0.1 Megapixel , 0.3 Megapixel displays the N93 . Also, movies are recorded at 30 frames per second . What make videos of quality approaching that of some entry-level camcorders. design side, the N93 also plays the camera board with a swivel screen. The unit thus stands as a real camcorder. Closely linked to the video, the picture is not left since the sensor has a resolution of 3.2 megapixels with autofocus. And for connections , Nokia sold out : Edge, 3G and WiFi. True precursor , the N93 can it really replace your camera and normal camera?

Before I got this phone, I read through A LOT of reveiws on Verizon's website. There were a fair amount that were 5 stars, but most were 3 or below. Because I thought the phone looked cool and that most reviews were decent, I decided to try it. Here's my story: exactly one week after getting it, it broke at the swivel point. The guy at Verizon said they couldn't do anything for me, so I went another two weeks with a twisty tie going through it. I decided to try Verizon again since I was quite irritated that my brand new phone was so bad after a week. This time the manager decided to give me a new one (after a lot of complaining and a 30 mintue wait). This time, the phone has worked fine. However, the battery life declinded severly after a few months (it only lasts about six hours before dying). I got a replacement battery and same thing happened. Plus! It's so stupid that when the battery is low, the phone beeps at me once a minute (literally, once a minute) and the screen lights up telling me that the battery is low. It would seem that a phone shouldn't continue to use it's power up if the battery is already low! That and a lot of other stupid features on the phone make me HAAATE this phone, and I would highly advise you to take heed to my review and all the other negaitve reviews out there and don't get this phone!

The Nokia Twist is certainly an interesting phone.  It has an interetsing design  where you have to twist it to open it.  Hence, the name "Twist".  Really it's like a slide-type phone, but with a twist (see what I did there?).  The screen part of the phone turns to the side to reveal a full QWERTY keyboard underneath.  So, this phone is wonderufl for texting.  The buttons are big enough and it makes text messaging simple and easy.  The reception overall has been good.  The camera on the phone is not great though.  Overall, I would say that this phone is more geared towards females (plus the back of the twist side can be used as a mirror to check your makeup ladies).  If you are in the market for a smart phone, then this is not the phone for you.  But if you are looking for a simply phone that texts and makes calls, then this phone is perfect!  It is also pretty small, which is a huge plus!

I have a Nokia Twist.  I didn't pick this phone on  purpose, but it was a consilation prize after I went through four crappy phones.  So on the fourth return, the guy helping me said that I could trade the crappy one for the Nokia Twist.  I like the phone because of the size and shape.  It is just a little square and it fits nicely into a little pocket in my purse (so I don't loose it). It twist up which is unique.  It also has the capability to assign avatar to friend, but I didn't like that option so I chose to turn the "habitat" off. The problem with the phone are it's size.  It is easy to loose and drop.  When you drop the phone the back pops off that the battery will fly out.  I have also had troubles with the phone locking up.  If I were to try to send a picture right after taking the picture the phone would lock up and I would have to take the battery out to turn it off.  The power button would not turn the phone off.  But after repowering the phone i would be able to send the picture message just fine.  Overall, I love the phone.  I have gotten so many compliments and also it has been a great conversation starter.

I recently switched carriers over to Verizon wireless, where this Nokia Twist was free with activation. It claimed to have a brilliant 3.0 megapixel camera with flash, of course among many other features. I'll start by saying that the phone itself is quite unique, and i love the design: before opening it, it's a simple square, with a hole that almost looks like you can hook it on your keychain, with touch screen front (with the exception of the "OK" button), and when opened, still keeps the uniqu design with a qwerty keyboard and shortcut buttons along the top. When I look at cell phones, the first feature I look for is a phone with a decent camera and a flash, because I am **constantly** flicking pics every chance I get. A camera with 3 megapixels with a flash sounded like it would be a good upgrade from my old phone which had 2 megapixels and no flash. I started out taking pictures to test it out without the flash, and it did alright. Even on high resolution picture mode, it looked a little fuzzy. I then proceeded to turn the flash on, and when I did, I was terribly disappointed. The flash not only made the pictures appearmore fuzzy looking, but it made the picture look like it had a snow film on it. I truely was disgusted. I would recommend this phone for the savvy phone user who doesn't take pictures very often, but if you're a picture freak like me, I would strongly NOT suggest this phone!

I got this phone a few months ago and I am over-all happy with it. Before, I had a LG Voyager. I hated it with a passion. When i first got the Nokia Twist, I loved it but then things started going wrong. I've had it replaced twice. First, the keys just stopped working. Second, the display wouldnt turn on. So, in other words, I like it but as soon as i can replace it, i will.

The Nokia twist is a sweet looking phone! It's small when not open then you twist it open and you have a full size keyboard which i LOVE! I love to text and hated have to use my old phone when the letters are on the number pads. That was a big pain to use. Now i twist and type away! Cause of it's shape and style you'll be getting lots of comments on it!! On the face of the phone it has two places on it that are touch and a middle button that is just a regular button. I like the touch buttons alot  and they do turn off when you are talking on the phone so your cheek cant push on them. I've had a few people tell me that after they would twist their phone's open over a while the phone got loose and broke off. I haven't had that problem so far but i can see if you are texting alot and you keep twisting it open and shut where it could do that. The camera on the phone works pretty well. The only con i've had is If there is not alot of light you will get a pretty dark picture. Other then that it has been the perfect phone for my 21 year old self!!

I just bought the Nokia Twist from a Verizon store. I love cutesy things so this is perfect for me. I love how it's easy to manipulate and it looks like a mini flat TV. I have never had a phone like this. The camera quality is decent. I can personalize avatars to look like my friends and family. The battery quality is great (lasting me about 4 days with a bunch of texting, calls, taking pics, etc.) Personally, this is a bit kiddish, but I still love it. However, I have to say the touch pad is a bit sensitive and you have to have some what small fingers to type. This is also a finger print magnet. You should have some wipes handy. And also one bad thing is that you have to slide the phone open to pick up calls. I prefer to have a phone that you can press a button to pick up. This phone also has a nice design with a circle on the right that lights up. Totally cute.