Other Misc. Healths:
Brand:
No needle, No Scalpel Vasectomy 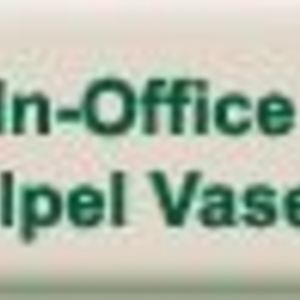 I'm writing this on behalf of my husband. He didn't want to create his own account just for one thing, but he wanted people to know of this option. I hope I'm allowed to do this... To save money on traditional methods of birth-control (which we have been paying for for 14 years) and for peace-of-mind, we consulted with our family doctor and decided that one of us was going to be surgically sterilized. This had come up in conversation before, years ago and Mr. Pitcherday had some reservations about getting a vasectomy done. No one wants surgery and apparently when he thought of vasectomy, he held it akin to being neutered, like the family dog. That's obviously not true. It's not castration, but it *is *needles and razor-sharp blades and cutting in the "man parts." I had just assumed it would be me with the IV's and scalpels, but a week and a half later he showed me a video on the internet for a procedure known as a "no needle, no scalpel vasectomy," which he said he would be OK with getting done. * As an aside, most health insurance will pay for surgical sterilization, male or female, because it means they don't have to cover years of birth control or pay for another human for 18 yrs.* Now it's done and he says he had no problem with it and felt no pain, just some pressure and tugging. The procedure only took a few hours and he had it done on a Friday so he could rest for the weekend and go back to work on Monday. The local anesthetic was delivered to the area via a high-pressure air blast that pushed the medicine through the skin of the scrotum with no need for a needle. He said it felt like a pinch. A ***real ***pinch, not the usual one the doctor says and you feel like you have been stabbed with a hot dagger. Both sides of the vas defrens are dissected and cauterized through the same 3mm incision. They replace the tissue that normally covers the vas over it and tie it with a dissolveable stitch, so there is, in effect a covering over the vas creating an extra layer of protection to prevent it from re-attaching itself naturally (apparently this can happen with a traditional vasectomy and is the reason for any error rate. Even though it could still happen with this procedure, it is extremely unlikely). There are no needles for the anesthetic, and one tiny incision which requires only a band-aid, no stitches necessary. Of course, you would need to take it easy for a few days, and no heavy lifting for the week. He said he only felt some throbbing the first day and it was taken care of by regular strength ibuprofen. He took antibiotics for a few days just as a preventive measure against infection (the doctor provided this at the clinic). I could never even see where the incision was made, it was so tiny. Not all doctors do this procedure. We went to Dr. Lee Fagre in Waverly, Iowa which is about 3 1/2 hours away from us. Obviously, the distance was not a big issue because of the advantages of getting the procedure done that way. We found him on the internet. Mr. Pitcherday says, no, he does not feel like less of a man and the anticipation was a lot worse than the actual procedure itself. Usually, you will go for a consultation appointment first and get the complete details along with charts and pictures then schedule the actual procedure. The doctor will warn you that although some men have had success with vasectomy reversals, the procedure should be considered permanent. Some men will have their sperm frozen in case they change their mind later on, but Mr. Pitcherday says if you think you are going to change your mind, don't do it. Mr. P says not to be afraid. He feels free and easy with the new knowledge that there is no longer a fail-rate with this kind of birth control. He doesn't have a worry in the back of his head all the time that maybe when the fun is over, we could have a huge, life-long responsibility on our hands that we are not up for. OK, he used the term "uninhibiting." But I already feel weird writing a review of a male procedure, so it will end there. Girls write reviews of birth control and people write reviews of other surgeries, so I guess this one should be OK. I don't think I'll be including a picture to be used across the site though. Mr. P says it might cut down on the whole* tubal ligation is major surgery* vs.* I don't want someone cutting down there* debate. He hopes his experience helps other men. Boy this review feels weird.