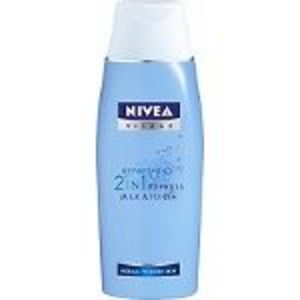 Nivea is such an understated brand. I think they should advertise more and bring more attention to their products. Nivea Express Hydration is great for daily use. It's lightweight and isn't greasy. I like to use it throughout the day to keep my hands and arms moisturized during the winter months. When I use it for the first time I was a bit skeptical because of how lightweight it is. I didn't think this lotion with such a lightweight consistency could do a great job at moisturizing my skin. I was so wrong. This lotion is amazing and I like the lightweight feel and scent. The scent doesn't interfere with my perfume so It's great to use at anytime of the day. Scent The scent is light and fresh. I like to use this lotion during the day when I'm planning to wear perfume because it seems to add to the scent of my perfume and isn't overpowering. Absorption This lotion is so lightweight and just seems to melt right onto my skin. It absorbs very quickly and leaves my skin feeling soft.

I have to admit, I always used to think that Nivea was just overpriced lotion, even without trying it (crazy, I know). One day, I caught a really good sale and had coupons, so I figured I would give it a shot. This stuff is amazing! I was so wrong. There definitely is a difference between this lotion and the cheap stuff. In the winter, I have super dry skin, like most people. I used to compensate by using whatever I had on hand and adding an oil to it, such as coconut oil, to make it more effective. I do not have to add anything to this lotion! It absorbs in my skin immediately and makes it so soft. It also has a pleasant scent, not like the other strong lotions that smell medicated or like plastic. My husband never really cared about which lotion I bought. However, after using this, he said that we definitely have to get more. This is well worth the money, on sale or not. You will not be disappointed!

I originally got this product as a free mail in rebate from a local store and was excited to use it since my skin was extremely dry and cracked. The timing could not have been better when I needed it as the cold weather was making my skin worse. Since my initial bottle I continue to use this product during the winter. It does an excellent job in hydrating my skin, however it is a pain during the application process. I have tried other lotions, but this has provided me the best results. It does take a very long time to absorb into my skin and takes multiple applications daily, however my skin condition is very severe. Scent This product has an awesome scent. Since my initial purchase I have purchased other Nivea lotions that I use in between my applications of this hydrating lotion. Absorption This product does work really well, except it takes a long time to absorb into my skin. I use this product in the morning and night when I have the proper time to make it effective. Effectiveness The hydrating impact is amazing and would recommend this product if you have very severe dry skin.

Nivea makes great lotion and this express hydration lotion is no exception. This is a great lotion for people with dry skin. It is also a great lotion for anyone during the winter months that battles with dry skin. I have oily skin on my face, chest, back, and shoulders. However, the rest of me gets incredibly dry during winter months. My hands, feet, and legs are the worst. This lotion does a great job at helping those parts of my body stay hydrated. I apply this lotion one to two times a day to see a difference. It is most effective on my hands and legs. I saw results within a few days. I would highly recommend this lotion to anyone looking to help fight off dry skin. It works! Scent The scent is not bad at all. It does not stand out like other lotions but it has a good scent to it. Absorption The lotion absorbs really quickly and nicely. It never leaves me feeling greasy or oily. Effectiveness It is really effective on dry skin on my hands and legs. You have to be consistent with it to see results though.

Nivea Express Hydration does a great job of keeping my skin moisturized while also preventing my skin from getting too dry during the winter months. The lotions goes onto my skin really well. It soaks in pretty quickly, and it doesn't make my skin oily at all like some lotions tend to do. I tend to have sensitive skin, and this lotion does not cause me any problems. It doesn't make my skin sensitive or cause rashes. It is gentle enough for daily use, and I normally put this on before I go to bed. Scent I like that this does not have a strong scent at all. This is a plus because I can continue to wear my normal perfume without having to worry about the scents competing. Absorption This absorbs really well into my skin. It doesn't make it oily at all. Effectiveness This works well to keep my skin from getting too dry. I also use it as a preventative lotion. Before I even notice dry skin, I star using this and I don't get dry skin during the winter months.

I have mildly sensitive skin and use moisturizers regularly. Nivea is one of my favorite brand for moisturizers. I have used Nivea Express Hydration and was quite happy with it. I like other Nivea moisturizers slightly better than this one. The Express Hydration is quite light, rather very light and I kind of miss that creamy Nivea lotion texture and feel. The moisturizer is pretty good, it is just that I feel its consistency is rather light but besides that like it a lot. It has the typical Nivea scent and lasts a long time, makes your skin smooth and fragrant. I find myself using the Express Hydration more in summers than in any other season. It absorbs quickly and comes in handy during the hot and sweaty summer months! Another good thing about this moisturizer is that it does not leave that sticky residue after application. My skin feels wonderfully hydrated minus the grease. Worth checking out!

Long before I even thought of anti- aging products I stumbled upon Nivea Body Lotion and am so glad I did. As a teenager I had a major problem with dry and itching skin and one day at our local drugstore "Nivea" caught my eye, I thought I would purchase a bottle and bring it home to test, I fell in love with my smooth silky skin, That was thirty eight years ago and I've stuck with this stellar moisturizer through the years. i would have never believed that it would just keep getting better, Before I turned thirty I was using Nivea on a regular basis first thing in the morning and last thing before I went to bed at night. By than I was using it on my face and body and I still receive compliments now on looking way younger than I am actually. Subscribed members of the Nivea website online receive emails offering coupons and samples of new products. Participating in one of these promos I received a sample of Express Hydration Nivea which proved to me that the best keeps getting better. Once applied Express Hydration will continue to nourish your skin for up to 48 hours, Again, I cannot express how wonderful this moisturizer is. It may sound cliche but my skin feels as soft as a baby's bottom. This is one product that I have been sharing with others over the years and will gladly continue to do so, Scent Light scent, not overbearing or too strong Absorption Absorbs quickly as not to leave your skin greasy

I normally do not use lotions. However, after being bedridden with a broken ankle which required no weight-bearing for two months, bathing in bed was definitely not the equivalent of the daily showers I was accustomed to. As a result, overall my skin was becoming dryer than I have ever experienced. What was really extraordinary was that the skin on my feet, especially my foot with the broken ankle, was so dry, that the skin was actually cracking and pealing quite extensively. I asked my son to find me some lotion in the house and he found Nivea Milk, that my late mother formerly used. When I tried it, it was awful because it was very runny (just like milk) and I did not care for the fragrance. After I told a nurse friend of mine about all this, she stopped by after purchasing a container of Nivea Express Hydration. When I saw it, I was disappointed that it was another Nivea product, the fragrance of which I did not like. But after noticing the very pleasant aroma of this one, plus the ability to firmly apply this lotion to my severely dry skin, I was relieved. First relieved, then amazed by how fast and deeply it hydrated all that dry, cracked, peeling skin on my foot. Since I kept that foot immobile, the lotion was not impeded as it was absorbed by my skin. I reapplied more within several hours, I experienced further refreshing relief. Where my foot was practically encased in a hard crust, the skin was now softened, supple, and felt like it could breathe again. I really like this particular Nivea lotion and highly recommend it!