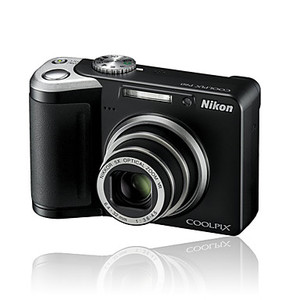 I have never been a huge nikon fan, but after finding a great deal on the Nikon P60, I must say that I am very impressed. The camera is a little wide for a small point and shoot, but very impressive nonetheless. The picture quality is pretty good overall, and the camera itself is very easy to use. The battery life is fair, but very good with rechargeable batteries. The 5x optical zoom is very impressive, and pictures overall are pretty good quality, even indoors. Photo quality in the evening is fair, but the camera for the price is very good. There are many different settings that can be easily used on the camera. The video quality, although not HD, is still very good, and one of my favorite features that never seems to be on cameras anymore is the digital viewfinder. This can save a lot of battery life, and still has a great quality and is easy to use. My camera recently died after taking a beating, but I loved the camera for the duration that I owned it.

I have owned this Nikon P60 Digital camera for a year and a half.  I have a small child, so I take pictures constantly.  I have owned several digital cameras since they started coming out and I wanted something a little more moderate digital and higher end than just my basic digital camera that I have in my purse everyday.  What sold me on this version of the Nikon the optical zoom.  This allows me to have clear, larger pictures when I do enlargements.  One of the key additions for this camera is having a SD card that will hold lots of pictures or videos.  It does have an video feature on this, works very well.  The battery holds charge well.  The display and functions are very user friendly, easy to learn.  I wish the screen were larger, but it is not a negative thing.  My 5 year old is able to use the basics on this camera without any problem.   This camera is very durable, made well and made to last.  It has been dropped hard 2 different times, with no problem to it at all.  I would highly recommend this Nikon P60 Digital Camera!

I purchased this camera after an older one broke.  It happened to be on sale for a decent price, which was the first reason we looked at it.  I was also interested in the Mega Pixel support, which is 8.1.  Our previous camera only supported 7, and because I work in print and design, I know how important high quality images can be when it comes to reprinting, enlarging, etc. This camera was very easy to learn to use, and the video option works MUCH better than the one on our previous camera.  With the Nikon Coolpix P60, the video footage is clearer, the sound quality better, and this camera's ability to detect light is far superior.  With the old camera, our video footage was always incredibly dark, even if we were out in broad daylight, or indoors in a brightly lit room.  That alone was enough to make me want a new camera.  I am very pleased with what the P60 does for me! The camera also has a "Scene" function, which automatically sets the optimal settings for various environments, such as indoors/party, outdoors, backlighted scenes, scenes at night, dusk/dawn and indoor scenes.  The indoor/museum scene automatically turns off shutter and button noises, in case they might interrupt or annoy the people around you. There are also several flash settings on this camera, such as "auto flash," "red-eye flash" and "no flash" which make it pretty easy to make sure you're getting the right amount of light every time. The P60 uses an SD card, which means it's very easy (and inexpensive if you can find a good sale) to find memory cards for the camera.  I reccommend having at least two seperate cards with you at all times, because you will have to take many snap shots of the same scene in order to pick the best of the series for reprinting or enlarging, which brings me to my next point... Cons: There are a few cons with this camera. 1) Snapshots come out blurry 9 times out of 10 if you don't hold the camera absolutely still while taking photos.  This makes me think that the camera would be best used with a tripod, but that is unrealistic.  If I am at a family outing, or taking candids of people at a party, I'm not going to have time to stop, set up a tripod, attach it to the camera, and THEN take the photo!  In theory, I ought to be able to adjust the shutter speed so that I don't have this problem any more, but I have not yet taken the time to sit down and go through the instruction manual to see if there is a way to do that.  Not only that, but I feel that the camera should have been automatically set to optimum shutter speed right out of the box.  I should not have to go through a long list of menu options to make my camera function. If I am taking night time photos, then I can understand a slower shutter speed, but when I set the camera to operate in bright light or back light, I should think the shutter speed would adjust! 2) The flash seems to be an enormous drain on the batteries.  I use rechargable AA Duracell batteries in my Coolpix P60, and I have to wait several seconds (and sometimes as long as 30 seconds or more) after taking a picture with the flash turned on before I can take another.  For events like birthday parties and times when you'd like to be able to snap several photos all in a row, this is inconvenient.  I definitely reccommend purchasing some high performance camera batteries specifically for use in this camera.  Duracell makes a high performance rechargable that works pretty well when it has a full charge.  If you have a 15 minute charger, you will never be without full batteries for use with this camera! I wouldn't reccommend buying regular AA batteries, because you will go through them far too quickly, and that would be a very big waste of money! 3) Size.  This camera is a little larger than the one I had previously.  It doesn't weigh much more, but it has a somewhat bulky handle or grip on the front that makes this camera somewhat hard to store.  My last camera fit into a pocket, which made it ideal for taking on vacations.  I did not need to purchase a seperate carrying case for the camera to lug around with the rest of my baggage.  I could just tuck it into a pocket and take it out the minute I needed it.  With the P60, I can't fit the camera into my pocket.  This has led to many times where I was too late to catch a great photo opportunity, because I was fumbling around in my purse or bag for the camera.  I like to be able to keep my camera handy at all times, and I was slightly disappointed to see that this one was larger. Conclusion: If you are able to overlook the minor cons this camera has, and I am, then you will be happy with the Nikon Coolpix P60.  The fact that it is able to take good video footage in addition to standard still photos was more than enough to outweigh the minor bad points the Coolpix P60 has, in my opinion.  And, if your camera is already very bulky and you're accustomed to carrying it around in its own case, you won't have to worry about this camera.  It isn't a monster, it's just larger than my last camera. In short, this is a good camera for the price I paid.  I would definitely purchase from Nikon again in the future.