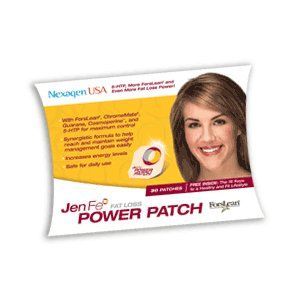 I really loved them. I need to buy some patches and I don't know were... I can't find them. It seems there are no more nexagen workers in my Country, México. Pls tell me how much do they cost, and where to find them. Thanks

I was about to purchase when I decided to read the terms before purchasing. I called the number I would have to call in order to cancel and it was a generic home answering machine. You've reached Full Life leave a message. Don't do it, you'll never be able to stop them from drafting money out your account. So glad I called the number first before giving my cc info.

Oh my, where do I even start on this amazing product. I hate to sound so dramatic but this product has literally changed my entire life in multiple ways. It took over two months for the product to kick in for me but I am so glad that I didn't give up or else I would never be writing this review. I suffered from low energy, moodiness, terrible pms, uncontrollable sweet cravings, depression and probably a few more but I will stop there before I really make myself look bad! lol When the product finally kicked in for me, it was literally like night and day. I did not start on this product for the weight loss aspect (although I could lose a little weight), I started on it for the energy, mood elevation and to help get my sweet cravings under control. I wasn't exactly sure what to expect but I am THRILLED with my results. I never eat late night anymore which was a problem for me, I haven't had any desire to eat candy, cakes & cookies or drink soda. For me, that's amazing. I never had to go through any withdrawls or deprive myself. They just weren't appealing to me anymore. Now of course when you stop eating unhealthy foods that have always been a part of your normal diet, you are bound to lose weight. That's where I am now.....Everyday I wake up feeling thinner and happier. My depression is gone, COMPLETELY GONE! (what a blessing!) My "monthly experiences" are a breeze and I am living a happy life now. Although I chose to be a distributor of this product, it is because I found my results to be so drastic that I just want to help anybody who may have suffered from anything that I have. I know of people who have felt results in the first week and some that didn't for quite a few months down the road. But every single person that I know that has really stuck with the product ended up getting phenomenal results. There are some factors involved. I had to find places on my body that the patch didn't irritate. So I chose the top of my forearm. Underneath my forearm is too sensitive so I chose to wear it loud and proud. I wanted a place with less fat and more blood flow and that spot works excellent for me. I did try my upper arm but there was too much fat there and I wasn't getting the results that I wanted. I didn't want the ingredients of the patch to get lost in my fat cells and wanted to get it more into my blood stream and when I switched the area, I was amazed! I hope that this helps somebody reading!

Believe me, I have always been one skeptical guy.....however, I did try the Fat Patch after attending one of their weekend training sessions (as a guest of my wife who was training to be a distributor).  What convinced me to try it was the parade of people who lined up the walls on both sides of the meeting hall to give a two-minute personal endorsement of the product and how it affected them.  A real variety of folks in all age groups.    Between October 12, 2005 and March 12th, 2006 I dropped from 191 lbs to 178 lbs and went from waist size 42 1/2 to 40.  I kept nearly a weekly chart on my progress (I still have it - see below).  I noticed that some weeks I would remain the same or go up one pound, but then the following week I would drop a pound or two or even three.  I also felt "perkier"; didn't have the desire (or need) to eat as much at one sitting; had no desire to dig into the leftover Halloween chocolates, (they stayed in the bowl all winter long) and how I DO love chocolate.  Then, I backslid and quit the patch, but I told the wife today that I am going to give it another go, seeing as how I am back at 193 now.  During those five months, here is how my tracking showed that I did:  191,189,186,186,189,184,183,182,181,179,180,180,178.  Those are just 13 of the 20 weeks that I recorded my weight.    Oh yes....my former cardiologist told me that if I was going to take something to lose weight, then he would rather see something that can be taken off (a patch) if a reaction occurs than having had taken a pill and it is dissolving inside the body and not retrievable.

I've use the product for about a year and have lost over 30 pounds of fat going from a size 38 pants at 209 pounds down to a size 32 or 34 pants at 180 pounds...  I drink water now, which is something I could never bring myself to do before the patch regularly....  and I've introduced it ot others who I've watched lose weight before my eyes...  I've seen my brother drop 45 pounds in 3.5 months, along with his wife, my best friends wife, aunts, friends and strangers lose weight on this product.  No, it's not a miracle in the sense you can eat cake and ice cream all day and lose weight.  It is part of an overall healthy approach to managed weight loss and nutrition and has proven to be a great asset in helping me control my weight and keep off fat.  I'd recommend this to my own mother...  Wait, I DID and YES it works...

I lost weight only because I started Exercising not because of  the patch... The patch only made me my skin itch. I was told my a doctor that this method does not work. When I started the patch I was suppose to get more energy NOT. You can try this if you want, but this did not work for me. I have gone back to the old fashion way. Right diet and exercise. Oh, by the way you might not want them to start a bank draft either because they will "forget to stop pulling from it"   Sorry Nexagen you just don't work...

The Jan Fe weight loss patch didn't do anything for me even though I stayed on it for 4 months.  I had about 15 friend that used it also because they conned me into being a distributor.  I lost a lot of friends.  It didn't work on anybody.

The JenFe Power Patch has had a tremendous impact on my clients. I own a women's fitness center and teach nutritional classes. All of them complained that it was the cravings for sugar and white carbs that kept the backsliding. When I got introduced to this I decided to give it a try because of several reasons. 1. There is no pill schedule, you're not having to take a pill mid-day, one before you eat, etc. 2. There are no high and low mood swings, in fact it helps level out moods 3. There are no jitters or "highs". So I tried the patch, (did find I do get irritation on wrists, nothing a little hydrocortisone didn't cure) and 2 days in-cravings were gone! Now I can implement a low-glycemic diet and bam the weight is coming off. My clients love it and I truly cannot keep them on the shelf. I rated it above average because do I think it works. Outstanding-no, but it is a great tool to help with weight loss. It is not a slap on a patch and go eat pizza, now that would be outstanding! But we all know that healthy lifestyles promote weight loss and this is a great tool to help get you there! My Time Women's Fitness-Ft. Worth, Texas-817-246-0644

JeFe Power PatchI have been using the JenFe Power patch for since July 2007, when I called for information after reading about the patch in a magazine ad. I told the lady that if it worked for me not only would I buy it, but, I would help sell it. To date I have loss 27 pounds.I am much leaner and fit my old clothes better than I did when I brought them. It took about six weeks before I begun to lose the pounds, but I started losing inches within the first two weeks. I will continue to use this patch because in addition to the fat loss I am experienceing a lot more energy. I believe in this patch so much that I have become a distrbutor. Now that says a lot because I have never sold anything else in my life. I find that since I am a walking advertisement it is easy to get customers.