Other Multivitamins:
Brand:
Nature Made 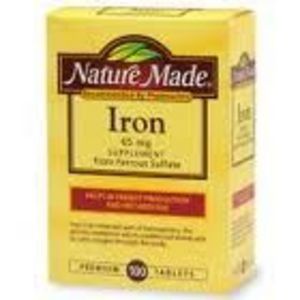 This is a good product i tested for iron supplement some time ago , it was really in my school days when i had enough unbalanced diets which prompted me to taking supplements. I severally got a bad breath and some weakness over time and when i met a chemist at the shop and related my situation, with proper examination, he recommended this supplement with others after he told me that my bad breath was a result of reduced oxygen in my system due to reduced iron. Initially i took this supplement daily with ginseng and noticed a gradual and steady improvement over time. My breath returned to normal but i had some side effects which included mild stomach upset and dull dry mouth.i had to change my daily consumption to weekly and that i guess reduced some of the problems i got with it. However, it was really effective, helpful and helped saved my condition.

Recently I was feeling very tired and bruising very easy and just feeling weak. I went to the doctor and my doctor required me to have blood work done. It came up that I was low in iron so my doctor recommended to use the nature made brand iron pill. After using it for a few weeks I started feeling a lot better and back to normal. I was no longer tired and I didn't feel like I had the symptoms of low iron anymore.I went back to the doctor for a follow up about 2 months later and was told everything was better. These pills helped so much. I was always sleepy and weak and even felt sore, which I was told is also another symptom of low iron. I would recommend this pill because it does work and is very effective.

I have always suffered from anemia. I have tried a lot of iron pills but most of them had side effects so I wanted to find something gentle. I tried these and they were perfect. I took them for about 5 months and went for a blood check-up - the doctor actually told me to stop taking the pills or reduce the amount because my anemia was basically gone and my iron level was much higher than normal. So now I only take maybe 1-2 pills per week instead of the one per day as recommended and this keeps me at the right level of iron and anemia doesn't come back. I didn't really have any side effects with this pill (other iron pills made me constipated) but it may vary individually so please try a few before you settle on one. I would also warn you that these are so good that your iron level might become higher than normal like me. So check your blood level frequently if you are anemic.

These iron pills have been one of the easier ones to take that I have came across. That being said, I still did not enjoy these very much. My iron stays just low enough to be considered anemic and I've had several prescriptions and over the counter products for this ailment. These particular vitamins seem to be one of the most gentle. Again, that being said, they do tend to upset the stomach. For me, it didn't matter if I took them with a meal, before a meal, after a meal, hidden in my food, by themselves, before bed, after I first woke up, with bread and milk, whatever, any of those remedies and suggestions, my stomach was still upset and I could taste the iron pill in my mouth and throat all day long. They also tended to make me feel a little queasy which takes some getting used to. I may be divulging too much information, but these also have a tendency to turn the stool a little orange colored or discolored and when you burp/belch they can still be tasted. Iron is a difficult vitamin to have to take and isn't always easily tolerated. What didn't go well for me may go great for someone else, but in the grand scheme of things, I was able to go from having an iron level of an 8, to a respectable 12 and eventually 14 after using these for about six months. I did have to start off using only half a pill a day then switched to taking two halves a day, then I took one in the morning and a half at night and finally was able to take the DOCTOR RECOMMENDED two per day to help boost my iron levels without having to suffer through infusions. As I said, everyone is different but in my case, these just didn't settle well on the stomach but were one of the best ones that I have tried and did settle best overall. I give them a 8 but would really give them perhaps a 9 in the grand scheme of things as compared to dealing with 4-8 hour infusions.

After I had my kids I really needed a extra source of iron and found this supplement and I purchased it to try it. I noticed with taking an iron supplement it seemed to irritate my stomach I have since learned that I need to take my iron with a meal so it does not bother my stomach I am doing a lot since I started this iron supplement and have been able to get my iron up to a normal range and keep it there. This is a popular brand of vitamins so I know I can always purchase it at any store that I can go to. I like to know that I can depend on a brand to have all the vitamin and mineral supplements that I need to live a healthy lifestyle. I like that this brand has many other vitamins and minerals that I can purchase at any time just like this iron supplement I will use this brand for my future vitamin and mineral needs I highly recommend this brand of vitamin and mineral supplements to anyone because they of excellent quality.

I like to take Nature Made Iron because it works pretty well. It does not have yeast, starch or gluten in it. It does not have preservatives in it either. I take one daily. I usually take it in the morning. I like to get most of my iron from food. When I don't, I take an iron supplement. I like to take iron when I feel tired. It gives me a little more energy. I get more things done during the day when I take it. I don't want to become anemic. I eat a lot of fish, chicken, spinach, kale, and broccoli, which are rich in iron. I also eat a lot of nuts. When I take iron, I do not take it for a long period of time. I usually take it when I am run down. I like to take iron supplements when I have female issues as well. I only recommend this for short-term use. I don't want to experience any side effects. They can be unpleasant. These tablets are easy to swallow. The iron comes in a small container with writing that is easy to read. This supplement by Nature Made is reasonably priced. When I have a coupon or I get it on sale, it is a good deal. I give "Nature Made Iron" 3.5 STARS.

I used to have a very low iron level which forced me to have to take an additional iron pill and drink geratol. I tried a few iron pills and did not like them. One day I bought these and after going through so many different kinds, they were the first ones I liked. Iron pills usually would make me feel sick, these did not. I was very surprised/happy to finally find one that worked so well and did not make me feel sick. I like the design on label and colors are eye catching. These iron pills are also a good value for the money. My condition of having such low iron used to cause me to be very tired/ drained out. These iron pills helped tremendously with that so I could function normally and get better. I believe these pills would be excellent for anyone to use. I would recommend to these to anyone who has low iron or just wants extra iron in their diet. I am extremely pleased with this product!

I was diagnosed with anemia years ago, and my doctor recommended that I take iron supplements to aid in blood cell production. The first brand I tried was Nature Made, and I have primarily taken it ever since. It is an affordable price, and has a small pill size, making it easy to swallow. Unfortunately, taking it daily can cause constipation, so it is important to drink a lot of fluids/water- basically stay hydrated. I also at times need to take a fiber supplement to aid with the constipation. However, this has nothing to do with the brand, but is related to the iron itself. Aside from this, I have found Nature Made iron to be easy on the stomach, and after several years of consistent use, learned from my primary physician that I no longer need to take it. However, I would suggest a visit with your doctor before making changes in your iron intake yourself. I would definitely recommend this brand of iron supplement to others.

I've been told by my OBGYN that I was anemic both times that I was pregnant. The last time, my doctor told me to just pick up some iron pills from the drug store. I settled on these from Nature Made. The price was reasonable, and since Nature Made is a well known brand I assume that the quality is there. They brought my Iron levels back up to normal quickly and by my next appointment my doctor said she could see a marked change in my blood test results. I was happy with the results and continued to take them throughout my last pregnancy. I didn't have any bad side effects. I generally took them with a meal, so I'm not sure how they would react to an empty stomach. I would definitely recommend these iron vitamins from Nature Made to anyone suffering for Anemia or any kind of iron deficiency. They worked very well for me and my doctor said they were safe to take while I was pregnant.

I gave this product a 10 simply because I love the brand, but also because of the iron and what it has done for me. I had to start taking iron supplements a few months ago because of constantly being tired all the time, at home, at work, even sometimes while driving. It seems the sooner at sat down in a chair I was dozing off. I went to the doctor and was informed my iron levels were low and recommended this brand to try. In about a weeks time, I was back to my old self. I have normally been getting by with about 5 hours of sleep a night, rising at 5am every morning for quite some time. It felt like that schedule was beginning to take its toll as it seem the longer I slept more groggy I felt. I was just constantly tired, all the time. This product did the trick for me and I could not be happier. I love this brand. It is well worth the investment. I found at a store near me for really cheap also.