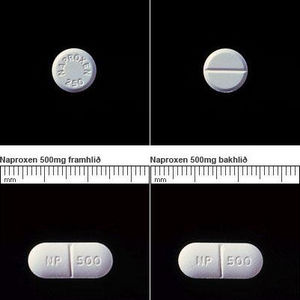 Well believe it or not I have played sports and was a pitcher in little league as well as at school. I have done so much hard labor work which actually helped keep me healthy and it took leaning on a desk at my computer to do what has happened. I have known many people that had water on the knees and or shoulders and had to have it drained to get a cortisone shot from the Doctor. Well they gave me medication to try and dry it out. I have what is called Bursitis and they want to let it dry out instead of draining it.               **Naproxen 375 MG Tablets** is in a class of drugs called nonsteroidal antiinflammatory drugs. Other members of this class include ibuprofen (Motrin), indomethacin, nabumetone(Relafen) and several others. These drugs are used for the management of mild to moderate pain, fever, and inflammation. They work by reducing the levels of prostaglandins, chemicals that are responsible for pain, fever, and inflammation. Naproxen blocks the enzyme that makes prostaglandins (cyclooxygenase), resulting in lower concentrations of prostaglandins. As a consequence, inflammation, pain and fever are reduced. Naproxen was approved by the FDA in December 1991.                My problem is the many **SIDE EFFECTS:** The most common side effects from naproxen are rash, ringing in the ears, headaches, dizziness, drowsiness, abdominal pain, nausea, diarrhea, constipation, heartburn, fluid retention and shortness of breath. So if you are asked to take it talk to the Doctor first because if you can keep from it I would but I have to temporarily.

I really really like the product naproxen, I use it regularly for pain and swelling in my back. it keeps the swelling down which keeps the pain down. I went to the urgent care where i was given thisa product for the pain in my back which the doctor believed was caused by inflamation from being irritated at work by constantly walking on cement floor and having to lift things regularly. I also have a few coworkers at a paper mill that i work at who also take this product call naproxen. One thing we really like about this product naproxen is it does not make you drowsy, so you can take while you work and dont have to worry about it making you sleepy or impairing your ablity to work heavy equipment. which is a nice thing to not have to worry about while you work. I also enjoy this product called naproxen because it relieves the swelling  very fast, it seems like within 20 minutes or so it starets working which is a nice relief when you are working and you have like 7 hours left in your shift and you can some relief from this product called naproxen.

I have tried numerous nsaids over the course of my orhthopedicly challenged life. I have found Naprelan to be one of the best medications for my issues out there. The fact that it is a once daily medication is definately a plus. I know there is no cure but this medication has made living with my health issues easier to tolerate. I have found it to be more effective for my aching joints than its counter part naprosyn , a multi dose medication . My Orthopedic Surgeon gave me a sample initially to try it out . I had been on another nsaid for years and I believed it wasn't as effective any longer. Plus being a multi dose medication coupled with the prolonged usage made it a greater risk of G.I. problems. I have been using it now for three months.  Thanks Doc!!!

I started taking Naproxen Sodium 550 mg each tablet, in the early 90's. I was put a dosage of 2 or 3 daily, for a inflammatory disease. My feet and legs would swell, and cause me a lot of pain, making even standing up on my feet very painful. I noticed right away that if I didn't take this medication with food that it made me have a very painful stomach ache. It felt like I had swallowed battery acid or something. It burned from my mouth all the way down deep into my stomach. I asked my doctor about the stomach problems and he told me that it wasn't a big deal. Well, several years, and many pills later , it became a very big problem for me. One evening I had what felt like a diarrhea stomach ache and went to the bathroom. I did indeed have to go to the bathroom. When I looked into the toilet I was horrified. It was full of pure, bright red blood. No stool at all in the "bowel movement". I nearly blacked out. 45 minutes later I repeated the same thing. I crawled to bed hoping that whatever it was, it would go away. Well, obviously it did not go away. Within 2 hours of the first stomach pain, I was going into shock, and shaking involuntarily, like convulsions. I became terrified. My husband decided right away that I was going to the emergency room. At this point I was beginning to blackout again, so my husband called an ambulance, and away we went. They performed the "tube down the throat" test on me, and they found an ulcerative spot in my small intestines, and cauterized it, and sent me on my way. Well, 2 units of blood later, and a long road to recovery, I started feeling better. I was anemic and was put on iron for a few months, as well as a multi-vitamin. When the doctors found out that I had been taking that much Naproxen Sodium for that long, they weren't surprised, I however was very surprised. I had asked my doctor repeatedly about this, and assured that it wasn't a big deal. It seems that he was wrong. When I had grown strong enough when I got home from that ordeal, I threw away all of my Naproxen Sodium, and don't expect that I will be taking that again. If your doctor wants to put you on this medication, be very careful. I wouldn't want anyone to go through what I had to go through.