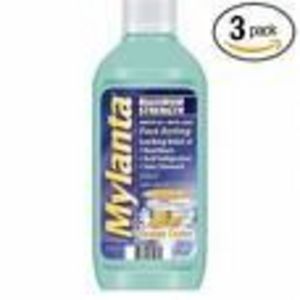 **Mylant**a has been a good Over-the-Counter medication for me when it comes to treating stomach aches, heartburn, and indigestion. I don't get sick too often, but I always keep a bottle of Mylanta on hand since this is the most common ailment I get. **Mylanta Maximum Strength liquid antacid** comes in 12 and 24 ounce bottles that are a unique aqua color. There are currently four flavors as well: Regular, Mint, Cherry, and Orange. I prefer Cherry myself since it's somewhat sweet and offsets the somewhat chalky texture of the product. The symptoms that **Mylanta **claims to treat seem to stack up well with my experiences, which are as follows:  • heartburn • acid indigestion • sour stomach • upset stomach  • pressure and bloating (gas) I take about 1 tablespoon of **Mylanta** when my stomach is feeling queasy or I have heartburn. The symptoms lessen with 45 minutes or so. However, I usaully need a second dose a few hours later to take away most of the pain. This medication goes down easily (just remember to shake the bottle) and has no bitter aftertaste. There are some possible side affects associated with **Mylanta **as follows:  • diarrhea • stomach upset  • constipation Unfortuantley I sometimes get a touch of the first one on that list after taking **Mylanta**. It's not full-blown diarrhea, but everything loosens-up down there. But the side-affect does not last long and is tolearable. I don't take many Over-the-Counter medication but **Maximum Strength Mylanta** is one that has always worked for me. It greatly relieves symptoms of an upset stomach and related maladies. It's also available in chewable tablets which may be better when traveling or to take to work. I recommend this product without hesitation, but just hope you don't need it very often.

I normally don't get sick often; the most serious illnesses I've endured have been bouts of either the flu or the common cold. Other than that, I only get an occasional headache or some soreness in my neck and back areas. Stress, though, has been entering my life over the past four years; my mom is having a health crisis that has dragged on for nearly for four and a half years, I don't get to travel much anymore and other personal issues are somewhat confusing. As a result, I'm sleeping restlessly, getting more frequent headaches, and suffering from bouts of sour stomach. Although I much prefer to chew on a couple of Tums tablets when I feel a buildup of stomach acid coming on, sometimes we'll be out. My mom, after all, is suffering from a mysterious digestive system ailment and she needs to lower her own stomach acids, so with two people taking Tums it's easy for one bottle to be used up in a week's time. And that, obviously, is where Mylanta comes in. Mylanta Maximum Strength Liquid, which is made by Johnson & Johnson-Merck, is one of the more popular antacid liquid medicines in the market today, and it is very effective for relieving the painful symptoms of heartburn, sour stomach, acid indigestion, and "gas," which is the common term for pressure and bloating. It comes in two sizes (12 and 24 ounces) and four flavors (original, mint, cherry, and orange creme). **My Viewpoint**As I said earlier, I normally don't get sick often, but with all the stress I've been under lately, I recently had to resort to taking Mylanta Maximum Strength Liquid.. I looked first for the Tums, but mom only has a few left, and because she's really in delicate shape, I didn't want to deprive her of the better tasting medicine. So I reluctantly went to the main bathroom and grabbed the green-blue bottle of Mylanta, shook it well as per the directions, then took two teaspoonsfuls, making an involuntary *Oh, ick* grimace as I tasted it. (Classic Flavor is hard to describe...it tastes like a muted spearmint/wintergreen cream but chalky. It's not gross, but it's not a flavor I can get used to easily, either.) Fortunately, it didn't take too long for the Mylanta to ease the sourness in my stomach. I didn't watch the clock to time it exactly, but I estimate that the medicine eased the acid levels within five to 10 minutes, and around an hour later I felt well enough to eat a small breakfast.Although I *still* prefer Tums chewable tablets, the Mylanta Maximum Strength Liquid *does* its job just as safely and efficiently. Other than the chalky taste, I have no complaints about this product, and I strongly recommend it.