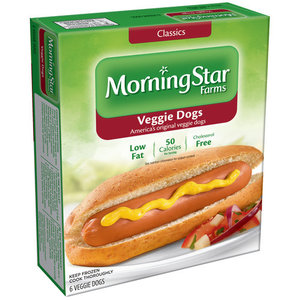 I am no longer a vegetarian, but I hands down still prefer these to meat hot dogs. not only are they much lower in calories and fat but they also taste really good, I am not a big fan of the "snap" texture of beef or pork hotdogs, i like a tender bite, so these are really perfect for me, and the taste while not exact is pretty close.

I've tried several brands of veggie dogs and these, by far, are the best!  Whether boiled, microwaved, grilled, or browned in a frying pan, they taste great.  If there is one negative, it would be that they feel a bit slimy when thawed.  As soon as they are cooked, that feel is gone.  They're also very low in fat.

Morningstar Farms Veggie Dogs--a good alternative to high fat beef hotdogs.  They have a comparable texture and can be prepared the same.  These can also be ground and made into a sandwich spread by adding some pickle relish, onion and mayo.

I switched to Morningstar's (Kellog's) veggie dogs when I could no longer find the Quorn brand hot dogs, but now Kellog has decided to discontinue the Morningstar veggie dogs.  The soy laden veggie dogs in the refrigerator case that I've tried just don't measure up.  I guess that I'll just have to get used to Quorn chick'n cutlets in my baked beans.

I HAVE TO SAY I DO LIKE MORNING STAR BRANDS OVER ANY OTHER..  AND FOUND THAT THE VEGGIE DOGS( ***NOW DISCONTINUED.. WHICH I CAN NOT BELIEVE***) ARE THE BEST. THE "TRICK" I FOUND ***WAS*** TO  THAW THEM IN THE MICRO WAVE, SLICE IN HALF, THEN PUT ON TO A HOT SKILLET WITH A SPRAY OF PAM.  THEY COOK UP LIKE THE ONES MOM USE TO MAKE, THEN THROW IN SOME ONIONS AND GREEN PEPPERS.. AND PLOP THAT ON A HOT DOG BUN.. SOO GOOD.  MY HUSBAND COULD NOT TELL THE DIFFERENCE!   THE CORN DOGS ALSO ARE..(WERE) BETTER (ALSO DISCONTINUED??)  THE SAME WAY.. COOK THEM THE  CORRECT TIME IN MICROWAVE, LESS 20 SECONDS OR SO, THEN ROLL THEM ON A ***HOT*** SKILLET *SPRAYED WITH PAM*.. TALK ABOUT A CRUNCH..  THE BEST.. I MISS MY HOT DOGS.. I'M IN MOURNING.. BRING EM'BACK!!!!!!!!!!!!!!!!!

I just called about these because I noticed they were not being sold anywhere.  Kellogg's informed me that they discontinued them back in June!  These where honestly the best on the market - and Morning star has a lot of products but those dogs next to the bacon was the best  Very bad move on their part

**I have been a vegetarian for 6 months and was missing some meat item.  These were very good hot dogs.  As is the case with a lot of meat substitutes the texture too soft but the flavor was good and better than another brand I have tried.  I am always on the lookout for good meat substitutes and this one is good not great but good.**

I remember, when I was young, standing in line for a Hoffman's hotdog at Heid's Hot Dog Stand in Liverpool, NY. All they sold were hot dogs and coneys and people would wait in the heat for up to an hour just to grab a freshly grilled dog. As I grew older, I realized hot dogs are pretty much junk. Everything left after packing other meats is tossed into a big container and dubbed "hot dog ingredients". The fat and calories in a typical hot dog is so high, I stopped eating them years ago. I started to experiment with veggie hot dogs, missing the hot dog experience but not wanting the fat, calories, and chicken lips in real hot dogs. I will eat pretty much anything but **Morningstar Farms America's Original Veggie Dogs**, which are supposed to be the best tasting vegetarian hot dogs, made my skin crawl. **The Product **These dogs have a bounty of ingredients that don't look very appetizing such as corn syrup solids, brown sugar, cellulose gum, xanthan gum, and carrageenan. Somewhere in there is vegetable and soy protein which is the meat replacement. They are typical packaged hot dog size - not the long, mouth-watering size of the hotdogs we waited in line for. Little sticks of pinkish ... uh ... stuff. However, one of these things has only 80 calories and one half gram of fat! That right there was enough for me to take a chance and grill up a couple of these dogs last summer. **And How Do They Taste, Patty? **I grilled the veggie dog and it didn't look very much like a hot dog. It resisted grilling and stayed slim and light pink. Forging ahead, I put it into a reduced calorie bun, tore off the ends of the bun since the hot dog was drowning in all that bread, and gave the dog a little squirt of mustard. I have eaten several vegetarian products from Morningstar Farms, notably their burgers, and everything was always decent. Until now. I took a big bite of the veggie dog and ACK! It was sweet and didn't taste AT ALL like a hot dog. It tasted like, um, hmm. Like a rod of yeck. I don't know how else to explain it. The texture wasn't like meat. It was like a sponge. Chew, chew, chew ... It never seemed to actually break up enough to be swallowed. I am very, very tolerant of foods that are low in calories and fat because I would rather eat something that doesn't taste great than gain weight but these just put me over the edge. I couldn't finish the one I had. I tried. I really tried. But, some things can't be duplicated and a good, grilled hot dog is one of them. I couldn't get my sons to go near one and my husband was squeamish looking at the little links of vegetable and soy protein. My dog, who eats Styrofoam and kitty litter, turned up his nose and walked away when offered a **Morningstar Farms America's Original Veggie Dog. **He wasn't fooled. His nose knew that was not meat. In all, while these are a low fat, low calorie alternative to regular fat laden hot dogs, I simply can't bring myself to eat them. Now, if I really want a hot dog, I have one. It's rare - maybe two or three times a year at best - but I would rather have the real thing (chicken lips and all) than to gnaw on a veggie dog. Vegetarians will hate me and I am even disappointed in me but I simply can't gag down veggie dogs. **My Viewpoint** **Morningstar Farms America's Original Veggie Dogs** are probably great for vegetarians who are used to the taste or who have never experienced a real grilled hot dog. But the texture, taste, and even the look of these things is unappealing to me. I eat almost anything that is good for me and that doesn't add unnecessary pounds and clog my arteries but I simply could not manage to eat a **Morningstar Farms America's Original Veggie Dog.** ***I rate these 2 stars.*** I have tried other veggie dogs and they all taste similar to me. Too sweet, too weird, and nothing at all like hot dogs. This weekend, I'll stick to grilled chicken breast while everyone else chows down on hot dogs. And when the day comes this summer - and it will - that I just HAVE to have a hot dog, I'll go to Heid's and stand in line like everybody else.