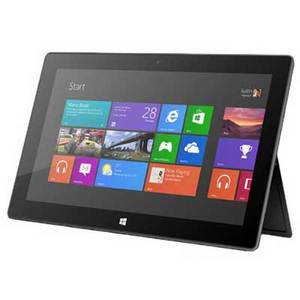 I use this all the time because of how perfect the size is making it easy to bring anywhere I go. I especially love how it keeps me organized between my busy school/ work/ social life. All in one tablet

I like my tablet because it's just like a mini-computer. The desktop function is particularly useful because I can switch back and forth between the traditional desktop style and the new tile style. With the tile style, I can customize it to suit my needs. Because it's Windows based, it's not difficult to use.

I have other tablets and they always fell short in the area of doing stuff that I have to do for work, it was just really hard to be able to do anything on them other than being able to check and reply to e-mails. I got the Microsoft surface because it has the ability to do things on Microsoft word and other Microsoft works programs, so making working from wherever I am really easy without having to take a big bulky laptop. It also has a snap in keyboard that is great and makes it easy to type on it. It is very fast and always opens things so quickly. The battery is really remarkable on this, it lasts for well over eight hours all of the time. It is so light weight and easy to take with me anywhere, I stick it in my bag and go. My kids love to also play on it and it is really fast with movies and games when they use it. There are lots of apps that you can download to use with this and it runs everything that I have ever put on it flawlessly. It is a great tablet and the best one you can buy.

Before I knew anything about the Surface I thought that there was only one model with different hard drive capacities, so when I purchased the RT I figured I was buying a tablet that runs full windows. I was completely wrong and realized very quickly between full windows and Windows RT. The only programs I could install on this device were apps from the Windows Store. I was upset at first, but I got over it once I figured out that this device met my needs and that it could be an excellent media tablet. I have used this device to stream countless hours of movies/television shows and music to my television seamlessly with the help of Chromecast. I also play older versions of GTA, Metal Gear Solid, and Fifa Soccer at a good frame rate despite not having an i5 processor. I also was surprised by how effortlessly the quad core processor handled me streaming music, and video while having 5 tabs open at the same time. I wish the screen had a better resolution, but the difference between 720p and 1080p isn't a big deal on a 10.6 inch screen.

This tablet really delivers in the technology department in my opinion. The new Windows 8 operating system is really nicely designed and it makes for an eye-pleasing experience. I would recommend this tablet for any kind of student because it is easy to work with and it has a beautiful design. Definitely worth the price. Battery Life I have not had one problem with the battery life on this tablet like I have hade problems in the past with other tablets. You can play games, search the web, and write a paper all within one battery life. It lasts for a very long time! Processing Speed Very quick processing speed, no problems in that department. Applications are quick to download and easy to open, you don't have to wait forever to load your favorite apps. Weight For its size, it does seem a little bit heavy. I think it could have been lighter if different materials were used possibly. App Availability There are a lot of different apps available for this tablet and a lot of cool free ones as well. Design It kind of sucks because when you close the built in stand, you have to watch out so you don't snip your finger in it. Durability I have seen no problems with durability so far.

Other than being able to run the most processor intensive tasks, this tablet covers all my needs. Processing Speed The processing speed isn't exactly the issue. It is rather the chip type. The RT surfaces have an ARM chip whereas the Surface Pro models have an I3/5/7 processor. This means the pro models can run any legacy app or developer software. The RT models, sadly, cannot. Weight Surprisingly lighter than I was expecting. The type keyboard weighs almost as much as the device itself. App Availability Since it is Windows RT, they're are some intensive and legacy apps that cannot run on it. Most of my apps are available in the app store. Design The ability to connect real USB devices and run video to an external display are some of the best features. My only real compliant is with the optional touch keyboard. The touch pad pointer area wasn't very responsive and the audible click sound was disruptive in quiet environments. We have since switched to a type keyboard with mechanical buttons and it is much better. It is well worth the extra cost and weight.

If you're looking to buy your kid a tablet that's great for the purpose of typing up essays, presenting power points, and school usages(like taking notes) this is the best choice you'll get. Unlike the iPad, it includes a full version of Microsoft's very own 2013 Office and a keyboard. There's not that many applications in the App Store, but that makes it an even targeted use for students. Processing Speed It's an ARM Processor, so don't expect too much out of it.

For people that are used to Microsoft products, this is an awesome tablet. This tablet was not only an app version but also a desktop version which is awesome because it feels like you have a mini desktop. In addition, I love that you can split the screen--while reading on one side, you can type on Microsoft word in the other. It is definitely very useful for students since it's small and not too heavy. The downside of it is the apps. Many of the apps do not work very well. But overall its a great product for everyday tasks.

The Microsoft Surface tablet is fantastic. I have read on other reviews that some people have had some issues with the RT version, but I haven't had any problems whatsoever, and I really make my tablet work. I have used both Android tablets and the iPad, and I can honestly say that I prefer the Surface over the others when it comes to usefulness and productivity. If you are just looking for something to surf the internet or mess around on social networks like Facebook, Twitter, etc., then any tablet will do. But, if you are looking for a tablet you can actually do some work on, the Surface is the one to get. Overall, I like the design. The size is good. The screen is good. It doesn't look like a toy, like some other tablets. The detachable keyboard is a great thing to have, too. Battery life is pretty average for a tablet. That's an issue that's less about the actual tablet, no matter what brand, and is more about current battery technology. Just like with smartphones, wi-fi does use up a lot of battery life. If you want to conserve battery life and aren't using the wi-fi, disable it. You'll gain a lot more battery life. This goes for any tablet or smartphone, not just the Surface. The only drawback is the lack of apps. The important ones are available, though, like Facebook, Twitter, and a lot of other major apps. Plus, there's Microsoft Office included. More and more apps are added every day, though, and as more people buy Windows 8 tablets, more apps will be developed. Sure, Android and iPad have a LOT of apps available, but have you noticed that a large amount of them are just duplicates, like 10,000 calculators. Who needs or even wants to choose from 10,000 calculator apps? It's extremely easy for all your Windows devices to work together. I can start a document on my PC and work on it for a while. Save it to SkyDrive. Later, no matter where I am, I can open it on the Surface and continue working on it (without having to connect the Surface to the PC or anything). I can even access the file from my phone without having to connect it to the PC or tablet. Plus, all your contacts can be synced across all devices, too. It's a great tablet. Most of the negative comments I have seen about it are people who hate Microsoft just for the sake of hating Microsoft and they've never even touched a Surface. If you want a tablet you can use for more than just internet browsing, social media, and games, this is the one to get.

This little baby was a purchase made to help me continue to manage family business whip our laptop was in for extended service. I started with a 7" tablet from another company, and it didn't meet my needs due to the size. Made the decision to go with something larger and when I found out this comes loaded with Windows- I was elated. This not only helps me to be productive for my family, I've used it for work when a laptop was just a little too big, and I get along great, Love the memory and the USB port. What a dynamite addition to our technology! Battery Life Long, long, long. I can go all day and then some. Very quick to recharge. It's only depleted the battery all the way twice. Processing Speed Very fast- sometimes can beat the laptop. Weight Hardly know it's in my purse. App Availability More than meets what I needs. I've never found that I miss any of the apps some people get through another (similar) product. Design Super easy and convenient to use. Gets a lot of looks too. The keyboard attachment is super easy, and the kickstand allows versatile positioning. Durability Yes, it has been dropped a couple of times. Thankfully, it's just fine. Wouldn't encourage someone to drop any device on purpose.