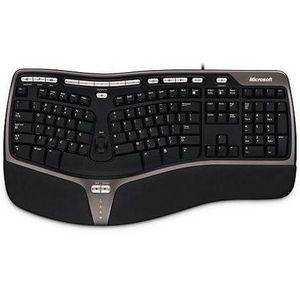 I bought this keyboard for my dad got diagnosed with carpal tunnel. He raved about it so much, I went back and bought one for myself as well. It is the most comfortable keyboard I have ever used! I use the computer a lot because I am an online college student and this keyboard makes it easier to get assignments typed out without my hands hurting afterwards. It also has some extra neat features like 5 programmable hot keys, a numeric keypad, zoom slider in the middle, and dual function keys. The zoom slider in the middle is awesome because it makes it very easy to zoom in or out on images or text. That has come in very handy when studying documents online for tests! All the function keys work great with Microsoft office products which makes my life easier because I am required to turn in all assignments using Microsoft word. Performance It works beautifully. I have not had any of the keys stick or not function the way they are supposed to. Durability It has held up to many hours of being used because someone is always on the computer. Design I love the ergonomic design! Anyone who uses a computer a lot needs this feature not just for comfort, but also because it helps to prevent carpal tunnel syndrome. Comfort This is a very comfortable keyboard to use.

The look of this keyboard is awesome. I thought this would really help with the comfort of typing and help reduce the typos. I was completely wrong. I am one who types a lot and I need that comfort. I was so sore by the first week of using it. My hands being so spread out on that makes it so they were very sore. I had to return and and go with the basic board. Wouldn't recommend for someone who has to type daily.

The Microsoft Natural ergonomic was basically introduced for people with wrist problems/pains like Carpel tunnel syndrome sufferers. Thankfully no one at my home has any wrist problems. My husband got this just because he was impressed by the curved appearance and wanted to try it. The keys are very noisy when typing and soon started becoming less responsive. The keys started fading with little use. So, I would only recommend it for people who truly need the ergonomic design for their wrist problems. I really liked the volume and play/pause control from keyboard which I found to be very convenient.

Due to having multiple sclerosis, I needed an ergonomic option for a work keyboard. I type 60-100 wpm, and after an initial adjustment period, I was able to go even faster on this keyboard. I also love the shortcut keys at the top of the keyboard (favorites, calculator, etc). The angle of it is very comfortable and I experience less numbness in my fingers. Really easy to install. I have had 1 wear out in about 3 years, but I type extremely hard. Performance No lag when entering text (unless due to other system issue) Durability I have had to replace once, but I tend to press buttons very hard. Also keep having the pain on the M key wear off on both keyboards I have owned, no idea why. Design Great angle, very comfortable, the shortcut keys come in very handy. I especially like the favorites button and the calculator shortcut. Comfort Lessens MS symptoms and makes it easier to type all day at work. It does take a bit to get accustomed if this is not a system you have used before, but after a week or so, you will never want to go back.

Overall keyboard is good. But while typing it is bit hard to look for keys as keyboard is divided in to 2 halves. Personally, I dont prefer to use this keyboard for longtime. Always typing will be slowed down. You need to get habituated completely for this kind of keyboard. then it may work for you. Check out before you buy it.

The keyboard is absolutely great. I have weak joints and get repetitive motion injuries very easily. This keyboard is the only thing that allows me to type for 8 hrs a day and still not feel pain. Comfort Once you get used to the "spaceship-like" layout and appearance, you will never go back.

I bought this keyboard to replace the standard one at work because I have issues with tendonitis. While the split key, ergonomic layout works well, the unit itself has too many bugs and issues to give it more than a poor rating. Performance As a basic, ergonomic, split keyboard this works well. The keys are spaced evenly and have adequate distance between both hands when resting on the keyboard. However, after using it for less than a year, the dash key stopped working completely. I get around it by inserting a dash from the number keyboard. The F keys never worked with my computer which makes it pretty useless during troubleshooting. No amount of software updates and compatibility troubleshooting fixed this issue. After two years, it will stop working completely about every three months - and the only fix is to reboot the computer. I'm just waiting for it to die completely before I replace it. Durability While it hasn't given up the ghost yet, it had issues almost from the beginning, which is fine if you want a semi-working keyboard. Design The design layout is satisfactory and is comfortable to type on. Comfort The split keyboard makes keyboarding more comfortable.

This is one of the most ergonomic keyboards you can get -- it's the best of Microsoft's Natural (ergonomic) Keyboards.  Besides the split keyboard that is obvious from the picture on the box, it slopes down from the spacebar to the function keys, not up like most keyboards.  If you have never had a keyboard like this, it takes time to get used to it, but it's worth the effort.  It is very easy on the arms and hands.I had one of the original Microsoft Natural Keyboards, and I loved it.  I cried when they came out with the Elite-series natural keyboards, which had the miniature, plus-shape arrangement of arrow keys and vertically-arranged Insert|Delete|Home|End|Page Up|Page Down keys.  The 4000 keyboard has the classic inverted-T arrow keys and horizontally-oriented Insert, etc. keys, just like the original Natural Keyboard.  It has a lot of bonus keys that do all sorts of things keyboards did not traditionally do (volume control, zoom, calculator pop-up, etc).  My wife loves those extra keys; I don't use them, but they don't get in the way of ordinary keyboard usage, so I don't mind that they are there.I've had this keyboard for a couple of years now, using it almost daily, sometimes 10-12 hours a day (between my wife and I), and all the keys still work perfectly, with no fading or wear-off of the key labels.The only negative thing I can mention is that it is USB-only.  My computer occasionally won't recognize that a keyboard is installed on a USB port when booting up.  Once that happens, I have to plug in a regular keyboard into the computers PS/2 Keyboard port to get the computer to boot.  Once it is booted, it recognizes the USB-keyboard too.  This could be a problem that is specific to my computer, but it is annoying, so I have to mention it.  I solved the problem by salvaging an old spare keyboard to permanently plug into the PS/2 keyboard port.  That keyboard doesn't work very well, but it doesn't matter since it sits under the desk and I never use it.  The computer works fine with both keyboards attached at the same time, and never gives me a "keyboard not found" error when I boot up.Bottom line: I love this keyboard, and I'd buy another in a second if something happened to the one I'm currently using.

Like the name suggests, the keyboard puts your hands in the "natural" position when you type. Quite often my hands hurt at the end of a long day. Ever since I switched to this new keyboard I feel like the strain on my wrists have gone down. It's definitely nice that I can do more work without resting often. I would definitely recommend this keyboard for someone who uses it to work. I would say any office job would benefit from this. Personally I write software for a living, and I think this is even better for programmers! If you, or anyone that you know have wrist pain from typing a lot, you should recommend this keyboard to see if it helps relieve the pain like it did for me. It was definitely a good buy for me!

If you've ever heard anyone lambast ergonomic split-layout keyboards, they don't know how to type properly. Once you've tried this keyboard, you'll never go back to anything else. Even those newfangled "wavy" layouts just don't cut it. Believe me, I've tried buying new keyboards but I always come back to this one. The MS Ergonomic 4000 comes in both wired and wireless variety, whatever suits your fancy. Whatever version you get, just get one. The keyboard comes with a snap on accessory that elevates the bottom edge (user side as opposed to monitor side) so that your typing posture is such that the fingers are at a slightly lower elevation than your palms (edit- guess it would have been easier to say that the keyboard can slope down). MS says it helps with wrist pains and such. I don't know if it actually works or helps, but its always nice to have options. As far as I'm concerned I won't be buying any other models of keyboard. I'll be perpetually rebuying this one.