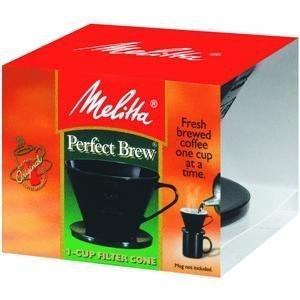 I purchased this coffee brewer because I had trouble with drip brewers becoming "inhabited" when I was on a no-coffee kick. We lived in the woods, and so we always had some kind of insects in our house, including the kitchen, and I would drink coffee daily for a while, then fall out of the habit and store the coffeepot, only to find insects and their body bits in the next pot of coffee I brewed, weeks of months later. So I purchased this product SPECIFICALLY because of its simplicity; nothing could get caught in the works, because there are no works, just a cone (which holds #2 cone filters, which I admit can be hard to find) with a drip hole. I have not had any problem with boiling the water before using it, as one other reviewer mentioned - after all, a regular Mr. Coffee-style coffee pot turns its water to steam, which condenses back into water before flowing through the grounds, which necessitates boiling that water. I also had no trouble with working out how much coffee (dry grounds) to use; I measured my cup and converted that to the six-ounce cups mentioned on the side of any package of coffee, and use a little more than the recommended 1 Tbsp. of grounds per six oz. water, as I like my coffee a little stronger than average. This plastic item is not a toy; there are ceramic versions of it, as well as kettles specifically designed with a narrow spout to enable the user to make precise concentric circles in the filled cone, to wet the grounds "properly". It takes me no more time to make an 18 oz cup of coffee (so I only drink one a day, haha) than it would using the more common drip coffeemakers, and cleaning is almost embarrassingly simple, since you can reach all parts of the cone easily even if washing by hand. Simplicity rules! Safety If you were using a small-diameter cup, such as those with old sets of "grandmother's china", this cone might be more easily toppled over if you were not paying attention. Ease of Cleaning Simplicity rules! Durability I have owned this cone coffee maker over a year and it is just like new. Design The base of this cone has a ring designed to balance on the rim of your cup (or carafe, if you use the larger cone also available from Melitta and other sources), and the ring has edges to help prevent the cne from slipping off. I can't say it enough: simplicity rules!