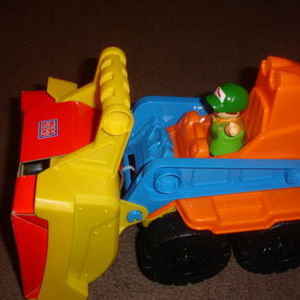 I bought a bag of these mislead by the picture on the bag. I had anticipated that there would be pieces with more "bumps" almost all of the pieces had only one. Considering age group for these was 1-5 that's pretty disappointing because I've never met a 5 yr old who would like to make a large stick of one bump blocks, without the intent of it being imagined a weapon. Very frustrating.

My son has way too many toys and I really didn't think one more "truck" would interest him, plus, where was I going to put it? But, my son has singled this "truck" out as his favorite. He loves using the scoop to lift things up and "drive" the tractor across the floor to deposit the items elsewhere. It really is very durable and very easy to clean, which makes me happy. He has enjoyed this more than many of his more expensive and detailed toys. I like that it is colorful and we can work on learning colors as well as counting the items we "scoop" up. It goes nicely with a lot of the truck and tractor videos that my sons enjoys, so I will attempt to move him away from "tv time" with suggesting that we play with a tractor instead of simply watching one.

I played with legos and other building blocks as well as linkin logs as a child. My children and I spend hours together using the mega blocks, just great toys...they are durable and last for years. Another great toy to pass down to the next generation!

I love Mega Bloks!  My children are 6 and 2 years old and still have the same blocks.  They play with them every day and love to build new things.  I find this brand is very durable and long lasting.  I will continue to use the Mega Blok brand for many years to come.

Half the parts of a box that you buy is way too slack. It's very frustrating : the point of this toy is to erect, construct, and for this, the pieces needs to be more fit together (and yet not too much for the infants to be able to separate them, but this is not the point here). So, we won't buy anymore Megablock for now on. A mother full of compassion for her baby's efforts

I purchased a huge bag of MegaBloks for Christmas - a month ago - for my children and they provided them with hours of fun only now we are down to half a bag - they got lost. Besides getting lost there is nothing else bad I can say about MegaBloks. Children need to develop their motor skills and these provide an excellent tool for hand and finger coordination. They also stimulate the mind and imagination. There is no limit to what your child can build. They provide laughs too - what kids doesn't want to make the tallest building ever only to knock it down and laugh. They are great for counting. Count how many blocks your child can stack. Challenge them to one more. The possibilities are absolutely endless. They are colorful. Use them to teach basic colors. Say "Where is a yellow block". I've done all this with my kids and it helped to prepare them for school. I've purchased 3 bags altogether and when they get lost I purchase another bag. What a great investment!

When looking for building blocks for my one-year old son, I originally decided that I didn't want MegaBloks, because eventually I wanted him to play with Duplos and Legos, and didn't want to have a million sets of blocks in the house!  However, my mother-in-law bought him a small bag of MegaBloks for his birthday and it turns out that he loves them!  The other blocks I had bought him (small wooden blocks and big cardboard blocks) were not quite right for his age, and I wanted him to have something to occupy himself for longer periods of time as he grows into his second year of life.  I was excited to see that he could actually stack the Mega Bloks himself (although he only does one right now).  I bought him a second, larger bag of Mega Bloks so that we could be more creative, and a cute little dump truck with a driver, that he loves.  The blocks come in four primary colors...yellow, red, green, blue (actually 2 shades of yellow between the two bags I have), and 7-8 sizes.  The only thing I don't like is there aren't many things you can build besides towers, forts, bridges, etc.  And, there aren't accessories that come with them...it would be nice to have animals or people or something.  But, all in all, they are great and my son loves them.

We recently purchased the MegaBloks Maxi Tub 140-piece block set for our daughter's first set of blocks.  The blocks came in a large tub for easy storage.  the tub also makes cleaning up the blocks easier.  My daughter enjoys clean-up time and putting all the blocks back in the tub, almost as much as she enjoys building with these. There are a good variety of blocks in lots of different shapes so you have endless building options.  I also love that they primary colors, which we are working on learning now.  These block are the perfect size for small hands.  They are easy to stack together and she has enjoyed building many towers, just to watch them fall down.  These blocks seem to be very sturdy.  She has knocked down many towers and we haven't had any problems with any of the plastic chipping or breaking.  140 pieces is a good amount of blocks for our one-year old.  As she gets older, we will probably add to this set.  I would highly recommend the MegaBloks MaxiTub 140 piece set for a beginners set of blocks.

The large sized Mega Bloks are an awesome open ended toy.  By open ended, I mean a creative, multi purpose toy, that can be used over and over again, never in the same way twice. My grand nephew is just beginning to show an interest in the 100 piece toybox set I purchased for him.  He is beginning to stack the blocks, and put them together.  He is starting to categorize them into shapes and colors. Not only that, but they are big enough so that when he puts them in his mouth while teething, there is little fear of a choking hazard. I enjoy the fact that the Mega Bloks are not just another "push the little button and make it go" toy.  My grand nephew develops his problem solving skills by trying to determine at what angle he should build, to avoid the blocks falling over.  He also enjoys putting all the red and blue blocks in the same pile (though he doesn't know yet the colors are called "red" and "blue". The definitive selling point for me was that the blocks came in their own toybox!  I loved that!

Both my three year old daughter and one year old son love their Mega Blocks.  They are an universal toys that can be used for children at most any age from 6 months and up.  My daughter originally received the Mega Blocks as a gift and they have withstood her use and abuse and now my son is playing with them.  After a quick Google search online you can find different animals and things you can build with the blocks which is extra fun.  We make castles, buildings, dogs and more, all with some colorful plastic blocks.  You can use them many different ways to teach colors, numbers and shapes to your children.  I think it's nice to use simple toys as kids are too often bombarded by loud noisy toys.  These block allow them to use their imagination and play.   You can purchase additional blocks in multiple colors, all which work within the Mega blocks line.  You can also get dumptrucks and wagons that are made by the same brand to store your blocks.  We recommend Mega Blocks!!