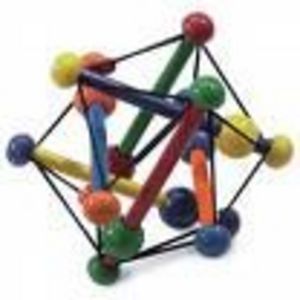 We got this as a gift before Emily was even born, and she's been playing with it happily ever since! It's squishy, and can also be used as a pseudo-rattle, because the moveable beads make noise when you shake it. I also like that Emily can chew on the wooden beads, and the paint does not chip or flake. It's easily portable, and she loves it!

I am a occupational therapist for children with developmental and other disabilities.  I love this toy because there is nothing electronic about it, which seems to be so rare these days.  I have a two year old, but I also work with several babies who have trouble holding anything in their hands independently.  But, they can all hold this!  Once they get it in their hands, they love to shake it because it makes nice, calm "tinkeling" sounds.  I will be getting one for baby number two of my own next year, for sure!

I recieved this from my M-I-L that works for Manhattan toys.  my child loves it and so do the parents of other children that come over.  I ordered extra and gave them to many of the local day cares here.  They are fun, safe and easy to take anywhere.  Quiet, safe and engages a child for long peiods of time.

This is just an all around great toy. My 8 month old Loves it, always has, super easy for his teeny fingers to grab ahold of. Also the round knobs are easy to chew on when teething. That being said, my 6 year old loves to grab it and shake it, twist it, flatten it out, etc. Its just a great fun flexible little toy. You'll Love It!

I found this toy several years ago and first used in my office.  As a counselor, I found that all of my clients, of all ages, would always pick it up and play with it and it seemed that they would open up more during each session.  My kids also loved it and could spend hours using their imagination with it.  Great toy.

We were given the skwish toy from Manhatten Toys as a gift for our baby and he loves it. It is made of wood beads and black elastic cord, it is colorful and great for sensory exploration. Very sproingy! Pro: he plays with it by using his hands by pulling and pinching, helps develop skills. It doesn't leave marks when dropped, it bounces nicely. It is a quiet toy and seems of good quality. Con: he likes to mouth it too, which makes me nervous with the little beads and chord, with the painted wood (I worry since all the recalls on toys last year for toxic paint issues). So I restrict his play on this to only when I am right beside him since I don't allow him to put it in his mouth. It works wonders to quiet him when he is fussy! We have several other toys by Manhatten Toys and all of them have withstood years of heavy use by all of our kids (and even our dog!) Very creative and fun stuff!

We were given this toy before our son was born, and I was amused at how everyone who saw it couldn't resist picking it up and playing with it... squishing it, rattling the balls, and twisting it around.  I think this toy is almost as appealing to teenagers as it is to toddlers! ;) It is fantastic for little hands as it isn't heavy or bulky.  It is brightly (but not glaringly) colored, and made of wood (which I love, as I am a bg fan of wooden toys) and elastic cord.  It has been a big hit with both of my kiddos and has stood up extremely well to all the playing it's had. The balls slide easily on the wooden dowels, and make a light rattling sound when the toy is shaken, which my son loved.  He also discoverd it bounces when thrown!  Great for little ones to discover cause and effect with - it can be squished, thrown, and shaken and each thing teaches them a bit more. I have been pleasantly surprised that none of the paint has chipped or been damaged by play.  After two years of use this toy still looks nearly new.  I would much rather pay a little more for a high quality toy that lasts, like this one, than a cheap one that will break or look worn out quickly.

This is HANDS DOWN my 6 month old twin boys favorite toy.  I really need to buy another becuase they like to grab it back and forth from each other.  They never seem to tire of the intricate beaded belled system and the design of it means that when they drop it its really easy for them to pick back up and less mommy picking it up time is spent which is always a good thing for busy moms and dads!!  it is brightly colored and makes a nice pleasant noise too as not to be annoying. i really can think of no downsides to this product.  Its gone through 5 of my children and is still in perfect shape.  even the big kids enjoy squishing it up and letting it bounce back. I prefer to buy wooden toys and avoid plastics when possible and toys like this are rare and far between.  i definately think that this is the very best baby toy out there and would choose this alone if i had no other opportunity to buy a toy. its just THAT good!

Let me start by saying that the Skwish is an awesome toy for a baby: it's high contrast, colorful, has several textures in the bungee cords and the wooden parts, it's safe, flexible, has movable beads, has a musical sound when played with (non-electronic, it's just the beads moving and the cords twanging), and at the very least is a very cool polyhedral rattle.  When adult friends are over, they can't keep their hands off this toy, they treat it like it's some sort of table puzzle or executive desk accessory.  My baby, on the other hand, never showed much interest in it.  Now that she's a toddler, her sole interest in the toy is to carry it around between her teeth by one of the knobs.  I don't get it, it had terrific potential, and yet it never went anywhere.  Given it to do over again, I probably wouldn't have bothered with this toy, it's a classic example of designing something that's perfect on paper and yet fails to accomplish its sole purpose: entertain a child.  I'm afraid it wasn't a case of having so many toys that this one just fell through the cracks, either.  We didn't get many toys for the baby year, although we let her play with anything and everything that was safe.  She prefers acorns, sticks, and leaves, with the occasional fruit or vegetable. We'll give it another try with the next baby, but it'll be in perfect condition for a hand-me-down to someone else if they react the same way our toddler did.

This is a wonderful learning toy.  My son enjoys playing with this and is fascinated all the time by playing with it.  I would reccomend this toy to just about any mom or dad who wants a super smart child.   I love this toy.  It is great and I would buy a houseful if my husband would let me.