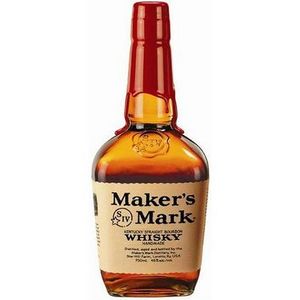 Makers Mark is pretty good. It's not my favorite bourbon, but it does have a decent flavor and mixes well. It's great with ginger ale or cola. I like to add a bit of cranberry juice to a Maker's Mark and ginger ale cocktail during the holidays. It has a very "festive" but simple taste.

Maker's Mark Kentucky Straight Bourbon has always been one of my favorite bourbons. This is one smooth sipping drink. You do not have to mix it with anything because on the rocks is just fine. I was introduced to Maker's Mark a few years ago and drink it on the occasional.

Makers Mark has a long and traditional history . It is best known as the strong one, due to the high proofing of its alcohol in comparison to the industry standard. This bodes well for anyone looking for an extra bang for their buck at the bar while still caring about the taste!

Maker's Mark is awesome.  If you go on their website you can join their team and they actually put your name on a cask of bourbon.  they send your a birth certificate for your cask and notify you of its aging process and status and will send you a maturity letter which allows you to purchase bottles from the cask before it goes to market.  They even send out Christmas gifts and birthday gifts and just because gifts - they are the best.

I like spirits/wines that are cheap but very well worth the trip to the store. this whisky has been a very close friend of mine on many occassions, was by my side for the good and the bad. I am a social drinker but, I have had days that i needed to be alone with "red label johnny". This is the kind of whiskey that you don't have to pay a pricey fee to get the best results. I have had freiends say " oh that's the cheap stuff" or "that's not going to do it for me I need something stronger" it took a little convincing but I have had a few over to my house and yes I introduced them to Johnny and they after only two drinks they were  not feeling any pain. about a week ago for my weekend date  i seen two of my social buddies getting  better aquainted with "johnnny'. This a very smooth drink to swallow it goes good with everything and everybody. I have used " red label walker in a few of my grill recipes. this is one to try. get about 8-9 large peeled shrimp seasoned with  garlic, butter and lemon rinds, put in a foil boat  and dash with " red label wlaker just before grilling, PEERFEECTT.

Makers Mark is the smoothest whiskey around. I'm an avid drinker- mostly wine, beer and vodka would be my spirit of choice. My mother-in-law introduced me to Makers Mark. She mixed it with Ginger Ale and I was hooked. It is so smooth and silky and tastes delicious. I went on the Makers Mark website a few years ago just because I thought the red melted wax on the bottle was so cool and wanted to see if there was a story behind it. Well, I was very surprised, it's a great website. They also have a Makers Mark Ambassador Club. When you sign up, they name a barrel of whiskey after you. After 20 years (I have quite a while to wait yet), they will tell you when it's ready and you get a bottle from the barrel. Pretty cool. Also, if you go to their distillery, you can find the barrel that has your name on it. If that wasn't cool enough, they also send you Christmas presents every year. I've received great Makers Mark gift bags, Makers Mark wrapping paper, gift cards and ribbon, golf balls, red wax and a Makers Mark stamp and a few other high quality gifts. Did I mention that it is free to join? So, not only is it the best whiskey sold but it also is very good to it's customers.

Both my husband and I love Maker's Mark - after sampling at least a dozen domestic & import whiskeys/bourbons, we have both agreed that none can stand up against the MM!!!  Very smooth and full bodied with a caramel undertone...makes one delicious whiskey sour!

Beer is and will always be my beverage of choice. Nothing hits the spot like a malty beverage with just the right amount of hops to inspire and tantalize the mind and senses. But I will partake in the hard stuff every now and then and when I do, there are some types of liquor that I almost always favor over others. My number one hard liquor of choice is whiskey and one very tasty brand of whisky is **Maker's Mark Whisky**, a popular bourbon distilled in Kentucky. **Whisky Commentary:** Pouring Maker's Mark Whisky into a clear glass shows that it's golden tan in color and it produces a complex aroma that is alcoholic, woody, and a little smoky. The taste basically follows suit, with a smooth flavor that combines smoked malt, wheat, and other grains. There is also a certain woody character to this whisky along with caramel, toffee, and a little bit of peat. There is even a touch of vanilla in the background, and it becomes more noticeable in the aftertaste. The list of ingredients includes wheat, corn, and malted barley- similar to the ingredients used in beer- and the final product is 90 proof, making it 45 percent alcohol by volume.  Maker's Mark Whisky is a sour- mash, double- distilled whisky with a flavor and smoothness that reminds me of some brands of scotch. The smoky notes and the grains are what give Maker's Mark its unique taste. As I slowly sip on a small glass of Maker's Mark, I like to pay attention to the different taste qualities present and identify the many complexities that make this such a fine bourbon whisky. The emphasis on the grains, smoky character, caramel, etc., are similar to other whisky, but Maker's Mark combines them together just right, creating a balanced yet distinct taste. Maker's Mark is certainly alcoholic in taste, but it is smoother than many other whisky products and less bitter. Part of the reason the taste is less harsh is the absence of rye. Maker's Mark relies instead on Winter wheat, corn, and barley for its main ingredients and they combine together to create a whisky that isn't as harsh as many others while still maintaining its full, rich taste. Some whisky products are good for mixing while others are better for shots. The nice thing about Maker's Mark is that it tastes great either way. Life doesn't get much better than a Manhattan made with Maker's Mark whisky. It is also very tasty in simpler drinks, like Maker's Mark and Coke or Maker's Mark and ginger ale. In fact, if I am going to have a mixed drink with Maker's Mark, I try to stick with the simpler drinks. That way, I can still enjoy the flavor contributions from the whisky. **Bottom Line Viewpoint:** Overall, Maker's Mark Whisky is a great tasting bourbon from the state of Kentucky. It is priced quite a bit higher than the more popular priced bourbons and whiskies, so it tends to be cost- prohibitive for those who just want to taste some basic whisky and are not concerned with higher quality. If a simple whisky fix is all you want, then spend your money on something else. But if the taste of a finely made whisky is what you crave, then Maker's Mark should rank high on your list of possible purchases. The grainy, smoky flavor and the complex tastes make this a whisky to enjoy, one delicious sip at a time.

As you drive over the last hill and enter the valley in which the distillery is located your every sense is filled with the wonderful aroma of Maker's Mark. The bottle alone is remarkable with it's red wax cap. The color of the bourbon is that of a rich caramel. The taste is that of a liquid caramel with a nice alcohol bite. I would recommend this bourbon to both a seasoned bourbon drinker and those of you looking for a taste revelation in the bourbon category.