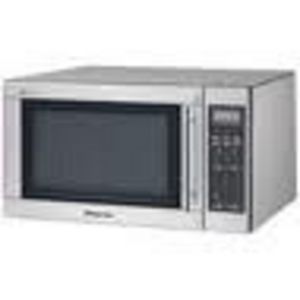 Unlike earlier Magic Chef models, this one does not allow you to program two separate cooking times at separate powers and then leave. That is an inconvenience but certainly not the worst thing about this item. When programming the power, you have to punch the power button repeatedly until you reach the power that you want (another inconvenience), and then you punch in the number of minutes and seconds that you want it to cook at that power. Unfortunately, if you make a mistake, you have to start all over. Of course, if you forget to reset the power when starting over, it defaults to high. So, if for example, you want to cook something for 50 minutes at 20% power here is what you must do: (1) Press the power button eight times (each press reduces power by 10%). (2) Punch in 5 0 0 0 (50:00). (3) Press start. This is not that hard but if you accidentally press zero one extra time, the time becomes zero again. But what's worse is if you accidently press, e.g. 8 instead of 5, and don't notice it until after you've pressed start. Now you'll want to stop/clear, then reset the power and reset the time, and press start again. If, as is the case with many people who use microwaves, you have other things on your mind you might forget to reset the power, and end up cooking your food at high power for 50 minutes. It has happened to me a couple of times already. So now you're thinking, I'll just get into the habit of checking the power level right after I press start. Well, **you can't**. Once you've started programming in the cooking time, you no longer have access to the power level; which means you can't change it, either, so experimenting with levels becomes very difficult. Then there is the timer, one of the most important tools in cooking any meal; a beep will tell you exactly when, for example to take that sauce off of the stove and stir it into your dish that you plan to microwave. Unfortunately, if you've made the mistake of opening the microwave door after you started the timer, the time will have stopped cold. You can start it again by pressing start after you've closed the microwave door again, just as soon as you realize that you've stopped it, which is usually about the same time that you smell something burning and wonder why the timer hasn't beeped yet. Once you get used to these risks and inconveniences, its a good oven as long as you don't occasionally forget that the risks exist, which, of course, most humans are bound to do.

My husband and I were given this microwave by a friend. It had already been used, but apparently it still had (and has) a lot of life left in it. It works really well. It heats food very quickly and very thoroughly also. It has extra features that are nice such as multiple defrost settings for different foods. It also comes with many standard features and buttons such as "popcorn". I also like the size of it. I can fit almost any size dish that I would regularly use into it. The microwave is also very easy to clean even when there is dry food splatters caked on from who knows when. The glass turntable comes out to make for easy cleaning in the dishwasher or by hand. I use it at least once a day to help me with my meal preparation. I don't know how I would survive without it.

The Magic Chef Microwave is simple to use.  All modern and anyone can use it.  You don't have to worry about setting a timer and not being sure how long the timer really is set for, and don't worry about trying to figure out how long you need to "defrost a chicken" since there's a button for that.       If you are looking for a simple and easy to use microwave, which is stylish in either  modern or "old-fashion" home, the Magic Chef Microwave MCD1611ST was made for you.  Don't worry about the machine not fitting in with the rest of the decor, since the stainless steel goes with all.

The Ease of Using A Magic Chef Microwave         I like this Magic Chef Microwave because it is much easier to use than many of the other brands that I looked at. This Magic Chef Microwave works much better than the one I had before. It is much larger and has a rotating tray. I like the rotating tray better because I feel that it helps cook the food more evenly. It has more buttons to make more options so that I can just hit one button to warm a beverage, to make popcorn or to warm up leftovers. You can defrost foods with this microwave and it has a button for the different types of food, such as meat, fish or poultry. it has buttons for different types of vegetables, as fresh or frozen.      On a personal note my grandson likes to make things himself and he can use this microwave with no problems. He is 7 years old and very independent so when he want to fix him a snack in the microwave he knows how to do it with no help.