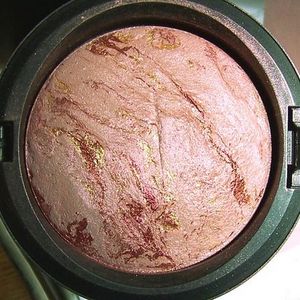 This is a great pink skinfinsh that I have actually been using as a blush more than a highlighter.  It's a lovely shade of pink that is neither to warm nor too cool, with bronze/gold and raspberry veining.  It's similar to porcelin pink but rosier and more pigmented.  The packaging is the same for all MAC MSF's and I have never had a problem with them but I have heard that the powders themselves can break easily.  I don't find it too shimmery but someone who like a really matte look might not love this product.  No chunkiness or glitter though, gives you a healthy pink glow.  This is a limited edition item that was recently rerelased, once they're sold out you never know when they will be available again.  I would recommned this to everyone and suggest you go out and get it if it's still available.

Of all of the products in my makeup kit, MINERALIZED SKINFINISHES are the MOST important thing that I own.  If I could only use ONE product on a daily basis, I would choose Mineralized Skinifinish in various colors.THAT says a lot about a product right there.The problem with MAC is that they only release Mineralized skinfinishes on a very limited basis.  They often release them for a short while and then the color might not show up again for a very long time- if ever.Mineralized skinfinish has one of the largest followings of any MAC product out there, and there is a reason for that. **WHAT IS MINERALIZED SKINFINISH?**Minearlized skinfinish is a diffusing product that you apply to your face.  If you ever watch old movies - many of the stars with freckles or other skin imperfections would have the camera use a blurry lens to diffuse their faces and make them look perfect.Generally they are mutlipurpose. You can use them on your body, your face, your lips, and even your eyes - especially if used with a wet brush.Mineralized skinfinish will do the same thing for your skin, but there are some tricks to using them.The skinfinish that I am speaking of in this review was just released once again in the SHEER MINERALS COLLECTION from MAC this past weekend.  Petticoat is a rose pink color with gold and bronze veining in it.  This color is most useful as a blush, blush highlighter, or an eyeshadow. **HOW TO USE PETTICOAT MINERALIZED SKINFINISH**The first most important trick to using MAC Mineralized skinfinish is to obtain what is often referred to as a *skunk* brush.  The skunk brush is a black and white brush with two types of bristles in two different lengths.  It disperses the product more like stars in the sky vs, the typical brush which is like using a crayon to color things in.Petticoat is best used lightly with the skunk brush (I use [MAC 187][1] which is the one I like best) in circular motion on the cheeks.  I like to use PETTICOAT MINERALIZED SKINFINISH as a highlighter over regular darker blush.Another key to using Petticoat Mineralized skinfinish is to load up the brush very lightly and then slowly build up until you have the effect you want.  It is easier than putting on too much at once.**OTHER USES FOR PETTICOAT MINERALIZED SKINFINISH**Petticoat mineralized skinfinish can also be used mixed into gloss for the lips, dry on the lips with gloss over it, or with a wet brush on the eyelids OVER a nice eye base.Petticoat used wet is best used if you scrape a tiny bit into the lid or another place and then use the damp/wet brush to mix it there.  It is a lovely intense or wash effect used this way.**COMMENTS**I use Mineralized skinfinishes all of the time.  Petticoat has a bit of glitter in it from the veins that run through it, which some people don't like.  However, careful application will still give you a nice soft effect without too much problem.If I apply very lightly with the 187 brush, I find that the effect is truly lovely.If you have very oily skin, you might not do well with Mineralized skinfinish.  The particles might form a very shiny coating on your skin making you look too shiny and metallic.  I recommend never using it over oily skin without foundation ,powder or something over your skin first that will control the oil.You can find Petticoat Mineralized skinfinish at MAC counters, stores, and online at www.maccosmetics.comIf you have the patience to learn how to use it well, Petticoat mineralized skinfinish can be one of the nicest pieces of makeup that you own.Like I said, if I could have nothing else but an entire collection of Mineralized skinfinishes, I would be fine- although missing bright colors, I would be content.**** **PHOTOS** I am including some photos with this review- of intense swatches of Mineralized skinfinish so you can see what they look like colorwise.  If you apply to the skin lightly like you are supposed to, you will not see the intensity like the swatches.I just can not get the camera to pick them up without putting up intense swatches. **** **EDIT** Recently (Jully 2010) MAC re-released Petticoat Mineralized Skinfinish, along with [Stereo Rose Mineralized Skinfinish][2] which caused quite a stir.  The newer Petticoat Mineralized Skinfinish that I was able to swatch was much darker than the Petticoat that I have.  The re-released [Stereo Rose Mineralized Skinfinish][3] was the same color as the original release. [1]: http://www.viewpoints.com/MAC-187-Duo-Fiber-Face-Brush-review-10d56 [2]: http://www.viewpoints.com/reviews/MAC-Stereo-Rose-Mineralized-Skinfinish-review-134c8 [3]: http://www.viewpoints.com/reviews/MAC-Stereo-Rose-Mineralized-Skinfinish-review-134c8

Okay, so we all love MAC. I was excited that they launched a mineral line too! I bought this MAC eye shadow product in order to give me a nice finsih over foundation or just to use on days when I do not want to go all out with my make up. The product does offer a nice glow, but no coverage for redness or uneveness. It cannot be used as a substitute for foundation. It is still a decent product, i just wanted it to do something that it could not. It is also very expensive, but it is good that they have a mineral line for people concerned with the harmful effects of other make up. If you want a rosy or glowy complexion and have the money, than buy the product. If you are looking for something with decent coverage, do not buy this product because i guess it is not intended to do that. However I still love MAC and will continue to buy their wonderful products! Hopefully I can try more of the mineral line too!

This is the blush/highlighter I go to when I have not idea what I want to wear with my eyeshadow color.  It just brings you that instant awaken glow to any color outfit or color makeup you already have on.  I love this a lot more than Northern light as it is much more finely-milled.

Sad to say, this shade is one that went back. Actually, it went back in exchange for "So ceylon". I already have some powders like it, so I could not bare to keep it. A good substitute was limited edition. N.Y.C Chroma face powder in "Moonstone". This shows up on skin as a shimmery raspberry pink. If you are lucky enough, you might find some gold in this powder. I give it a 5 star rating based on the texture and color payoff. All MSF's need a skunk brush to work with them.