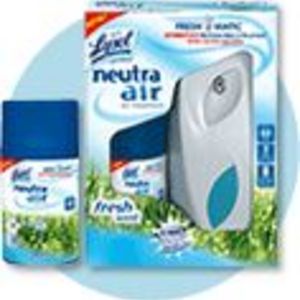 I am the type of person who wants their house always smelling good. I hate having the smell of my cooking filling up the entire house. I also dislike the smell of the bathroom after it has been used, especially in the winter when we can not open up the window. I bought Lysol Neutra Air Freshmatic because my kids sometimes forget to spray air freshener when they are done with the bathroom. I put this right above the door so it can be smelled as soon as you step foot in the bathroom. It works perfect in the bathroom because it is not such a large room. I have the choice to set it to spray every 9, 18, or 36 minutes. It keeps the bathroom smelling fresh and clean all the time. Now for the larger rooms, one of the Lysol Neutra Air Freshmatic is just not enough so I put two. I have a large living room that is next to the kitchen so it is constantly smelling like food, but after I put the Lysol Neutra Air Freshmatic it no longer smells like food. It smells like fresh air. The machine itself is not expensive, but the refills are a bit overpriced. They do last a while however so it is worth the price paid.

These Lysol Neutra Air Fresheners work, but by far are not the best. I would prefer another Air Fresherner, but these Lysol sprays work too. There isn't much of a variety, and they don't smell the best amazing, but they do eliminate the odor. The smell also doesn't last for very long.

I have two of the Lysol Neutra Air dispensers. These are great for keeping consistent freshness in a room. The refills are not very expensive and last for a long time. I have mine set to spray every 36 minutes so mine last quite a while. I would like to see a wider variety of scents but this could be the limitations of the store I shop at since I am from a very small town. I have a cat and a teenage son in a small place and neutra air handles all of the odors that come along with that.

I like the smell of this product. The problem is that it doesn't really cover up any odors. I still smell the odor mixed in with the spray. I sprayed this to cover up litter box odors. I use it now just to make the air smell good in my living room. I stopped using it to try to cover up any bad smells.

I LOVE this product!! I have never liked an air freshener this much!! At regular intervals, which you set, the product is automatically dispensed so that the area smells great all the time. Also, the scents are fresh, not flowery or overwhelming. I have allergies so I can attest that this product is good! The refills are long lasting and YOU control the frequency of dispensation!!

I bought this thinking I would use it in some areas of the house that tend to need neutrolized. I ended up with the lavendar version.It is way to strong and overpowering, making me feel ill.I am still considering getting a replacement cartridge in a different fragrence to see if that is any better, but as is, it sits in my house unused.

With two dogs and a household that is frequently inhabited by multiple infant children at once, I am constantly looking for ways to clear the air and make it smell fresh and clean. And one spray that I use quite frequently is **Lysol Neutra Air**, a product from one of America's most trusted companies. **Air Freshener Commentary:** Lysol Neutra Air is sold in 10 oz (283 g) aerosol cans and comes in three scents: Citrus, Fresh, and Sparkling Water. The operation of this spray air freshener is simple. After shaking well, all it takes is one press of the button/tab on top of the can and the air freshener is released into the air. The nozzle is built into the top and is right in front of the button/tab. The spray is released vertically, straight out of the top of the can as you press. This product works by neutralizing the particles in the air that cause odors. By neutralizing, the particles are effectively eliminated for good. They cannot come back once exposed to Lysol Neutra Air. Its powerful formula wipes out tough odors like those caused by smoke, pets, and other common household items and functions. What makes Neutra Air better than most other air fresheners is the way it knocks out odors. I have used other sprays, like regular Glade, Airwick, and a few others. These sprays are ok for mild odors but they completely fail when it comes to the really tough odors, like those caused by pets, smelly bathrooms, diapers, and other problem areas. Other sprays just can't seem to muster up the strength to wipe out these stronger odors. The reason is because most of these less expensive sprays do nothing to eliminate the odors. All they do is mask them; attempting to overpower a bad smell with a more pleasant one. But Neutra Air is different. Its formula grabs hold of the microscopic particles that cause odors and actually breaks them down into other compounds, effectively "killing" the odor for good. You can tell the difference when you use this product. Just a few pumps of the spray and, provided you have covered the affected airspace, there will no trace whatsoever of the bad smell. Neutra Air is an excellent product and it comes in three scents. I prefer citrus scent over the others, but they all have their own, uniquely pleasant smell. The best thing to do, if you are considering buying a bottle, is to go to the store and sample a little bit of each. Everyone will have his/her own favorite. Neutra Air is environmentally friendly and Lysol manufactures it completely free from any chlorofluorocarbons (CFC's) and free from any other ingredient that could harm the Earth's atmosphere. The can is made from steel with a plastic top and, in keeping with its environmentally responsible mission, Lysol recommend that you recycle the can when finished. **Bottom Line Viewpoint:** Overall, this is an excellent product from the people at Lysol and its one I highly recommend. It wipes out odors *completely*, eliminating any chance of them coming back. It is a constant companion in my household and a necessary weapon against the strong smells of diapers and doggie accidents. It costs a little more, yes. But it is worth every penny.

Lysol products are wonderful products. Occasionally, I buy one that does not perform as I think it should. This Lysol "neutra air" states that it "neutralizes" odors in the air from odor causing bacteria. Maybe it does, but it has a smell all its own that is not very pleasant. In Lysol's defense, I must add that any type of smell mostly will bother me so I try to stay away from anything scented. It would be my desire that I could purchase this spray in an "unscented" line. This particular Lysol scent bothers my husband as well and he has asked me not to use it. He has asthma and some smells are harder than others for him to tolerate. I believe I will stay with the Lysol cleaning products that produce a fresh, clean smell without it being overpowering. Consumers that do not have an aversion or sensitivity to smells may find this product to be refreshing and not offensive at all. I would still recommend it because it is Lysol.

Our dogs love hanging around downstairs in our basement.  After we moved into our new house I began to smell them down there and I decided we needed to keep it clean.  I put in the freshmatic until we could find a better solution.  It is great.  I use the lavendar scent and it really does keep the entire room smelling fresh.  I did have a tough time finding the right scent though and I went through a few variations until i found the one for us.  The room now smells great after workouts, during warm summer days, and of course after the dogs have come in from the rain or a bath.  The best thing about this product it is safe because it has no flame and it is very affordable.  I can always find coupons in the paper for this product and i can usually match it to sales either at a local drug store or Target.  You can easily find refills and I have never had problems with the canister.  Basically I would suggest it because it is a dependable and affordable home product.

I love the fast acting odor destorying power of Neutra Air. The scent is overwhelming as with alot of aerosal air freshers. It's fresh and clean like a spring afternoon. I also like the it kills germs and the flu virus.