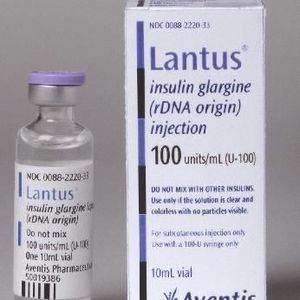 I have been taking Lantus for overnight and day coverage for about five years. I take 30 units twice a day, about twelve hours apart. It made a huge difference in my blood sugar and helped with spikes. Some diabetics won't need to take this even if they are taking an insulin like NovoLog with meals or on a sliding scale. I use the vial and syringe method but it is also available in pen format. This is something that is better for those with vision problems or for those who do not like to measure out their doses. Most doctors will prescribe this for patients who have spikes with their blood sugar levels through the day or wake up in the morning with high numbers. If that is the case you might only have to take 20 to 25 units before you go to bed. There are times when I forget to take this every twelve hours but as long as I remember to take it ever 16 hours I don't see huge spikes, if the gap stretches out longer than that then I see my numbers creep into the 200 range where my normal is 120 or lower. One of the biggest things to remember when taking this is that you have to give your body time to adjust to it. If your numbers aren't going lower when you test your blood sugar, don't give up on it because you are going to end up with the nasty side effects of diabetes like numbness and event neuropathy in your toes and feet, kidney issues and vision problems.

Great product. I use this every night and it works wonders. Even when it has been opened for longer than four weeks, it is still 90% effective. Only complaint with it is that when it is injected into either arm it does sting a little bit. Nothing really to worry about, it only lasts a few seconds. Highly recommended

My husband had been on Novolin N 100 unit insulin for 15 years, and his doctor suggested he try Lantus insulin. We went to the drugstore, had the script filled, and returned with 2 bottles. Instead of taking 20 units in the morning, and 20 units at night, with the Novolin, he was to only take 22 units at bedtime. This is supposed to be a long acting insulin, that is why, he would only need to take it once a day. My husband's sugar readings were 300, and 400, whereas on the other medication he remained in the 75-125, which is normal. I made him stay on the Lantus for 4 days, and his sugar stayed 'off the wall'. We phoned his doctor and told her that he was going back on Novolin. We had tried the Lantus and it hadn't worked for him. In the past month he was had perfect sugar readings apart from one or two days. Such a shame to have to throw 2 bottles away, as it is so expensive.

I have stopped using Lantus due to packaging you are not allowed to purchase a one month supply you are forced to purchase multipul months. If you need one pen per month you must pay five copays making the total cost to the consumer much higher. I am sure the insurance industry has pushed for this to decrease their coverage cost and forcing it onto the insured. One box may retail for 200.00 retail and with you paying multipul copays the insurance picks up the rest so if one box is a 3 month supply you pay 90.00 the insurance pays 110.00 lowering their cost.

I recently was diagnosed with Type I diabetes mellitus (less than 6 months ago). My dad is also a Type I diabetic so I was already fairly familiar with the disease but I quickly realized I had a lot more to learn when I was diagnosed myself. My doctor immediately described Lantus, a long acting insulin. This insulin lasts for 24 hours and helps maintain your basal insulin amount. I started off with a pretty low dosage amount (only 6 units) and my doctor had me calling into the office once a week with updates on my sugar levels. I struggled a bit at first because this small dose wasn't enough. He slowly increased my dosage every 2 weeks until I finally hit the level that I needed. Now my diabetes is under much better control becuase of this great medicine. Lantus has helped me achieve very steady glucose levels throughout the entire day. I no longer have to deal with the wide swings of highs and lows like I did when I first started on the medication. I highly recommend the Lantus pen if you can afford it. Most insurance companies will cover a good chunk of the cost but it is still more expensive than regular vials of Lantus that are administered with a syringe. The Lantus pen is incredibly convenient and I can dose anywhere with no problems. I don't have to worry about dropping and breaking my vials anymore and the needle is just a short cap that twists onto the top. I love my Lantus!

I have been using Lantus for the last 5 years and it is on of the best insulins out there.  I take it twice a day and it helps me regulate my blood sugars.  I would recomend this to every one with type 1 diabetes.  the best way to use this is by taking it twice per day.  Talk to your doctor about the benefits ofLantus because there are side effects just like using ant diabetic medicine.  It can cause low blood sugars and you need to monitor your sugar levels. Lantus has been helpful in helping me keep my blood sugars under better control than what I could be.  My sugars are still not the best but I use novolin insulin to help keep me under control during the day between doses of Lantus.  With out the Lantus I would not be as under control as I am.  I feel that It is a good idea for most diabetics to take this insulin than not take it.  I hope that every one that reads this finds that this is at least a little bit helpful.

I am a mom of two diabetic boys both that have taken Lantus. My eldest was on Lantus for a year and my youngest for 24 hours only. Lantus is a long lasting (24 hour) insulin than once injected is in your body for 24 hours. Sort of seems redundant to say that but insulin can kill you if you are not careful. While my oldest was on it I was always in a panic, scared he would get too much since he was only 3 and on such a tiny amount. Lantus helped his diabetes & kept him alive but as soon as his doctor allowed it, we moved over to an insulin pump. I hae no problems with Lantus & it works amazingly well for most people but for little ones I would avoid it. Our pediatric endocrinologist refused to keep my youngest on it for more than 24 hours because he was 12 months old & very tiny when diagnosed. His dose of Lantus was just too tiny to give unless diluted. Too much margin of error there so he got a pump the day after his diagnosis. All in all Lantus is a great medication if you are older.

I have been diabetic for over 25 years.  I have only been on Lantus Insulin for about 2 years.  I take two shots of 40 units twice a day.  I never thought I could give myself a shot, but after giving it a try in my doctor's office, I found it was very easy and did not even feel it.  The trick is to pinch the skin and slowly go in at an angle.  Honestly I do not feel it most of the time. Lantus keeps my blood sugar around 95 - 107, but you must be sure and use it at the same time each day and do not skip doses.  But the major thing that keeps my blood sugar down is staying true to my diet.  You must eat a low carb diet.  My doctor recommended South Beach Diet but I could not get a copy of it without having to pay.  I chose Dr. Atkins and increase the carbs just slightly.  Mostly stay away or limit starches and breads. All diabetic medicines, whether insulin or pills, will not keep your sugar level low unless you eat right.

Lilly - Lantus Insulin - Do you know that most insulin "peaks" after a certain amount of time? Humulin R, Novolin R, Novolog, etc, all these have peaks after about two to four or four to six hours. What if your sugar is very high and needs to come down? What do you do? Wait until the peak happens, and bingo - your sugar drops....................Well. This event is less likely to happen with Lantus. Because it never peaks. It stays with you for the day roughly 23 to 24 hours and because it's insulin, you never feel like you don't have any in  you. You do. Lantus is available by prescription and also in some cases is available without cost through a paid service(membership required) SCBN - Also through Sanofi Aventis which runs a patient assistance program making it available to those who can't afford the nearly astronomical cost of this medication. Your doctor knows more and can assist you in getting it also. In closing, Lantus can literally help you to control  your diabetes. And make living with it, bearable.

I hate being diabetic, but with Lantas injectable insulin, it helps keep blood sugars in better control.  I do not feel that it works for 24 hours like it is supposed to do, but for 12 hours, my blood glucose levels are good.  I think that if the dose was split into two shots instead of one, it would help keep the sugar levels at a more even level.  The dose is supposed to be administered in the evening at bedtime. My levels are high when I take it, but low when I wake up in the morning.  Together with a fast acting insulin at each meal, Lantas could help you stay in better control.  Lantas is a good product, but I wish it worked better and for the full 24 hours.  I used to take 75 units at bedtime, but after losing 95lbs, I only take 25 units of the Lantas.  That was exciting to be able to lose enough weight to lower the does. I was hoping to get off of all of it, but I am still working on that.