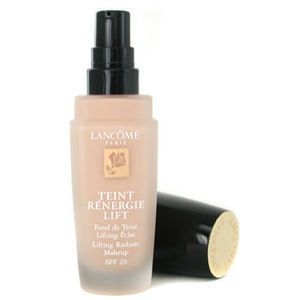 I have tried a few other foundations with mixed results. I splurged on Lancome foundation. It was so worth the extra money. It covers my skin beatifully. It is so easy to apply and looks flawless. The real test was the day I wore it working in the yard over the summer. Hazy, hot, and humid, 90 degrees out, and when I finally came in, I couldn't believe it. It was still covering so well. That in itself sold me on this product. I will be purchasing this product for a long time to come.

I use LacomeRegengie Lift SPF mostly because of the SPF.  I have had a hard time finding a make-up that has SPF and is still good coverage.  I use other Lacome products and am always pleased.  The price is a bit high so I don't use it everyday.  I switch between other make-ups that aren't as greasy but have no SPF.  I would say that it is something I treat myself to rather than something I just buy as soon as i am out.  I think the high price is not warentted. It is my oppinion that it is worth it to buy Lacome Regenie Lift 20 SPF to protect your skin while covering your flaws.

I notice that a frequently used tag here at ViewPoints (and one that I respect very much) is "Beauty Diva."   Well, I am **NOT** a Beauty Diva.  My face looks more lived in now than it did 50 years ago and that's fine with me.  It seems to me that -- with the passage of time and life itself, my skin's resiliency and flexibility has begun to take a beating so yes, there are lines and even wrinkles on what was once smooth, uncharted terrain and bags under my eyes which are my reward for the late hours (and sometimes all-nighters) which I have pulled since I retired and don't have to get myself into an office every morning.  Losing nearly 30 pounds recently was a good thing but not without certain facial skin issues.  **Those things don't really bother me.**   It's not that I've given up as much as I have become accustomed to my face.  Although I continue with moisturizers and makeup, **it's okay with me **if I look older than I used to.  I'm not saying that's a morally superior route or a way of life that is better than anyone else's but my point here is that if you hear **me** getting excited about a cosmetic, you can bet that it is really exciting and ***Lancome Renergie Lift Makeup with SPF 20 ***is one of those cosmetics! **NOW EVEN I'M A BELIEVER!** The other day I used up my old faithful bottle of Lancome Maquicontrole (now officially extinct).  Somewhere in my dresser drawer was stashed a back-up supply but time was fleeting and it was easier to grab that bottle of ***Lancome Renergie Lift Makeup with SPF20 ***out of the medicine cabinet where it had been lurking for several months.  "What the Heck?" I thought, I'd give it a try. **WHAT THIS IS:** ***Lancome Renergie Lift Makeup with SPF20 ***is foundation tinted to match skin tone (my choice was ***"Clair 30"***) packaged in a glass bottle equipped with a black plastic cap which covers a pump apparatus.  My guess is that some alert research person at Lancome realized that this foundation would quickly become almost impossible to pour once the bottle had been opened, hence the pump.  ***Lancome Renergie Lift Makeup with SPF20 ***contains the active ingredients of 7.5% Octinoxate and 3.2% Titanium Dioxide.  **WHAT HAPPENED TO ME:** Hastily, I applied moisturizer and began to slather on ***Lancome Renergie Lift Makeup SPF20***, which is when I learned the hard way that -- while many things can be done quickly -- this is not one of them.  ***Lancome Renergie Lift Makeup with SPF20 ***is thicker than the foundation I was used to and tended to thicken up even more as I rubbed it into my skin.  Indeed if I hadn't been extra generous with my application of moisturizer, I could have hardly spread this ***Renergie*** stuff around at all.  (So you might not want to use this if you are rushing through your routine.)  I finally finished to my satisfaction, added touches of blusher, stared in the mirror and wondered what the big deal was supposed to be.  Then I continued on getting dressed and ready to leave, while the new foundation seemed to be drying and tightening on my face.  Before I left, I dodged once more into the bathroom for one last pit stop and as I washed my hands, I just happened to glance up into the mirror and **HOLY SMACKERS! ** Something in ***Lancome Renergie Lift Makeup with SPF20  ***had apparently congealed and acted as a reinforcement to the tired supportive tissue in my skin.  As the ***Renergie*** dried and constricted, it had raised my skin back to where it once had belonged.  My face looked at least ten (and maybe more) years younger. ** THIS STUFF WORKS**!  Even though I'm not a Beauty Diva, I was so surprised that I nearly lost my balance and almost pitched headfirst into the tub! **MY VIEWPOINT:** The next day, I found my back-up bottle of Lancome Maquicontrole and started using that again because it is much easier to apply to my face.  When I look into my future, I don't see myself fussing around with the extra effort and time involved in using*** Lancome Renergie Lift Makeup with SPF20*** as a daily routine but you can bet that I will truck it out for special occasions like doing lunch with old friends and how **about** that jury duty summons downtown on Oct. 4th?  I'm definitely going to use ***Lancome Renergie Lift Makeup with SPF20 ***on that day and I must say that I will be gratified if the Sheriff who greets me at the security checkpoint follows her glance at my State I.D. photo with an incredulous second look at my now much younger looking face.  If that means I'm becoming a beauty diva, then I might as well plead guilty!

I've tried Lancome foundation and it's just awesome. First of all it covers very well. Second, it doesn't dry..at all. And last but not least, it doesn't get all nasty on the face after a day's wear. Try it.

My mom actually recommended this product to me.  She just started using it and told me that she likes it.  I am not a person to wear a lot of make up and rarely wears foundation but the lift part of the it appealed to me (starting to get older).  I also liked that it had a 20 spf in it.  I am really bad about putting on sunblock, maybe on my nose but not the rest of my face so to have a cosmetic that i could use to help protect me from the suns rays was great.  My problem is i feel it is a little too cakey, but i am not used to wearing make up so maybe it is just me.  My mom really likes it and she says she can see a definant difference compared to the make up she was using.  I am still young enough that i dont need a huge lift, but i am afraid it is coming soon, so i am hoping that i am heading some of those problems off by using it early.  the lancome product line is one that my mom swears by so it gives me a lot of confidence in the make ups claims. the make up is a little expensive but if it works i guess that is the price you pay.

well my mother was the one who had bought lancome renergie lift make up spf 20**.** Well one day the make up i usually wear i really couldnt find it and so i ended up using my mothers and i used the lancome make up and was amazing my skin was so flawless without any dry spots and so light whieght and made my skin feel so soft. after that i started using it myself. It also makes your cheekbones look higher thats a double plus. =]

I am not a rich person, but I have found that buying the "better" (high end) makeup always works better. I adore Lancomes make up - several types - This one, Reenergy lift is excellent. Covers well, not heavy, makes skin look better. I dont see the "lift" so much, but hey, I will take it anyway!  Heres a trick: mix it with another drug store makeup- will last longer. I like the sunscreen added...good idea...but its the coverage that I really like. Worth the money, ladies!

Its a good product for youor skin from a good brand name. Its is not cakey and adds a hint to it. It has sunscreen which is great and you can simply waer this with just a hint of makeup for that less is more kind of makeup. The best thing about your face is your skin so if this helps covring some imperfections well its good. :) The only thing I am worried about is the price.

I have a VERY hard to match skintone.  It's a nice brazilian color in the summer and fairly pale in the winter.   I stumbled into the Lancome counter at a local department store.  The perfectly made up salesperson took her time to match my skintone.  She provided me samples to take home so that I could try different colors.  Thankfully she was of spanish descent and her complexion was almost exactly as mine.  I lucked out with the Regenerie Diore number 35.  As soon as I put it on my skin the color melts right in. The makeup never cakes up and looks very natural.  It provides coverage, feels good, moisturizes and is pretty much still on after 8 hours of work.  Thumbs up to Lancome.  Yes, it's more expensive than drugstore brands but I've tried SO MANY foundations on the market.  I have a bathroom full of them and this one works.

lancome renergie lift make up i love. at first not to sure about it but from the first use people keep giving me compaments. a little pricy but very nice. would buy it  again if can afford it lol. I love how much it coves and last for quiet awhile, I have really got adiccited to the products I would love to buy it for all the women in my family as gifts they would all love it.